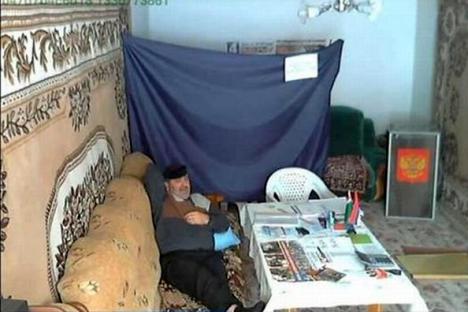 Russian Internet users enjoyed watching the voting process online. They would now like the authorities to keep the webcams on.

Some of the cameras provided glimpses into life in far corners of Russia. Images from webvybory2012.ru

Two carpets on the walls, plastic chairs, a service cap on the couch, a table with heaps of documents on it and a curtained corner for voting – this private household in the Chechen village of Mesedoi caught the interest of a huge number of Internet users who were monitoring the voting in the Russian presidential election. There is no school in the village that could be used as a voting place, so locals traditionally come to vote at the house of Shaya Yunusov, head of the local election commission. Voters are asked to take their shoes off when they enter the polling station.

Besides performing its main function – to secure election transparency – the vast network of webcams put in place on the initiative of Prime Minister and President-elect Vladimir Putin also brought home to many Russians the size of their country. Some of the cameras, which began transmitting videos from polling stations late on Sat. March 3, provided glimpses into life in far corners of Russia, including late night school dances.

During election day, March 4 March, 2.5 million voters who had previously registered on webvybory2012.ru exchanged links to live broadcasts from all across the country – a ballot box installed in a small village had a very narrow slot and required the voter to use a ruler to push the ballots inside; there were voters dancing the Lezginka at a polling station in Chechnya; and on one camera, viewers could watch as prominent journalist and public figure Leonid Parfyonov – registered as a monitor in his native Cherepovets – talked on the phone for 15 minutes. Some voters sang in front of webcams and some danced.

Residents of some Russian regions used the live broadcast to pass on greetings to their relatives. The sound quality on the webcams was quite poor, so many Russians called friends and relatives on their cell phones to say: “Hi there, watch the webcam in our school, I’ll wave at you.” The most advanced users accessed the webcams from their phones and took pictures of themselves casting votes.

“Mr. Putin, will you please keep the webcams on. It is really exciting. I was too busy and missed the people in Chukotka and Khabarovsk. But I saw a woman waiting for voters while sitting on a sofa in Morskoe village on the Curonian Spit. I observed a political hassle in a minimart somewhere in Penza Region. I saw the polling station in my own school, which I have never had a chance to visit in the last 15 years. It is a big country,” wrote a blogger called senism.

The webcams never quite turned into a funny clone of the Chatroulette online chat site, but they did affect the election results. The Central Election Commission (CEC) cancelled the results of the vote at a polling station in Dagestan where ballot stuffing was observed. The CEC gave a different reason officially, but the polling station came to its attention because of the webcams.

The webcams did not broadcast the entire vote counting process, which left room for possible rigging during several election phases, but they did cause the voting procedure to become more transparent. Some bloggers, intent on identifying incidences of fraud, interpreted the mandatory test of electronic ballot boxes as ballot stuffing. Other Internet users were indignant at the “impassive and cynical” face of the man who fed ballots into the machine one after another. The Central Election Commission had to explain to the Internet community how the test worked. “Webcams have really complicated many people’s lives: some found it hard to stuff the boxes and some to shoot “shock!stuffing!” videos. Praise the robots!” writer Sergey Minaev tweeted.

The webcam project, which cost the country 13 billion rubles ($444 million), was completed on a very tight schedule and successfully managed the high traffic load. The system was commended by Minister of Communications and Mass Media of Russia Igor Shchegolev. “In normal operating mode, we managed to access 99.3 percent of the polling stations where webcams were installed, with only minor deviations”, the Minister said. According to him, the website was accessed 500 million times on March 4.

Furthermore, owing to the webcam network, some distant corners of Russia, where weak communications channels threatened the webcam monitoring system the most, finally obtained access to the Internet. These channels will be used subsequently to deliver educational content to schools.

On Sunday night, the Yunusovs were having dinner in their house in Mesedoi village. Shaya’s six-month-old son was crawling under the table and the family members were having a quiet conversation. They did not think that several thousand people could be watching them at that time. The election was over and life in the country went on.