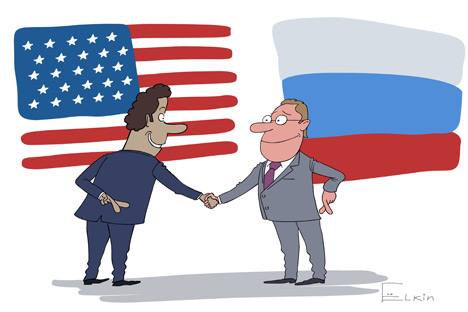 After Vladimir Putin's election for the Russian presidency American politicians started demonizing Russia and questioned U.S.-Russia reset. In the midst of the American presidential campaign the future of the Russian-American relations is at the top of the political agenda.

Only a few months ago, the consensus among Russia-watchers was that the return of Vladimir Putin to the Russian presidency would have little impact on U.S.-Russia relations.  Andrew Kuchins of the Center for Strategic and International Studies predicted back in September 2011: “The possible election of Putin as the president of Russia will not signify a fundamental change in the direction of U.S.-Russia relations."  But at the beginning of March, Kuchins concluded that the "reset" in U.S.-Russia relations was over and that "Washington should prepare for a far more contentious relationship with Moscow."  Quite a change, isn't it?  What went wrong?

Arguably, there are enough contentious issues between Washington and Moscow, starting with European missile defense.  Russia genuinely considers the future deployment of anti-missile defense systems in Eastern Europe as a serious threat to its security, and the Kremlin sees no reason to hide its concerns.  Speaking at a meeting in December 2011, Russia’s then-Ambassador to NATO Dmitry Rogozin warned that the country was facing a danger of becoming “easy victim” at the hands of some (unnamed by Rogozin) hostile forces.  Rogozin’s words shouldn’t be taken lightly: shortly after delivering this speech, he was appointed deputy prime minister in charge of the military-industrial complex; rumors in Moscow were that this appointment was lobbied for personally by Putin.

Then Putin himself invoked the image of the enemy at Russia's door by accusing U.S. Secretary of State Hillary Clinton in inciting the street protests that followed the Dec. 4 Duma elections.  Subsequently, in one of his seven election manifestos published in the Russian press, Putin made it clear that he considered the United States an unfriendly (“destructive”) force guilty of “democracy promotion” at gunpoint.

In Russia, subordinates always try to outdo the boss.  Taking Putin’s words as a nod, Prosecutor General Yury Chaika alleged -- without presenting any specific evidence -- that the December protests had been financed from abroad.; Vladimir Popovkin, head of Russian space agency Roskosmos, attributed the failure of the unmanned Phobos-Grunt probe to the action of American radar; Chairman of the Duma Committee on Foreign Affairs Alexei Pushkov suggested that the United States was keenly interested in destabilizing Russia and would make every effort to weaken Russian government; and high-ranking United Russia party official Andrei Isayev went as far as to warn his compatriots that in 2012, they will face a “new battle for the freedom and independence of Russia against attempts by the United States of America to establish control over [the] country.”

The rising anti-American rhetoric in Moscow was followed closely in Washington.  But it wasn’t until the vote on UN Security Council resolution on Syria that the simmering tension broke into the open.  The U.S., along with 13 other members of the council, voted in favor of the resolution calling for Syrian President Bashar al-Assad to step down.  Russia and China blocked the resolution on the grounds that it would invite Libya-style military intervention.  Shortly thereafter, verbal shots flew over the Atlantic: Clinton called the Russian veto “despicable;” Russian Foreign Minister Sergei Lavrov characterized this reaction as “hysterical.”

Curiously, many people in Russia seemed to sincerely believe that the escalating anti-Americanism was no more than a verbal excess of the ongoing presidential campaign.  Naturally, they expected that once the election campaign was over, U.S.-Russia relations would rapidly return "to normal."  So when on March 6, Lavrov finally spoke on the phone with Clinton – "in a call that officials said had a 'get back to business' tone," according to New York Times – the sense in Moscow was that was that.

Well, it wasn’t.  In the heat of the presidential campaign, folks in Moscow have apparently forgotten that the United States was going into a presidential election campaign of its own and that critics of President Obama are looking for any opportunity to attack him.  For months, the president’s opponents have been painstakingly collecting every available evidence of his ”failed” Russia policy: the lack of progress on missile defense and Iran nuclear program; Russia’s support for Syria; harsh treatment by Russian state media of Michael McFaul, the new U.S. ambassador to Russia; the parliamentary elections in Russia that many in the U.S. consider undemocratic.  All this logically came together after the March 4 presidential vote against the background of the “aggressive” anti-American statements.

In the coming months, Moscow will be watching how anti-Russian rhetoric is unraveling in the U.S., and it will hardly like what it sees. Leading Republican presidential candidate Mitt Romney makes no secret that the “reset” is really over if he’s elected president.  Anti-Russian sentiments are widespread in Congress, obstructing the Obama Administration’s efforts to repeal the notorious Jackson-Vanik amendment.  Some hawks have gone so far as to call for Putin not to be invited to the NATO-Russia summit in Chicago in May; they also question whether Obama should hold a bilateral meeting with Putin during the G8 summit at Camp David.

It remains to be seen how Moscow will react to this “symmetric response.”  Putin’s third presidency has undoubtedly damaged Russia’s reputation in the world and also complicated the political situation at home.  With its number of friends dwindling, the Kremlin may well decide to keep a good trusted enemy, whose image at the door – ready to break in – could help solidify whatever is left of the proverbial “Putin’s majority.”  In the Kremlin’s calculation, the cost of policy of the “reset” – which continuation demands certain level of trust in the U.S. partner – might have already outweighed its benefits.  One can be sure that if Putin did cry during his victory speech at the Manezh Square, he cried not over the death of the “reset.”