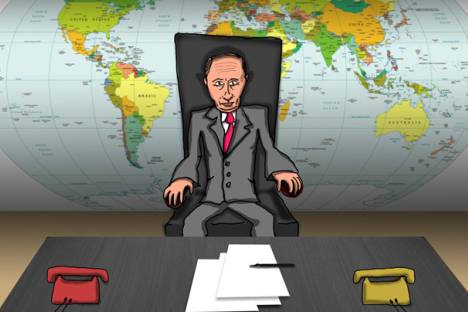 RBTH offers a series of opinions from experts who talk about Russian Prime Minister Vladimir Putin's latest article on the country's foreign policy.

Edward Lozansky, the president and founder of the American University in Moscow, special to Russia Beyond the Headlines.

In his article, Putin presented his vision on major foreign policy issues and I believe it was not just pre-election rhetoric to get higher ratings. I consider his position quite reasonable, realistic and mutually beneficial for U.S. and Russia. Some of his proposals, like offering direct help in Afghanistan, is pretty sensational since for the first time it offers direct Russian military involvement in this area.

Let me underline several major points that I believe are the most important in Putin's article:

1.Iran's right to develop a civilian nuclear program must be done in exchange for putting all Iranian nuclear activity under reliable and comprehensive IAEA safeguards.

3.Russia's willingness to consider much greater participation in the relief operation for the Afghan people, including anti-drug measures inside Afghanistan to block the routes of drug transportation and financial flows. It is obvious that these activities assume the use of Russian military for the first time since their withdrawal from that area more than 30 years ago.

4. I am especially pleased with Putin's assertion that Russia is an inalienable and organic part of Greater Europe and European civilization and that Russian citizens think of themselves as Europeans. This has important and deep philosophical and psychological meaning with far-reaching implications.

5. Finally, for the first time Putin is using such word as "alliance" when talking about the U.S. For me, it is very important, since our organization's mission is to build a U.S.-Russia alliance. This is why, in Putin's words: "If we had managed to achieve a breakthrough on missile defense, this would have opened the floodgates for building a qualitatively new model of cooperation, similar to an alliance, in many other sensitive areas." This should force the U.S. foreign policy establishment to think again and again before dismissing these statements from Putin in order not to repeat all our mistakes on Russia policy for the last 20 years.

Gordon Hahn, Senior Associate at Center for Strategic and International Studies (CSIS) in Washington, D.C., special to Russia Beyond the Headlines.

There is no doubt that Russia under Putin or any other Russian president who is not a ‘dyed in the wool’ Westernizer will oppose NATO expansion, U.S. AMD plans, and the loose interpretation that the West has afforded itself when it comes to intervening in the internal affairs of other countries. The view of the Russian majority – elite and public alike – is that U.S. and NATO undermine Russian security, the principle of state sovereignty, international stability by expanding NATO, establishing missile defense, and taking unilateral humanitarian interventions without or exceeding UN authorization.  I see no opportunity for changing the Russian calaculus in this regard, unless major asymmetrical concessions are made in other areas.  Putin’s article again made it quite clear who Putin believes in undermining international security, it is the U.S. and its NATO allies.

Russia's stance on Syria, American missile system in East Europe and Iranian nuclear program - all these issues  continue to be the deathknell for the ‘reset’.  If a crisis or war with Iran can be averted and the Arab ‘spring’ be stabilized, then perhaps a steep decline in U.S.-Russian and Russian-West relations can be avoided. This might also allow Putin to retain and even expand Medvedev’s accomplished and proposed reforms, given growing public pressure on him to do so, removing another stumbling block in Russian-West relations.

Nikolai Zlobin, Director of Russian and Asian Programs at the Center for Defense Information, Washington, DC, first published in Forbes.ru

The first comments on the article said something to the effect that Putin’s remarks were too aggressive towards the United States and the West. I disagree with this point, but still there are some things that I dislike. First of all, the article has no section covering Russia’s policy on the former Soviet Union, although the official doctrine makes this vector a priority in Russia’s foreign policy.

Second, I disagree with what Putin said about “soft power” (achieving foreign policy goals without use of arms but by producing information and exerting other levers of influence). It seems to me that this is an increasingly important instrument in contemporary foreign politics, and Russia must make use of it and develop it. We should not criticize this instrument, but utilize the potential that “soft power” has to offer. I do not, however, think that this article should cause concern in the West or elsewhere.

Alexander Gabuev, a political columnist and staff-reporter for Kommersant daily. The original version of his column is available in Kommersant.ru

Putin’s  latest article, Russia and the Changing World, shows that presidential candidate Putin 2.0’s foreign political efforts in no way differ from those of President Putin 1.0.

From the first lines of the article, Putin promises a foreign policy that will proceed “from our own interests and goals rather than decisions dictated by someone else” and will reflect “Russia’s unique place on the world political map." The same good old villains naturally pose the main threat to the motherland. Asking who could be dictating these interests, Putin immediately finds the only correct answer – the United States and NATO. It is their interference in the internal affairs of sovereign countries that is the root of all evil. The article follows the pattern of his 2007 Munich speech.

Interestingly, Putin’s article makes almost no mention of the four years of Dmitry Medvedev’s presidency and his somewhat different approach to foreign policy. Medvedev’s pet word, “reset,” is never mentioned anywhere in the article. In the meantime, despite certain inconsistencies, during Medvedev’s rule, diplomats were for the first time set clear and appropriate goals – foreign policy must work for the economy of the country and aim at ensuring friendship with the right partners, regarded as sources of investment and technologies for closing the growing gap between Russia and all its big neighbors.