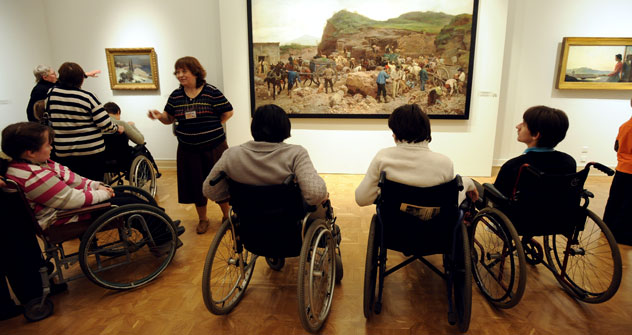 Two women in St. Petersburg have established a travel company for people who cannot get around independently – fulfilling both their own dreams and those of their clients.

Maria Bondar and Natalia Gasparyan bonded as girls over similar spine injuries. They acted in school plays together, and in their final year, they started to dream about having their own business. But they went on to university – Maria graduated from the German department of the Philological Faculty at Leningrad State University and Natalya trained as an economist at the Technological University of Natural Polymers, and worked on the side as interpreter-guides for German tourist groups visiting St. Petersburg.  They began to notice many foreign tour groups included travelers in wheelchairs – and that many tour guides would just as soon avoid such tourists.

“The majority of tour guides were horrified to find them in a group, because it meant ten times as much work,” Maria Bondar recalls. “You had to make sure that a tourist like this didn’t get left behind, and it often meant pushing the chair yourself.”

But unlike the majority of their colleagues, the two friends were very happy to help the wheelchair users, and in 2004, Maria and Natalia decided that this was the basis for a business.

A normal tour consists of showing people the sights and organizing meals, hotel accommodations and evening programs. But organizing this kind of tour for a wheelchair user in St. Petersburg was next to impossible. First of all, at that time, St. Petersburg had no hotels with doorways wide enough for wheelchairs, let alone rooms with special showers or ramps. So Maria and Natalia decided to limit themselves to clients visiting with city on Baltic Sea cruises – tourists with free time in the city, but accommodation on board the ship.

In order to determine how much of the rest of a regular St. Petersburg tour itinerary would be accessible for people in wheelchairs, the friends decided to try out a wheelchair themselves.

“We got a wheelchair, sat each other in it and made our way round the city, trying to get into museums and churches so that we could find out whether disabled people would be able to negotiate them,” said Maria Bondar. Each visit was a real test for museum staff. Although a museum might have special wheelchair lifts, in most cases, they had never been used. Most of the museum staff were sympathetic to the young entrepreneurs and sincerely wanted to help, but there were some notable exceptions. “Wheelchairs? Over my dead body! I’ve got 18th-century parquet flooring,” one museum director told the women.

In other cases, it was only thanks to the entrepreneurs’ stubbornness that some sites became accessible to disabled people. In the case of one of St. Petersburg’s famous palaces, it was necessary to give a week’s notice of arrival in order to use the lift, and even then, the visitors were required to arrive at the lift at the exact time scheduled.

“If we were just a little bit late, the staff member would shout,” Maria said. “They had to come from a neighboring building just for a pair of wheelchair users, while the palace was experiencing a flood of visitors.”  The whole process was so unpleasant and complicated that Maria was ready to give up and cross the palace off the excursion itinerary. But Natalia was uncompromising. Now, the entrepreneurs take pride in the fact that there is a separate lift for their clients and they are met by a special concierge service.

It took the women about a year to research and plan the itinerary. The first destinations on the future route were the Russian Museum and the Hermitage, which were more or less equipped technically, and then they added the Museum of the History of Religion. Ravilya and Pyotr Morozov and Yury Kuznetsov, founders of We’re Together, a St. Petersburg-based organization for disabled people, began helping inspect properties for wheelchair accessibility, and they became co-founders of the tourism firm. The group decided upon the name “Liberty.” Natalia and Maria began promoting the company through similar tourist agencies in other countries and social networks.

The friends led the first excursions themselves. There were some hitches, of course. When Maria was unable to get a German woman in a heavy wheelchair up three steps into the Cathedral of the Saviour on the Spilled Blood, her husband built a portable aluminium ramp.

In 2007, the joint owners of Liberty took a loan for the first time in their lives, borrowing 750,000 rubles (about $ 26 000) from Sberbank. They used the money to buy a truck for transporting fruit. Maria Bondar’s husband, a professional car mechanic, converted it for passenger transport. He cut out windows, fitted sound and heat insulation, lined the sides, put in single seats by the windows and left a space between them big enough for a wheelchair to get through. But he was especially proud of the lift – a special platform that could lift a wheelchair up to the level of the bus. “Our vehicle was incredible for Russia – even foreigners were delighted that we, who were novices in the market, had such advanced equipment,” said Maria.

Liberty wanted to offer tours to disabled Russians, but the majority of Russian wheelchair users have very low incomes. The firm decided to charge foreigners more in order to provide discounted tours to Russians. The group has hosted tourists from Germany, Austria, Switzerland, the United States, Canada and Israel. In addition to St. Petersburg, Liberty organizes tours of Moscow, the Moscow region and Novgorod. The cost of the tour (excluding tickets) is 100–400 euros  (about $ 130-523) per person for two-day tours and 1,000–2,000 euros (about $ 1,308-2,616) for one-week trips.

Winning the Vagit Alekperov Foundation’s “Our Future” competition enabled Liberty to obtain an interest-free loan of 1.72 million rubles  (more than $ 58,000) for four years. The company used this money to buy air conditioning for the minibus and developed itineraries in more cities, for example in Kiev. Future plans include purchasing a new, modern bus which will cost about 2.5 million rubles (about $ 85,000), including alterations. A major international pharmaceutical company has approached the foundation, expressing the desire to help with buying the new transport for Liberty.

This year the company is planning to expand its offerings to tourists who are deaf or profoundly hard of hearing. For this the friends need to invest in equipment for signing. “And later,” said Maria, “we’re ready to create a whole empire.” Her ideas include a hostel and a chain of night clubs accessible to everyone, including people with disabilities, a fleet of specialised buses, a TV magazine about wheelchair journeys and a guide to St. Petersburg for people with disabilities.