Ski resort with a past gets a reset 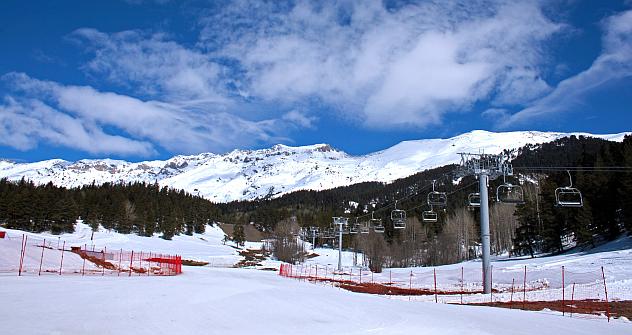 The first chair lift and two trails opened March 18 in the North Caucasus resort of Arkhyz. Alexander Khloponin, presidential envoy to the North Caucasus Federal District, was the first skier to come down the slopes. In a celebratory speech afterwards, he noted that while this was certainly a signal event, “there is still much more to do.”

Photos by Vsevolod Pulya. You can see the bigger version of slideshow here.

Jam made from pine cones, Cossack fur hats, mountain herbs for tea drinking, sweet homemade wine: these are the sorts of souvenirs tourists bring back from Arkhyz. At local stands they can also buy refrigerator magnets showing snowboarders and skiers against dramatic mountain backdrops. In reality, however, there aren’t any ordinary skiers on the slopes yet. Construction of the Arkhyz Resort has only just begun: instead of hotels there are improvised camp sites, there is almost no cell phone coverage, and there was no point paving the 8.5 miles road to the resort ahead of Sunday’s opening since the heavy construction trucks would destroy it in a matter of weeks.

Before the construction began, the only people who came here in winter were extreme skiers with plenty of money – or at least enough to hire a helicopter to drop them at the top of Arkhyz’s virgin trails. In the summer, mountain biking and rock climbing without the necessary infrastructure attracted only the daredevils.

But Arkhyz, which gets some name recognition from a widely distributed mineral water of the same name, is a resort with prospects. In the local dialect, Arkhyz means “beautiful girl,” and a glance at the landscape is enough to see why. Arkhyz is also in a very convenient location: less than four hours by air from most countries in Europe, Asia and the Middle East. The nearest international airport, in Mineralye Vody, is only 125 miles away; the region also plans to build some smaller airports for private planes.

Many of those who attended the opening ceremony at Arkhyz sported hats and scarves bearing the Latin words per angusta ad augusta, which means “through ravines to the heights.” The real heights at Arkhyz are still to be scaled. The new four-seat chairlift takes skiers up only 377 feet, to an altitude of 5,800 feet; the resort itself sits at an altitude of 5,400 feet above sea level. The first two trails are 2,200 and 3,600 feet long. The next stage — construction of five hotel complexes with 700 rooms – will be completed by this fall, in time for the start of the new ski season. By then, the combined length of open ski trails will be almost four miles. These figures may seem modest to inveterate downhill skiers, but these are just trial balloons. Arkhyz has more ambitious plans. “The real work on this resort will begin at the end of the year when we propose specific sites to investors,” Khloponin declared at a post-ski press conference.

The builders say that when it’s finished, Arkhyz will be comparable to Les Arcs, the French ski resort in the Alps. All told, eight years from now, Arkhyz will consist of four tourist complexes housing a total of 24,000 guests; 54 ski lifts able to carry 45,000 skiers a day; аnd ski trails totaling 167 milres in length. All of this will be available with a single ski pass. At Resorts of the North Caucasus (KSK), the company in charge of developing the tourist cluster in the North Caucasus, specialists say that once Arkhyz is finished and in full operation, it should draw more than half a million skiers a year.

The first goal of the resort is to make downhill skiing affordable for averages Russians. “Resorts in the North Caucasus cluster should not compete among themselves,” said Alexei Nevsky, general director of KSK. “We have to develop a single concept, a single marketing and price policy.”

This project also has a social mission: it will create 10,000 jobs in the Republic of Karacheyvo-Cherkessia, according president of the republic Rashid Temrezov. At any rate, local grandmothers are ready to take in guests: their homemade meat pies and wool socks are already selling well.

60 glaciers and mountain lakes are located in the valley

12 waterfalls crash down from the Sophia Glacier

170 km (105 miles) is the length of the resort’s main waterway: the Zelenchuk River

+14.8 Celsius (58 Farenheit) is the average air temperature in summer

- 5.6 Celsius (21 Farenheit) is the average temperature in winter

The Arkhyz Gorge is protected from strong winds and blessed with a mild climate. Its alpine slopes are covered with dense stands of fir trees and pine trees and it is the home of 26 natural mineral springs.

Meanwhile, for non-skiing tourists or those who want a break from the slopes, there are some unique local excursions. A mysterious natural icon of Christ is carved right on the steep left bank of the Zelenchuk River. Christ’s face looks down on ancient churches and the remains of the ruined city of Maas. The oldest of the churches was built 1,200 years ago, making it the most ancient religious edifice in Russia.

Thirty-seven miles to the west of Arkhyz is Adyukh Mountain, which has a small tower on its summit. The mountain and its fortress were named in honor of a girl who, as legend has it, was so unhappy in love that she threw herself off the mountain top; another legend claims that she threw off the rope ladder on which her unfaithful lover, a horse thief, was climbing. Visitors able to climb the 730 steps up to the top will be rewarded with a magnificent view of the Zelenchuk River and surrounding valley — the horizon stretches away to Abkhazia.

At the foot of Mt. Adyukh is the Adyukh Palace Hotel, whose owner is a veteran collector of antique automobiles. His collection includes a 1950s Mercedes, and old UAZ that has not driven even one mile in all its 40 years of existence, and a complete collection of Volgas, Chaikas and ZIMs.

The Legend of Caucasus - watch video

Arkhyz is KSK’s debut project. By 2020, KSK plans to have fully developed this tourist cluster with world-class ski resorts throughout the North Caucasus. Meanwhile, Dagestan’s Caspian Sea coast will be dotted with beach resorts. When construction of the cluster is complete, it will boast a combined total of 680 miles of downhill ski trails and 227 ski lifts, as well as hotels, apartments and cottages for 102,500 people.

KSK anticipates that this cluster will receive between 5 and 10 million vacationers every year. The total volume of federal investment in the transport infrastructure and communications of resorts in the North Caucasus should equal 60 billion rubles ($20 billion). The Sinara Group, an investor in and builder of Arkhyz, put up 1 billion of the 3 billion rubles already spent on building the resort and its infrastructure. The project’s financing is being conducted on the principles of a government-private partnership. The project will receive a total of 80 billion rubles ($2.7 billion) in investment.

These Russian investors are expected be followed by foreign investors; investors from France and South Korea have already signed agreements on a joint enterprise, according to Nevsky. He confirmed that the South Korean company Korea Western Power is ready to invest $1 billion in the cluster’s electricity supply network, while the investment bank Singapore Nexus means to invest in the development of hotels.