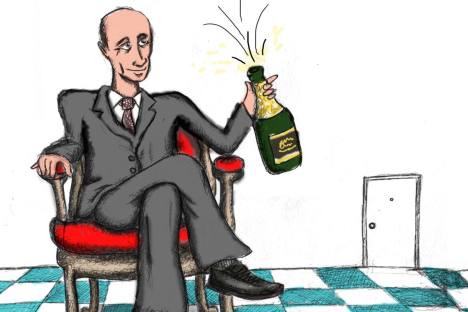 What will Putin’s new presidential term – officially the third, but actually the fourth – be like? Will we see Putin 2.0 reloaded or will the regime collapse and the world witness a third Russian revolution in 100 years?

Watching television reports about the rallies calling for fair elections, the Western audience might get the impression that Russia is on the threshold of an Arab Spring, as Senator John McCain wrote to Putin, and that there might still be a rerun of the presidential elections under pressure from the street.

Yet inside Russia, everyone – from Putin to his fiercest opponents – knows this is not the case. The game is over and the results are not subject to revision. Under the new law, Vladimir Putin has been elected for six years. His power is absolutely legitimate, impeachment by the Russian parliament is impossible because Putin’s party holds more than 50pc of the seats, and there is no other way that Putin can be removed.

As for revolution, this is extremely unlikely in today’s Russia. The shock of 1917, which upset the course of Russian history, has yet to wear off, so even the most rabid members of the opposition repeat the mantra “anything but revolution”. As for Russian pro-Western liberals, they are terrified of revolution because they have little doubt that the liberated people would give them as rough a deal as in 1917.

No matter how scathing the liberals might be of Putin, they are even more afraid of the people. Such revolutionaries will obviously never stage a revolution.

So, after being legitimately elected, Putin will remain in office until 2018, during which time no one will be able to overthrow him. Unless, of course, he decides to quit himself.

Now let us take a look beyond the propaganda myths at what Vladimir Putin is  really like. The myth about Putin as a cold-blooded and cynical individual is far from the truth. In reality, he is emotional, sensitive and even touchy. At a rally after his resounding victory in the presidential election, he was crying. Even if one assumes the tearfulness was planned, there can be no doubt that he was very emotional.

The view that Putin is a dictator concerned only with personal enrichment does not stand up to criticism either. Putin is 59 years old and has been leading Russia for 12 of them. If he were concerned only about personal gain, he had a wonderful chance to leave the post of president after negotiating firm guarantees for his safety – which is what Yeltsin did in 2000. The fact that he stayed, despite realising that lean years probably lie ahead, shows he is not guided by his selfish personal interests but by a sense of mission – Russia’s mission.

Putin has a profound faith in Russia’s great mission, just like the US, Britain, China or any other great country believes in its own great mission. Having worked in the wild Nineties, he felt Russia’s disgrace deeply when it was weak. As a former KGB officer, he believes the root of Russia’s woes is unfair competition, above all from the West, which traditionally dislikes and is afraid of Russia. On all these issues, Putin has solid popular support, as many Russians think along the same lines.

Putin values personal decency and loyalty and considers himself to be a man of his word. He promised to appoint Medvedev as prime minister and he will keep that promise. Putin, who made a dizzying career within a few months (1998-1999), cannot but believe in his star. I think the successful years of his presidency (up to 2008) further reinforced his confidence. Perhaps that is why he reacts in such a morbid way to what he regards as a challenge to his power. Having enjoyed genuine popular love, Putin is sensitive to changes in society’s mood. The demonstrations apparently hurt him deeply.

What policies can we expect in the foreseeable future? Putin will try to divide and rule: part of the opposition has already been recognised; they have been allowed to register their own political party and will take part in elections. Will Putin allow greater freedom of expression? During the elections, it became clear that he had no reason to be afraid of such freedom. Putin has been criticised a lot, but that has only helped him. If he controls the overall situation, criticism can even do him good as people begin to sympathise with him and feel angry at his critics. It’s a simple recipe: keep overall control and allow freedom to criticise within limits.

Putin will not share real power but will appoint top officials. He will turn a sensitive ear to public sentiment, especially on social and economic policy. For example, he will do everything possible to avoid raising the retirement age.

Thus, Putin vintage 2012 will be a president who keeps real power firmly in his own hands, expands public political freedom, puts his faith in patriotic propaganda and judicious social policy.

Leonid Radzikhovsky is a columnist at Rossiyskaya Gazeta. An expert in political technologies, he has advised many senior politicians in their election campaigns.