BRICS: A bridge across three oceans 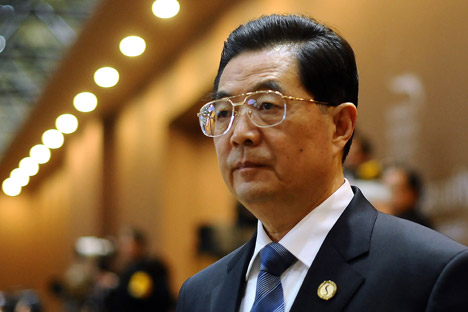 On the eve of the fourth BRICS summit, held in New Delhi, India on March 28-29, Chinese President Hu Jintao sat down with representatives of leading media outlets from the BRICS countries, including Andrei Artemyev of Rossiiskaya Gazeta.

Rossiyskaya Gazeta: What does China expect from this meeting?

Hu Jintao: The fourth BRICS summit is taking place against the backdrop of profound and complex change in the international situation. With the recovery of the world economy not certain, the emerging markets and countries continuing to strengthen their place and role in world politics. India, as the country holding the presidency, has done a large amount of fruitful work to prepare for the meeting. China is ready to work together with the other participants towards ensuring its success.

We hope that the summit, like all the previous meetings, will help to strengthen coordination and interaction between the five countries over the financial and economic situation in the world and other topical issues of common interest. We also hope that the summit will issue a strong signal to the effect that steady recovery of the world economy is possible, that the summit will give an impetus to stronger global economic regulation and will contribute to stimulating joint development throughout the world.

It is no less important that the summit should, among other things, succeed in strengthening the institutional growth of BRICS and develop a plan for future cooperation with a view to long-term development of cooperation among the BRICS countries.

R.G.: How does China assess the impact of the emerging markets and countries on the world architecture, considering their growing might?

Hu Jintao: Today, a whole group of emerging markets and developing countries, with their rapidly growing economies, is becoming a considerable force for upholding peace and promoting joint development in the world.

These countries are steadfastly following the path of peaceful and harmonious development through cooperation. They represent an important part of global development, contributing to a more balanced development of the world economy and to international relations becoming more rational, global regulation more efficient and international peace stronger.

Since the international financial crisis in 2008, it has been these countries that have been stimulating global economic recovery by their development. In the process of global economic regulation, they are becoming ever more representative and are having a bigger say in favor of just and rational development of the world order. All these facts provide added proof that general prosperity in the world is, indeed, impossible without a rise of the emerging markets and developing countries, and there can be no peace and stability on Earth without tranquility in these countries. The international community should take a long-term view and support the development of these countries from a strategic high ground.

R.G.: How does China assess the dynamics of cooperation among the BRICS countries, its future areas and the role of the five countries in global regulation? How, in China’s opinion, should the BRICS countries strengthen their collaboration in protecting the interests of the developing countries?

Hu Jintao: The BRICS countries are the champions and vehicles of the interests of the developing countries. Through their cooperation, they are promoting South-South cooperation and South-North dialogue, helping to implement the UN Millennium Goals, promoting early fulfillment of the Doha development round mandate and a bigger voice on the part of the developing countries in global economic regulation, and are opposing protectionism in any form whatsoever. We are convinced that cooperation among BRICS countries meets the objective imperative of economic globalization and democratization of international relations.

[The BRICS summits in] Yekaterinburg, Brasilia, Sanya and New Delhi are witnesses to the constant improvement of BRICS institutionally and formation of a structure for cooperation at many different levels. There is growing mutual political trust and deepening practical cooperation in the economic, financial and trade spheres and in developing other spheres; there are signs of more vigorous activity in agreeing and coordinating our positions on crucial international matters and of a constructive role in global regulation. Cooperation among the BRICS countries can be said to be cooperation with a strong foundation, cooperation with a serious potential and broad prospects.

Cooperation with emerging markets and developing countries, including BRICS countries, is China’s foreign policy priority. We firmly support and take an active part in cooperation within the BRICS format. We are ready, together with the other participants, to multiply our efforts to broaden the range of common interests and upgrade the level of cooperation for the sake of the noble cause of peace and development of all humankind.

During the past year, the BRICS countries, working actively to implement the action plan of the Sanya Declaration, have strengthened their cooperation in such spheres as finance, trade, industry, healthcare, agriculture, statistics, science and technology and between think tanks. The joint work has yielded real benefits for the peoples of the five countries and has consolidated the dynamics of cooperation.

As for development of the cooperation among the BRICS countries, at the next stage, in the opinion of the Chinese side, the priorities should be as follows: first, to consolidate the existing foundations. It is necessary to proceed in the spirit of pragmatism and commitment to high returns in order to make cooperation among the five countries more solid and efficient, creating model projects. Second, we should display enterprise and initiative in our work. It is important, in accordance with the social and economic development needs of the BRICS countries, to seek new spheres of cooperation, reveal the potential for interaction and lend new power and energy to BRICS.

I am convinced that, if all our countries continue to be guided by the principles of openness, solidarity and mutual assistance, working together, the multifarious practical cooperation with BRICS will certainly reach new horizons for the benefit of our peoples.

Hu Jintao: China has strategic partnership relations with all the BRICS countries. The development of links with BRICS partners is one of China’s foreign policy priorities.

Brazil is one of the first developing countries to have established strategic partnership relations with China. In recent years, the two countries have maintained fairly close high-level contacts; political mutual trust is growing and mechanisms of cooperation are improving by the day. It is worth saying that close cooperation and coordination of efforts concern key international and regional affairs.

China and Russia are each other’s biggest neighbors and partners in many fields. Bilateral relations are developing rapidly and are following a healthy and steadfast course. The program for development of Chinese-Russian relations over the next 10 years and a series of other key accords and agreements between our two countries’ leaders are being actively implemented. Diverse cooperation between the two countries in many other areas is gathering momentum.

Strategic cooperation and partnership between China and India have, in recent years, enjoyed all-around development. Sustained, healthy and stable development of bilateral ties between China and India, as two neighboring and major developing countries, benefits not only the peoples of the two countries, but peace, stability and prosperity in Asia and the world in general.

The Chinese people and the people of South Africa have deep bonds of friendship. Ever since diplomatic relations were established, bilateral relations have experienced rapid and all-around growth. We have fruitful cooperation in the political, trade and economic, humanitarian spheres and in international affairs. This is not only in the interests of the two countries, but going a long way to developing China’s relations with the whole of Africa, cementing cohesion and interaction in the ranks of the developing countries. The accession of South Africa to BRICS has made that association still more representative.