Alexander Herzen: A man of the era of awakening 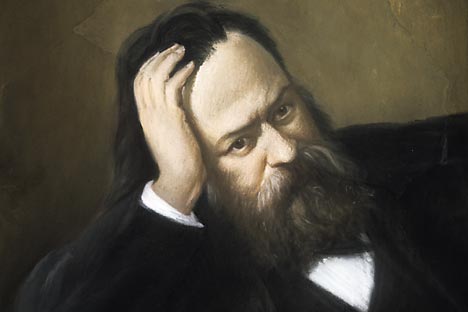 Alexander Herzen, Russia's one of the most prominent dissident of the 19th century. Source: RIA Novosti

This year, Russia celebrates the 200th birthday of writer and political thinker Alexander Herzen. Are his dissident views still relevant given the current state of Russian politics?

Alexander Herzen is hardly famous outside Russia, but a fictionalized version of him portrayed in playwright Tom Stoppard’s trilogy of plays "The Coast of Utopia" is well known. Even in the minds of Russians, Herzen tends to be thought of in the way Vladimir Lenin interpreted him: “The Decembrists awoke Herzen. Herzen launched revolutionary agitation.” But in reality, the 19th century writer wanted no revolution at all, and wrote that the execution of the Decembrists “awoke his soul from a childish dream.”

While still a student at Moscow University, Herzen and his associate Nikolai Ogarev became the center of a circle of thinkers that discussed ideas of freedom and equality. As a result of his association with such people and ideas, Herzen was arrested and spent several years in exile to remote corners of Russia, including Perm, Vyatka, and Novgorod. He did not start any genuinely dissident activities, however, until he was in exile, where he could openly voice his liberal views.

Nevertheless, when Nikolai Chernyshevsky, the author of “What is to be Done?”called for Russians to “take axes in hand,” Herzen responded “It would be nice to first call to take brooms in hand, and let axes lie for now.”

As a matter of fact, Herzen was haunted by disappointments. He started out as an ardent Westernizer. With an appreciation of German philosophy and admiration for French socialism, Herzen traveled extensively in Europe, but was disappointed by the revolutions that rocked the continent in 1848 and their results. His faith in the potential of ordinary people was his last refuge, and he became a kind of evangelist for it, converting Russia's liberals and revolutionary-minded intellectuals to his beliefs with missionary zeal. But the young people who heeded his call and flocked to the villages were soon bored teaching peasants.

Eventually, he turned his attention to the United States. “This people, young and enterprising, business-minded rather than educated, is so busy settling in that it does not know excruciating pain,” he wrote of Americans. “The figures that reflect the layers of this society are changing all the time. The stalwart English colonist type is spreading rapidly; should it prevail people will hardly become any happier, but more satisfied. The satisfaction will be duller, poorer and more sapless than that contemplated by romantic European ideals, but there will be no kings, no centralization, and possibly even no hunger.”

In 1852, Herzen moved to London where he established his Free Russian Press and published the famous Kolokol (Bell) newspaper. About the publication, Russia's revolutionary leader Vladimir Lenin wrote: “Herzen was the founder of the free Russian press abroad, which is his great achievement. Kolokol stood up relentlessly for the emancipation of peasants.”

Herzen as No. 1 dissident

Although there had been dissidents in Russia before Herzen, it was his convictions that shaped the Russian, and later Soviet, dissenter. There are five major differences between a dissident and an ordinary citizen. The first one is raw conscience. No dissident can enjoy life at the expense of other people’s suffering. Second, a dissident believes to the bitter end that good will save humanity. The third difference is a determination to act – dissidents must muster up the courage to step forward in front of a crowd. Quixotism is the fourth distinction. Russian dissidents rarely hope to succeed any time soon – they are always part of a narrow circle removed from ordinary people. Fifth, dissidents never resort to violence. Herzen meticulously observed this principle, condemning the Jacobin ambitions of Marxists. Herzen would most likely have been horrified to learn that the sound of his Kolokol eventually awoke Bolshevik-type revolutionaries.

Today, the number of dissidents in Russia probably numbers in the millions and there are far fewer restrictions on their activity. Nevertheless, the experience of the past dissident movements remains relevant to society. Just as before, the interests of the government are inconsistent with those of the people, and the majority of the people don’t really care. Herzen would say that therefore there is still a need for a “conscious minority.”

What would Herzen have said about the recent political events in Russia? Possibly, he would just repeat the words he wrote about his bitter disappointment with the results of the 1848 revolution in France: “The blind agitation among the people stems from hunger. Were a proletarian just a little better off, he would never even think of communism. Philistines are satisfied, their property is protected, and they have given up their concerns regarding freedom and independence. On the contrary, they even support a strong government, and they smile down on indignation at the news that a certain magazine has been seized and someone is being thrown into prison for his views. This annoys and exasperates a small group of eccentrics, while others pass listlessly by: they are preoccupied, they have their business to attend to; they have families. This does not really mean that we have no right to demand complete independence; this means there is nothing to be upset about if people are indifferent to our woes.”

This article was compiled from information provided by Ogonyok magazine and Radio Liberty.