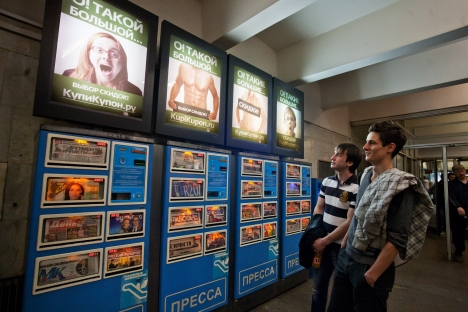 Texan Brian Konradi is part of the team behind one of Russia’s most successful e-commerce ventures: the local answer to Groupon.

Drawn by his Russian roots – his great-great-grandfather was a cabinet member under Tsar Nicholas II – and armed with a law degree from Georgetown University, Brian Konradi moved from Texas to Moscow in 2005 to work for law firm Akin Gump Strauss Hauer & Feld.  Although Konradi found his work as an American lawyer in Moscow challenging, he still nurtured a long-standing dream of becoming an entrepreneur.

While working in the Moscow offices of law firm DLA Piper, Konradi became acquainted with a group of investment bankers based in Tashkent, Uzbekistan. “I did a deal with them representing a Canadian client; they had great chemistry and leadership skills. I kind of kept in touch after that,” Konradi said of the men who would become his future employers.

The Uzbeks had heard of Groupon’s success in the United States, and in May 2010, “they decided this business model was right for Russia, hopped on a plane to Moscow and opened a daily deal site within weeks,” Konradi said. And the American wanted in on the action. Konradi joined KupiKupon in November 2011 in the triple role of General Counsel for Global Operations (the company now operates in seven former Soviet republics and Finland), Senior Vice President for Business Development and Director of the KupiPodarok division, launched this spring. He is the only non-native Russian speaker on the management team.

KupiKupon earned $400,000 in it first seven months of operation; revenues hit $40 million in 2011 and the business is predicted to take in $110 million this year.

“It’s no coincidence this business took off after the crisis hit,” said Konradi. “Whether in Chicago or Moscow, we in the daily deal business offered companies a chance to drive traffic with no out-of-pocket expenses at a time when marketing budgets were slashed.”

Russia became the biggest Internet market in Europe in November of last year, and, according to Konradi, KupiKupon is “at the forefront of converting a large base of Internet users into e-commerce users.”

“Over 45 percent of our shoppers are making an Internet purchase for the first time. We’re an engine for generating a class of e-shoppers,” he continued.

Konradi sees both opportunity and great responsibility in this position. “Any first-time Internet shopper who has a bad experience is unlikely to return for some time,” he said, explaining KupiKupon’s important social role. The company prides itself on having Russia’s best customer service department. “Try calling anytime and you’ll wait no more than four seconds,” Konradi said. “It’s cheaper for us to refund a client who was unhappy with a meal at a restaurant and retain his or her business for the future than try to attract a new customer altogether.”

In addition to the reluctance of some Russians to make purchases online, another challenge is Russians’ longtime distrust of credit and debit cards. In this country of 140 million people, there are only 11 million credit cards in circulation.

“Payment methods are a huge barrier to doing e-commerce in Russia,” Konradi said. “Most companies here have built their business on an old-fashioned C.O.D. (cash-on-delivery) model which carries a big risk if the
client decides not to buy a product after the company has spent a lot of money delivering it. Ozon.ru [Russia’s equivalent of Amazon.com] has a big problem with that.

“We insist all payments be made online,” he continued. “But we accept all forms of e-payment, including web money. I’m proud that our client base has one of the highest bank card usage rates in Russia. One of
he leading factors driving e-commerce is Russians’ changing mindset about the safety of electronic payment methods.”

Meanwhile, a war has broken out in Russia's e-commerce space. KupiKupon has a 20 percent market share and is doing battle with the incumbent, U.S. daily-deal giant Groupon, which entered the market after Russian businessman Yury Milner bought a 5.13 percent stake in the American company for a reported $75 million in spring 2010.

Milner owns Mail.ru, which is a giant on the Russian Internet, servicing about eight out of every 10 emails sent in Russia. The exclusive in-body email advertising that Groupon gets as part of this partnership has allowed the U.S. company to surge ahead in the Russian e-commerce marketplace. According to market rumors, however, this exclusive deal is due to expire in September, which will throw the field wide open.

"We don't need new money to get growth, but simply to keep ahead of the competition," said Djasur Djumaev, one of KupiKupon’s founders. "Currently, the three main players are all growing very fast, but we are eating into an untapped market. There is a ceiling on this non-competitive growth and there are about two years left until it is all gone. Then the only way to grow will be to eat into each other's market share and it will become really competitive."

Staying ahead of the curve

Konradi wants to beat the competition by diversifying KupiKupon’s business. “We’ve recently bought a St. Petersburg company whose service allows our clients to schedule lessons prior to purchasing them. This adds clarity to the purchase and allows the vendor to fill-up time slots for group lessons in, say, English,” Konradi explained.

In addition to Konradi’s own division, KupiPodarok, which acts as a third-party reseller of gift cards, KupiKupon has also launched platforms KupiOtpusk (literally “buy a vacation”) and KupiMart (consumer goods) all in the last year.

“The trend in the industry is really going in the direction of physical goods,” said Konradi. “You naturally run into the problem of quality control. That’s why we have sellers stock their merchandise at a special warehouse we recently set up. We know what the product is like and how many are in stock. Our goal is to become a diversified e-commerce group of companies operating on the whole of the post –Soviet territory.”

And with Russia’s Internet penetration expected to skyrocket further from the current 50 percent to over 80 percent by 2020, KupiKupon has every opportunity to expand at a phenomenal rate.