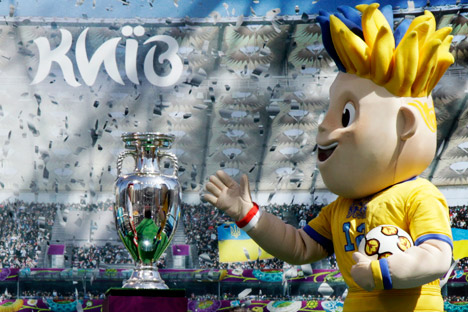 The 2012 European Football Championship in Poland and Ukraine is expected be a very special one for Russia. Source: AP

From June 8-July 1, the European Football Championship will take place in Poland and Ukraine. It is the first time that such a major tournament has been held in Eastern Europe.

While the performance of Soviet and Russian football teams has been mixed in world competition, they have historically had more success in European play. The Soviet team won the European championship in 1960 and took silver the three following years. Russia claimed the bronze medal in the last European championship four years ago. The team’s defeat of Holland 3:1 in the quarterfinals is still considered a highlight of Russia’s post-Soviet football history.

Now, Russia has confidently steered its way through the qualification stage for Euro 2012, placing first in its group. The team is coached by the experienced and illustrious Dutchman Dick Advocaat, who has many wins under his belt. The lineup is stable; the same players have formed the backbone of the team for many years. Additionally, Russia will benefit from the luck of the draw at Euro 2102 – it is playing in group A, which has fewer strong teams than the other groups.

In reality, however, the Russian team’s positives are also its negatives. Advocaat’s team has won the qualification stage, but it played only two significant games (against Ireland) during the entire stage. During the other games, the Russians were pragmatically picking up points, struggling to win the matches with such teams as Macedonia and Armenia. As a result, Russia’s position as first in its group says more about the weakness of the challengers rather than Russia’s strength.

A stable lineup is another black mark for Advocaat, who is highly reluctant to make changes. He mistrusts young players and bets on battle-tested warriors even if they are not in top form. As a result, the old guard has come to consider itself indispensable and is not playing its best game. For example, star player Andrei Arshavin has not scored while playing for the Russian national team in the last two-and-a-half years. And yet his place on the team is not questioned.

The results of the draw for Euro 2012, which put Poland, Russia, the Czech Republic and Greece in one group, were met with jubilation in all four countries, each thinking it was lucky with its rivals. “The draw was what the doctor would have prescribed. It would be called ideal if the group were moved to Ukraine, where I wanted to play very much,” said Arshavin.

And so the draw is not as simple as it seems when taking into consideration conditions both on and off the field. Greece was the European champion in 2004, and although it has had no spectacular wins since then, the team is obviously not a pushover. Poland is the host country, which makes it a dangerous rival, especially considering the delicate historical relations between the two countries. The same is true of the Czech Republic, which has had some scores to settle with Russia since 1968. Russia traditionally struggles playing against Slavic teams and the Czechs will send a young and promising team to Euro 2012.

As a result, analysts have been arguing that group A is actually the most difficult since all the members are of equal strength.

“We will try to win the championship. If you take part in a tournament, you will, in any case, try to win. This should be the mood. We will try to achieve the maximum. Russia is in the most difficult group, precisely because everybody says with one voice that it will be plain sailing for us,” said Advocaat, before leaving for the tournament.

The Russian Football Federation has given the Russian team a specific target: to make it out of the group. They have not made any requests about further prospects, since the two top teams from group A will play the teams from group B, which includes Germany, Holland, Portugal and Denmark. Getting past them and making it to the semi-finals would be another miracle for Russia, but then – nobody knows exactly when a miracle might happen.