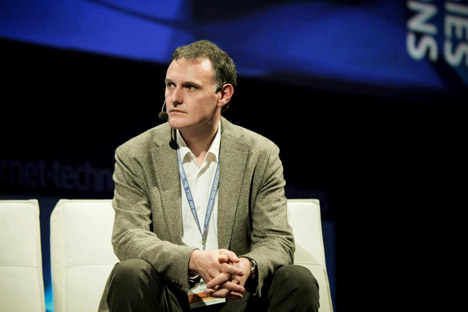 A pioneer among foreign investors on the Russian venture scene, David Waroquier of Mangrove Capital Partners is a recognized expert of the local Internet ecosystem and a reference partner for several Russia-based ventures. He shared with East-West Digital News his vision of the fast-growing Russian online retail market, its challenges, and the possible exit scenarios for investors in this industry.

This interview is an excerpt from an in-depth research paper on Russian e-commerce that will be released soon.

East-West Digital News: What makes Russian e-commerce attractive from your point of view as an investor?

David Waroquier: Russian e-commerce is still a relatively young industry, with penetration rates that are well below Western standards. The organic growth of the country represents a unique upside potential. Combine this with a growing middle class willing to spend, an Internet penetration that’s still about half that of Western economies, and an appetite for consumers in the regions to access deeper inventories of goods, which otherwise they could not easily buy locally, and you have an ideal mixture of driving forces to build massive e-commece companies in the country, if executed well.

EWDN: Have you noticed a change in foreign investors’ perceptions of Russia over the past few years?

D.W.: There is still a weak knowledge of Russia in general around the world.

But Russia, which had been neglected by international investors until only a couple of years ago, has started to arouse significant interest. Big projects like Rusnano and Skolkovo also make Russia’s modern face more visible. And of course major European and US venture capitalists who started investing early in Russia, like Mangrove, are paving the way for the others. Undoubtly, interest in Russia is increasing.

So, things are changing for the best. KupiVip.ru and Ozon.ru raised $55 million and $100 million, respectively, in 2011; more recently, Wikimart.ru secured $30 million, while Okotogo.ru in its last round, in March 2012, reached $10 million. Western investors and even Japanese investors were present in all these rounds.

Russia needs to show its success stories, to talk about people like Oskar Hartmann [the founder of KupiVip.ru]. Such founders should be the poster boys of the Russian economy.

EWDN: Compared to Western Internet markets, what are the main issues in Russian e-commerce?

D.W.: One obvious difficulty is fulfillment. Delivering across this huge country is like delivering across Europe and the US at same time. This is a real challenge in terms of infrastructure. Delivery providers do not work in fully satisfactory conditions, which has led leading players such as Ozon.ru and KupiVip.ru, our portfolio company, to progressively develop their own logistical capacities.

A problem here is that supply chain is a relatively new concept in Russia. Most Russian workers with experience in this field are working at large corporations, they are not trained to deal with the highly flexible conditions of fast growing e-commerce companies.

Lean e-commerce is also impacted by payment issues, and in particular the relative low usage of bank cards compared to Western standards. The bulk of e-commerce transactions happens using cash on delivery methods, which creates additional challenges in online retail. However, in certain segments such as online travel, credit card payments are more commonly used. Actually, the more you move to services, the higher the rate of bank card payments, and travel booking sites usually manage to raise payments by bank cards to over 50%.

The lack of qualified human resources in a fast-growing industry is also a major issue. Good COOs and CMOs are rare in Russia. Relatively high salaries and high employee turnover are mostly affecting Moscow. However, we do not see the same dynamic in other regions.

On a positive note, it is worth noting that Russia is building its first generation of e-commerce entrepreneurs and specialists. We believe in Russian entrepreneurs, who are hungry for success. Some of them are very bold, like Oskar Hartmann of KupiVip.ru or Maria Kolesnik of travel booking site Oktogo.ru, to name just two in the field of e-commerce.

EWDN: How do you envision exits in Russian online retail?

D.W.: We have no doubt that Russia is building several major e-commerce companies in various segments. Because of the nature of the Russian market, such companies have built well-performing and valuable assets which go beyond strictly e-commerce.  They are building excellence in superior consumer service, infrastructure, and distribution capacities. To reach profitability, they innovate in the way they approach consumers in this vast country.

Such assets are of high interest for some offline retail businesses in Russia, but they also increasingly wake up the interest of global non-Russian retail and e-commerce groups. There is also more interest nowadays to create liquidity in the form of public listings for those companies.

In the coming two years, we expect to see a few major exits happening in the e-commerce sphere.

David Waroquier is a partner at Mangrove Capital Partners.  David spends significant time in Eastern Europe to scout for the successes of tomorrow and to help Mangrove’s portfolio companies there. Back in 2006, David pioneered early-stage investment from Western VCs in Russia. His areas of interest revolve around consumer Internet and e-commerce while he tries to be involved with founders who are passionate about their business and whose personality traits combine creativity, humility, and ambition. David currently serves on the boards of Bestylish, KupiVIP, and Oktogo.