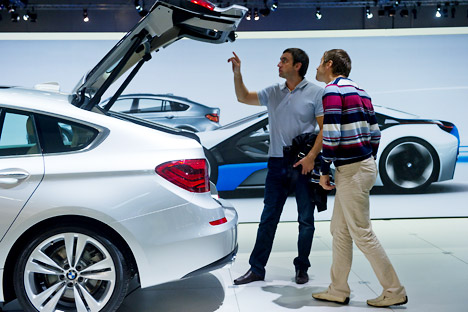 According to recent polls, the number of Russians willing to buy a car is growing. Source: RIA Novosti / Grigory Sysoev

According to a new report, the vast majority of Russians dream about buying a car, even when it doesn’t make sense.

Given the results of a new study published last week, the automotive industry has a bright future in Russia. According to the study, 19 percent of Russians who are going to buy a car in the near future are willing to spend on average $12,922. This is less than last year, when people were ready to spend $13,631, but more than in 2010, 2009 and 2006. Residents of Moscow and St. Petersburg are prepared to spend the most for a new car – $20,433. But residents of other major Russian cities are willing to fork out $16,325.

Not surprisingly, young people between the ages of 18 to 24 wanted to buy a car most of all. Thirty-one percent of respondents in this age group named it a priority – despite the fact that their financial stability is on average less than older respondents.

Experts have given many reasons to explain the car boom, particularly among younger and poorer Russians. Analysts say, in particular, that Russia is a big country and in remote regions, where unemployment is often high, owning a car offers the option of working as a taxi driver and at least bringing in a little income.

Additionally, even in cities, the Russian car market is not saturated. Despite its massive traffic jams, Moscow still has half the number of cars per capita of Western European or American metropolises.

"If in Moscow today for every 1,000 people there are just over 300 cars, in major Western European cities there are about 700" said Sergei Tselikov, director of the Autostat Analytic Agency, "It's another question whether our growth rate is expanding."

According to agency data, at the moment, the Russian domestic car market is successfully recovering from the 2008-2009 economic crisis: In 2009, the market dropped to 1.4 million vehicles a year; this year, it will rise to 2.7-2.8 million. At this rate, in 10 years, Russia will have about 400 cars per 1,000 inhabitants, while at the same time cars will become more affordable. For example, in 2001 a Lada Samara cost the equivalent of 38 monthly salaries, but in 2011 it was "only" 14 monthly salaries.

"GDP is growing, albeit slowly, but revenues are increasing. In addition, people have gotten used to moving around freely in private vehicles, and public transport has not been able to become a complete substitute for it" said Tselikov. "All this stimulates demand."

There are other explanations of the car boom that are more emotional than practical. In Russia,  ithe car still remains a status symbol. The importance of status above other considerations is signified by the fact that people are willing to sit in traffic jams for hours so as not to part with their cars, although this is often simply inefficient.

First published in the Ogoniok magazine. Read the original in Russian here.