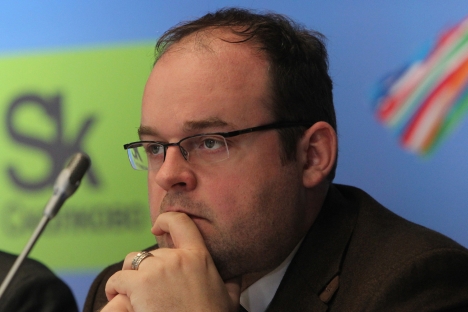 Vladimir Kanin founded Optiflame Solutions in 2008 with the profits from the sale of an I.T. start-up he founed in 2004. Source: PhotoXPress

In 2008, when the price of oil was hovering around $200 per barrel, few Russians were concerned about green energy. But Vladimir Kanin was the exception.

This month’s Russian-American Innovation Technology Week, which will be held in Philadelphia, Pa. and Boston, Ma., from June 14–21, will formally welcome Optiflame Solutions as the first Russian company to become a resident of America’s oldest and biggest city-based technopark, the University City Science Center. Located in Philadelphia, the technopark will celebrate its 50th anniversary next year. St. Petersburg–based Optiflame, which manufacturers devices to generate wind power, was founded in 2008 by Vladimir Kanin, a mathematician-turned–venture capitalist who wanted to create cheap, safe wind power for the world to use.

Growth must be green

“The technopark gives us an unprecedented opportunity to tap into American talent after passing through a rigorous acceptance process,” said Kanin.

After receiving a degree in math from Omsk State University in 1997, Kanin led a number of successful I.T. startups in Russia. One of his companies, Aero Solutions, which specialized in radio-frequency identification, was bought out by Systematica in 2007 for $2 million.

“In 2008, I was sitting on a pile of money we had earned from selling Aero Solutions,” said Kanin. “I wanted to invest it into some project rather than buy myself a new house or car. With fuel prices where they were, we were all worried about how the third world would pay for energy.”

“You can thank the iPhone and other modern phenomena,” Kanin continued, “but the third world has an exploding demand for energy.” The problem with meeting this demand via wind, nuclear, hydro or other power sources has to do with safety or price or both. “Most people don’t realize you can’t place wind turbines in populated areas, like on top of skyscrapers,” Kanin said. “There’s a famous video on YouTube about a bird that was killed on a wind farm. That’s saying nothing about children who could get hurt.”

Optiflame’s technology allows for the wind turbine to be encapsulated inside two aerodynamic cones which, the company claims, both increase wind efficiency and render the device safe to human contact. “When we originally came up with the idea, I traveled around the world to find out which of the major companies, like G.E. and Honeywell, were developing such a product and was shocked to find none,” recalled Kanin.

A grant from Russia’s Skolkovo Foundation allowed Optiflame to begin development of two models, which vary in price. “We’re setting up shop in Philadelphia because of the highdemand for green technology in the region — it’s one of the greenest cities in the U.S. — and to tap into the local labor market, which is awash in talented engineers and scientists,” said Kanin. “We’ll develop the technology at home, and then sell the production rights to someone who can build it cheaper and better. It’s Ricardo’s Theory of Comparative Advantage at work.”