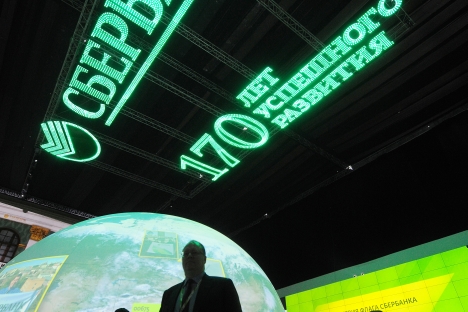 Once considered the dinosaur of Russia’s banking industry, today Sberbank is the market leader in nearly every available financial service.

Sberbank is the biggest lending institution in Russia, yet also has one of the lowest nonperforming loan ratios in the sector. Other Russian commercial banks complain that they struggle to compete with Sberbank’s speed of service and prices, and customers praise the efficiency of the local branches. This is not your babushka’s Sberbank; it seems like the Soviet dinosaur is in the midst of a revolution.

VTB takes over Bank of Moscow

Anton Karamzin, Sberbank’s deputy chairman, says that one of his bank’s advantages is a new data processing center that can leverage its huge volume of transactions, giving Sberbank one of the most accurate risk-assessment tools in the industry.

Buying high-tech solutions to deal with business issues is a pretty standard strategy, but Karamzin points out that the larger part of Sberbank’s success is the fundamental attractiveness of the banking business in Russia. The bank just has to manage this opportunity.

“The credit quality of the Russian consumer is one of the best in the world. Russian banks suffer from less fraud and bad loans than other European countries because Russians don’t like to load up on debt,” Karamzin said.

According to Karamzin, 20 years after the fall of the Soviet Union, Sberbank is in a position to take advantage of these quality consumers. “Sberbank is four years through a five-year strategic development plan, and we are now starting to see the results,” Karamzin said. “The plan covers every aspect of the bank’s life and we are doing this systematically, as we want to create a self- perpetuating system that will continue to function when the current management team eventually leaves.”

The goal is to make Sberbank as agile as a small bank, even though it is the second-largest bank in Europe after the U.K.’s HSBC in terms of assets and three times larger in terms of the number of branches. “If you measure Sberbank’s size in proportion to Russia’s G.D.P., then we are already by far the largest bank in the world,” Karamzin said.

The answer to the conundrum of how to run a huge institution as if it had the sensitivity and nimbleness of a small regional player is I.T. Moving money and managing risk is all about manipulating numbers, so banking is a business that lends itself to I.T. like no other. For the bank’s 170th birthday in November 2011, Sberbank launched the world’s eighth-largest data processing system at a cost of an astounding $1.2 billion.

The data processing center is the most expensive change the bank has made, but probably just as important in the long run is the upgrade of the bank’s operating system. In the 1990s, Sberbank had an 80 percent market share of deposits, but the start of banking reforms in 2004 saw that reduced to 46 percent as commercial banks ate into its business. However, in the last two years Sberbank has reversed the trend and is currently pushing at the 50 percent mark as it aggressively expands its product offerings.

Under former chairman Andrei Kazmin, the ultraconservative bank was very reluctant to get into the business of unsecured credit card lending. Current chairman German Gref finally launched credit cards in 2008, and in April this year the bank became the segment’s market leader with 18 percent of all credit cards in Russian wallets today. The story is the same in pretty much every banking product — mortgages, car loans, and credit for small and medium-sized enterprises.

“One out of every four people in the country banks with us. We are the financial system,” Karamzin said. “We have a system now where every step in the bad loan recovery process is recorded in the system together with the recovery plan schedule and deadlines. If, say, some deadline goes overdue by one day anywhere in any region, then it is immediately flagged in the system. We know here in Moscow, and can call down to the regional branch to ask what has gone wrong.”

The classic approach to turning a company in a new strategic direction is to focus on two or three strategic goals and push them through, but Sberbank is too big for that. “If we did it that way, the simple inertia of the bank would pull it back to its old habits. We have to do everything at once. We currently have 740 strategic projects running concurrently,” Karamzin said. “It’s like flying a plane and fixing the engines in mid-air. It takes military discipline to make it work.”

But the new system seems to be working. Under the old regime, the control mechanisms were repeated at every level — from the federal center to regional hubs, down to the subregional branches. Today the new system is fully integrated into a single national whole.

Karamzin adds that Russia is still at the beginning of developing its banking system: “Consumer loans grew by 40 percent last year, but penetration of banking services into the economy is still extremely low. The Russian banking sector can still grow many times over.”