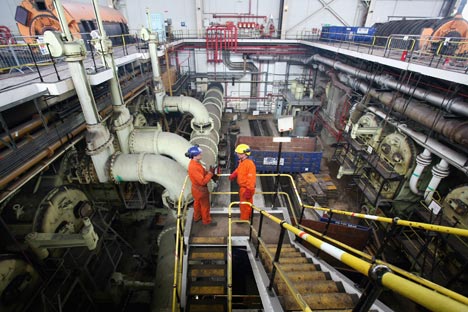 Rosatom, Russia’s state atomic energy corporation, is holding consultations over its possible involvement in the British nuclear program, according to Kirill Komarov, the deputy head of Rosatom responsible for development and international business. Komarov made the announcement on the sidelines of Atomexpo-2012, a nuclear power trade fair in Moscow, which was attended by more than 1,300 heads of companies and leading specialists from 53 countries.

“We are consulting with various stakeholders, but it is premature to talk of joining any current new build project,” said Komarov, according to Nuclear.Ru. Komarov noted that the UK government “has approved several sites as suitable for new nuclear build.”

The Russian exporters might encounter some difficulties in this rather narrow and competitive market segment, because the UK has its own licensing requirements for nuclear projects, which differ from the general European requirements. This means that, for the UK to adopt Russian technologies, Russia will have to have its project licensed according to British standards.

Yukka Laaksonen, vice-president of Rosatom’s international branch Rosatom Overseas announced at Atomexpo-2012 that the Rosatom corporation would apply to the British and U.S. supervisory agencies to have its VVER reactor technologies certified there. Laaksonen said that the Russians plan to complete standard Generic Design Assessment (GDA) procedures within five years, in order to obtain licenses for the construction of VVER reactors in the UK. Plans to apply to the U.S. Nuclear Regulatory Commission (NRC) for certification of the VVER reactor design will happen later, according to Nuclear.ru.

Even if Russia’s nuclear power plant in the UK is built many years down the road, or not at all, approval by the British and American regulatory authorities will help promote VVER reactor technologies in the overseas markets. Laaksonen did not elaborate as to which VVER design and model lineup Rosatom would endeavor to have certified in the UK and the United States, but his statement confirmed that the Russian state corporation and its subsidiaries are very serious about their plans to take part in the British nuclear program.

A few days later, Rosatom head Sergei Kiriyenko made more comments on the subject at a press conference in Astana. Kiriyenko confirmed Rosatom’s interest in the British energy market, specifically in Horizon Nuclear Power (HNP), which was originally established as a joint venture between Germany’s RWE and E.ON.

Horizon originally planned to build nuclear power plants in the UK with a combined capacity of 6,000 MWE by 2025; however, the two parent companies withdrew from the project (worth an estimated $23.78 billion) in March 2012 and announced plans to sell the joint venture, citing Germany’s intention to phase out its nuclear energy projects, high costs at Horizon and lengthy construction terms.

According to unofficial sources, Rosatom had been mulling over the possibility of buying into Horizon, and Kiriyenko confirmed this interest. “We are considering this possibility and we have serious partners. However, when we approach a new market, we have to be aware whether we will be helpful and efficient, whether they welcome us and whether we are ready for this work ourselves,” Kiriyenko said in Astana.

Currently, the chief contenders for Horizon are two consortia, both incorporating Chinese companies. The first includes China Guangdong Nuclear Power Holding Co. (CGNPC) and Toshiba Corp., and the second is led by State Nuclear Power Technology Corporation Ltd. (SNPTC). The deadline for bids set by the HNP owners is June 2012.

Rosatom has already been working in the British market for several years. It supplies nuclear fuel produced in association with France’s AREVA to the Sizewell nuclear power stations, and under another agreement, Russia supplies enriched uranium to the British market, where it is processed into nuclear fuel for local stations. Rosatom’s subsidiary Nukem Technologies has long provided nuclear facility decommissioning services in the UK. It is quite natural for Russia to wish to build upon the available experience and contacts to reach a whole new level of bilateral relations in the atomic energy sector, particularly at the company level. Last year, when a memorandum of understanding between Rosatom and the Rolls-Royce Group was signed in the presence of the Russian president and the British prime minister.

In their own words:

Russia is a world leader in nuclear power. Russia’s leading positions globally and the current economic backdrop – depleting resources of fossil fuels, climate change, population growth, increasing demand for electricity internationally – enable the Russian nuclear power sector to address the energy security issue effectively not only domestically but also in many other countries.

Someone may have the impression that Russia is only a supplier of natural resources to the world market. Everyone knows that Russia sells natural gas, oil, aluminum and other metals, while there are very few truly competitive Russian products on the global market. Nuclear energy is our chance to take another step in this direction and we are delighted that the country’s leaders share our vision of the priorities and understand that these efforts require support.

As of late 2011, we had 30 orders in our portfolio – 21 nuclear power units abroad and nine under construction in Russia. This is an unprecedented number that no other country can match, even China, which is always cited as an example of the most rapidly developing economy. Unlike Russia, they have two state atomic energy companies, but Russia’s sole company, Rosatom, is building power plants in China. These two Chinese companies are building 25 reactors, while we are building 30. We are the champions in terms of the number of projects and are well ahead of our peers from France and the United States. We have an excellent track record to present to our customers, this being more impressive than any words and promises.

Take the well-known American company – it has not built a single reactor in the U.S. in the last 20 years. So when they come to the Czech Republic, where we have also presented a bid, they are asked the reasonable question: “If you’re unwilling to build such a plant in the US, why do you want to build it here in the Czech Republic?” People are asking perfectly natural questions and we have a competitive edge here – we can provide a reference power unit, one that is operating successfully. In other words, we are not offering something that we do not build in Russia.