The price of a bailout? The right to lecture 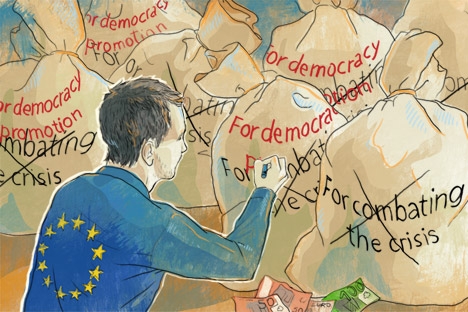 Despite its lack of funds, the EU still finds money for democracy promotion efforts outside its borders.

The European Union’s recent announcement of its plans to create a “foundation aimed at supporting societies suffering from authoritarian regimes” leaves little doubt as to the direction of the foundation’s resources.

“We expect the foundation to provide quick and effective aid to the EU’s nearest neighbors,” said Polish Foreign Minister Radoslaw Sikorski said. The spokesman of Poland’s Representative Office at the EU added that the money will benefit some “discreet civic initiatives.” In ordinary language, this means that we can expect opposition groups in Belarus, Ukraine and possibly even Russia and China to start getting financial aid from one more source. What is not clear is how this generosity towards the opponents of the aforementioned “authoritarian regimes” can be reconciled with the EU’s recent loans and even direct economic aid from these very regimes. Lest anyone forget, Russian President Vladimir Putin has pledged $10 billion to combat the Eurozone crisis and China has already provided even more.

It is interesting to note that the launch of this new foundation coincides with a financial crisis in the Eurozone that is considered to be the most acute in decades. The leaders of the EU countries are talking about huge bailouts for the indebted financial systems of Greece, Spain, Portugal, Italy and Cyprus. Obviously, these debts did not pile up in a day; they were somehow connected with the activities (or the lack of activities) of the EU’s bigwigs, many of whom were ministers and prime ministers in their respective countries during the “boom years” of 1990s and 2000s, when the debts actually piled up.

But, strangely, the EU’s press and diplomatic service treat these people a lot less critically than, for example, the presidents of Belarus and Ukraine. This – despite the fact that Minsk and Kiev did not waste huge loans, do not live at other countries’ expense and do not lecture other countries on democracy.

“We face a strange dichotomy in the so-called neighborhood policy of the European Union,” said Olga Potyomkina, head of the department of European Integration at the Institute of Europe of the Russian Academy of Sciences. “The worse the economic situation in the EU, the more it is inclined to tell other countries how they should live. It is very difficult to get a grant for scientific research, but people who claim they support ‘democratic change’ in neighboring sovereign countries always get a green light and lots of financial aid from the formally impoverished EU.”

For example, Portugal somehow was not criticized by the European press until the country had to be saved this spring with a $96 billion aid package, tied to severe budget cuts and limitation of that country’s financial and even political sovereignty. Belarus, which has the same population as Portugal (10 million people) satisfied itself with a $3 billion aid package from Russia, which provided this money via the Eurasian Economic Community, of which Belarus is a member. Unlike Portugal, Belarus survived its recent financial crisis not by getting loans from abroad, but by conducting a devaluation of its own currency. Belarusian ruble in 2011-2012 lost about 60 percent of its value. Portugal can’t do the same, since it is a part of the “zone of prosperity and stability” – the Eurozone.

“I would like to note that the easiest way to get EU funding for an NGO in, say, Ukraine is to write in your organization’s charter that you are going to ‘hold officials to account’ and that you plan to ‘fight impunity in the bodies of power,’ said Kirill Frolov, the head of the Ukrainian department at the Moscow-based Institute of the CIS Countries. “Meanwhile, obviously, the current crisis of the Eurozone wouldn’t have been possible without some impunity in the EU.”

Alexander Lukashenko, the president of Belarus, was criticized much more in the EU press than, say, European Commission head Jose Manuel Barroso, who served as Portugal’s prime minister in 2002-2004. Somehow, Portugal’s insolvency and the Eurozone’s looming collapse, which required financial aid from “authoritarian” China and Russia, trouble the European press a lot less than the misdeeds of Lukashenko. It should be noted that Lukashenko, who is rightly criticized in Russia and other neighboring countries for his handling of Belarusian opposition, somehow avoided the economic collapse that the EU officials have been predicting since he came to power in 1994.

The discrepancy between the EU’s economic performance and its desire to teach others has lead to some comic consequences. In 2011, Polish Prime Minister Donald Tusk presented a plan of “democratization” for Belarus, which suggested Belarusians receive $9 billion in loans from the EU, IMF and the World Bank, if they “conduct free elections” (i.e.: remove Lukashenko from power). Since the Eurozone’s troubles started to bite soon after the unveiling of Tusk’s plan, this generous “cash for democracy” offer was somehow never renewed. Lukashenko is still in power, and his country, despite all its difficulties, no longer asks for help – either from Russia or from the EU.

Dmitry Babich is a political analyst of the Voice of Russia radio station.

First published in  Voice of Russia.