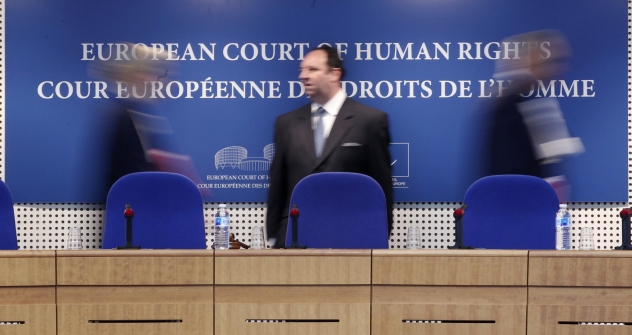 “While equality in TV coverage had not, in reality, been achieved during the 2003 elections the state did not fail to meet its obligation to ensure free elections,” said the ECHR judgement published on its website. Source: Reuters

Judgment in 2003 vote outrages Russia's opposition figures and encourages them to file another complaint against the alleged falsifications during the 2011 parliamentary elections.

The European Court of Human Rights (ECHR) has dismissed the complaint by the Communist Party of the Russian Federation (KPRF), the Yabloko party and several politicians and public figures allegeding unequal access to media coverage for candidates in the 2003 parliamentary elections. The ECHR ruled that the state did not fail to meet its obligation to ensure free elections, and that the opposition did have access to TV coverage. The initiators of the complaint insist that the ECHR judgment is politically motivated.

The ECHR judgment, posted on the court’s website, said: “While equality in TV coverage had not, in reality, been achieved during the 2003 elections <…> the state did not fail to meet its obligation to ensure free elections.” The ECHR judges ruled that unequal media coverage alone was not “sufficient to find that the elections were not ‘free’ within the meaning of the Convention.” Furthermore, the ECHR found that “laws and procedures existing at the given time guaranteed the opposition minimum access to TV and ensured neutrality of the state-controlled media.” The Court concluded that Russia had taken steps that guaranteed some visibility of opposition parties on Russian TV.

During the 2003 elections, the United Russia party won 37.7 percent of the vote, the KPRF, 12.6 percent; the Liberal-Democratic Party of Russia, 11.4 percent; and the Rodina bloc, 9 percent. The remaining parties fell short of the 5 percent then required to enter the State Duma. Yabloko took 4.3 percent of the vote and the Union of Right Forces (SPS), 3.9 percent. Following the elections, the opposition filed a claim with the Supreme Court seeking to have the result of the vote invalidated. The list of applicants included Yabloko and the KPRF, as well as individual claimants Sergei Ivanenko, Yevgeny Kiselev, Dmitry Muratov, Vladimir Ryzhkov, Irina Khakamada, Georgy Satarov, and Vadim Solovyev. They cited alleged violations during the 2003 election campaign, specifically unequal access for the candidates to TV coverage, ballot fraud and use of “locomotives” – prominent politicians and public figures who head party lists in order to garner support for the leading party and then give up their seats in favor of less reputable candidates after the elections. The Supreme Court dismissed the claim two months later. In 2005, the opposition filed a complaint with the ECHR.

The case was initiated by then-head of Committee-2008 Garry Kasparov. Vadim Solovyev, head of the KPRF’s legal service, said the applicants “virtually repeated everything they had referred to in their complaint submitted previously to the Supreme Court, but this time in the context of the European Convention on Human Rights.” They complained not only about the unequal media coverage but also the bias of the Supreme Court, which had dismissed their complaint. The applicants asked the ECHR to recognize violations of Article 3 of Protocol No. 1 (Right to Free Election) and of Article 13 (Right to an effective remedy) of the European Convention on Human Rights.

Lawyer Vadim Prokhorov, who prepared the opposition’s joint complaint to the ECHR, said that the applicants were trying to address the problem of elections in Russia “in a civilized manner and to rectify the defects in the election legislation; however, these court judgments drive the situation towards street democracy.”

“One thing is perfectly clear now – the European Court treats the situation regarding the ‘independent’ nature of the Russian media by analogy with the European media, whereas electronic media here depend entirely on the ruling party, which is what the ECHR failed to take into consideration,” said Prokhorov.

Solovyev described the ECHR judgment as a politically motivated decision. “Politics has finally reached the European Court,” said Solovyev. “Europe is faced with grave economic problems, and I suppose they hope to get our gas and oil. On the other hand, I assume that it is hard for a court to create a precedent that might affect other countries of the so-called new democracy, where election campaigns are at least as complicated as in Russia, specifically the former Soviet Union nations, such as Ukraine and Georgia.”

The opposition doesn't give up

Although ECHR dismissed the opposition's complaints about the 2003 elections, it hasn't prevented Russia's opposition parties - the Communist Party (KPRF) and Yabloko - from filing another complaint regarding the alleged falsifications during the 2011 parliamentary elections.

Opposition politician Vladimir Ryzhkov said virtually the same thing: “Although I normally tend to deny a political aspect of ECHR judgments, this one is obviously political. The case is almost a decade old and the judges must have reached an impasse – to invalidate the results of the vote, but what to do with the parliaments? It was Russia’s fifth Duma, but we have a new one working now. I have not seen the text yet but I expect the document includes recommendations for our legislators not to repeat the situation regarding unequal access to TV coverage.”