The Drought of Trust 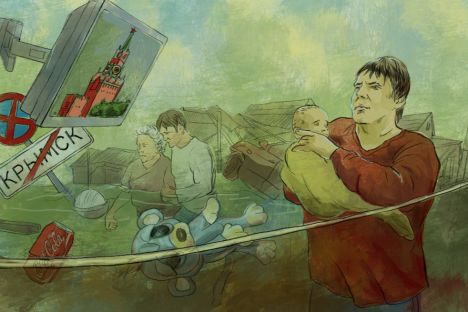 Maybe the government is not to blame for the recent floods in Krasnodar, but they certainly don’t deserve praise either.

However dissimilar various natural disasters might appear – be it an earthquake, hurricane, tsunami, forest fire or a flood – they all share a number of striking similarities. First, even if anticipated, a disaster strikes in such a way that it impacts people’s lives in the most damaging and disruptive fashion. Second, there is always a loss of control over situation by the authorities, the severity of this power vacuum varying from a simple inability to promptly launch a relief effort to the total chaos accompanied by looting and violent crime. Finally, no matter how fast or slow the consequences of the disaster are being liquidated, there is a general sense among the population of being abandoned by their government. And then, the blaming game inevitably begins.

Take, for example, the 2005 Hurricane Katrina, the costliest natural disaster in the history of the United States: it caused the deaths of more than 1,800 people and inflicted property damage to the tune of $81 billion. Although both the timing and location of Katrina’s landfall were known in advance, no one anticipated that the levee system in New Orleans, Louisiana, would fail under a sea wave and cause 80 percent of the city and surrounding parishes to be submerged for weeks. The government’s response to the hurricane was widely considered grossly inadequate, a sentiment exacerbated by constant public bickering between federal and local authorities over who was in charge. In particular, then-President George W. Bush became a popular target of criticism for his slow reaction to the crisis; it could be argued that the Katrina disaster inflicted such damage to Bush’s second term that his political reputation never recovered.

It will take a while to fully calculate the amount of destruction caused by the torrential flooding that struck the cities and towns of Russia’s Krasnodar Territory in the early hours of July 7. At least 172 people died, and this number will inevitably go up as the rescue operation continues. The cost of restoring roads, electric power systems and homes will obviously reach into the billions of rubles.

Video: Eyewitness Report on the flood in the Krasnodar Region

It will also take time to answer the perennial Russian question, “Who’s to blame?” Experts are largely unanimous in their opinion that what happened in the hardest-hit town of Krymsk (pop. 57,000) – when a 20-foot-high wave of water and mud from the mountains engulfed it in a matter of minutes – was a rare natural phenomenon that could not be prevented. But if the property loss could not have been avoided, the deaths of people could and should have been. It appears that the local authorities knew at least three hours in advance that a flood would hit Krymsk; yet, they did very little to alarm sleeping people about the incoming danger. Moreover, no attempts were made to organize the evacuation of the most vulnerable among the population: children, the elderly and the disabled.

The Krymsk tragedy leaves a more bitter taste because the town suffered a similar flash flood in 2002, causing about 100 deaths. It now appears that the regional authorities did nothing since that time to prevent future disasters, either by upgrading dilapidated irrigation systems or by establishing efficient communication channels. No wonder that the opposition in the State Duma is calling for the head of the Krasnodar governor Alexander Tkachev. However ill-timed, the call holds certain merits.

Additionally, the tragedy highlighted the lack of trust between residents and the authorities. Shortly after the flood, the prevailing public opinion in Krymsk was that the disaster was actually “man-made:” rumors began circulating that in order to save the all-important port city of Novorossiysk, the authorities “sacrificed” Krymsk by releasing excess water from a nearby reservoir. Many in Krymsk keep believing in this scenario despite abundant evidence to the contrary.

The Krasnodar flooding came at a precarious time for Russian President Vladimir Putin. Public opinion polls show that his once sky-high ratings are on a decline, which suggests a growing public mistrust in his ability to govern the country in the role of undisputed national leader. So far, no one has directly blamed Putin for what happened; yet his critics immediately pointed out that the day of mourning for the victims of the flood that Putin announced on July 9 was 16th such mourning day since he assumed power in 2000.

For his part, Putin seems to have done everything expected of him: he immediately visited the disaster region and promptly promised state funding for the recovery. But he could do more. As Russians of all political preferences have united in their efforts to help the victims of the flood – by sending food, goods, medicine and by volunteering on the spot – Putin could use this opportunity to begin a nationwide dialog with the society, including his fierce critics, on the problems facing the country. Of course, no dialog will stop a future flood from happening; but it might prevent a drought of trust.