Playing for a new homeland 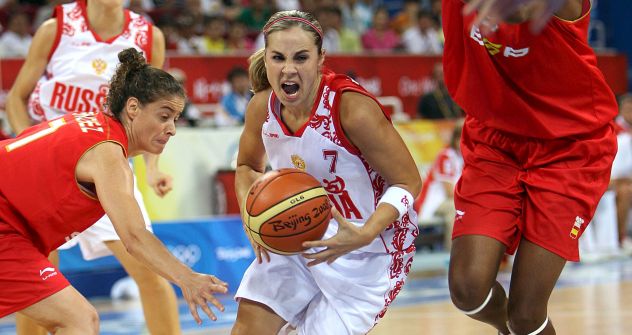 The number of naturalized athletes in the Russian Olympic team continues to grow: in Beijing there were four, but in London, there will be 14.

Russia is providing citizenship and a place on the national team to an increasing number of talented foreign athletes. During the Olympic Games in Beijing, four naturalized athletes competed for Russia; in London, that number will rise to 14.

The coaches of the U.S. Olympic basketball team paid no attention to Rebecca Hammon until she moved to Russia. Despite the fact that she had been a leading light in the WNBA (Women’s National Basketball Association) and a regular fixture in the league’s All-Star Game, no one was in a hurry to call her up for Team USA. The 31-year-old did not play a single official game for the national squad.

Hammon signed a contract to play for CSKA Moscow shortly before the Beijing Olympics and despite the fact that the usual procedure for registration of citizenship in Russia can take up to five years, in Hammon’s case, it required less than one: the club’s management was able to convince the Russian president of Hammon’s exceptional abilities. Vladimir Putin, who had recently awarded the title of “Honored Master of Sport of Russia” to U.S.-born basketball player John Robert Holden, a member of Russia’s winning team at EuroBasket 2007, could not refuse.

“It never entered my head that I would ever play for Russia,” said Hammon. “It was all so spontaneous. When I played for CSKA Moscow, the club offered me a Russian passport and a chance to play for the national team at the Olympics. It is a great opportunity for me to get more international game time, whether it's the Olympics or the world championships.”

Back home, the reaction to the news was hostile. Some TV stations devoted days of coverage to the “unpatriotic American,” who switched allegiance at a crucial moment to a sworn rival.

“Many people I know in the States thought I’d lost the plot,” said Hammon. “I talked it over with my parents, and knew that after my departure the attention would turn to them: The parents who raised a traitor. For me, it was a very important step, and our performance dispelled all my doubts. To win an Olympic medal is all that counts, and in spite of all the trials and tribulations, my decision to play in Beijing was the right one, and I am very happy with my bronze medal.”

On court for the Russian national team, which for many years had done without a top-class point guard, Hammon was in her element. At the 2008 Olympics, EuroBasket 2009, and the 2010 World Cup, the coaches built the team around her abilities.

"My job is not only to score points and win games, although that’s a lot of fun,” Hammon said. “My job is also to set an example to millions of fans, especially women and girls, who support the national team.”

She still feels connected to the United States and spent last year shuttling between Orenburg and San Antonio.

“The States is my home, so obviously I want to be where my family is and where I grew up,” she said. “But I'm quite comfortable in both countries. But at the end of the day, when fatigue is setting in, I catch myself thinking that I’d like to be in America.”

Hammon says she gets along very well with all her teammates on the Russian national squad.

“I’ve always been lucky. At first I wasn’t taken seriously in school, then at college, now in the national team — I'm used to it,” Hammon said, with a smile. “In the team I’m friends with Ilona Korstin and Katya Lisina. In general, I get on great with all the girls. They all speak English, so I can share my professional secrets with them.”

Hammon has high hopes for the Russian team in London.

“We need to do better than in Beijing,” she said. “Reaching the final would mean that we’re heading in the right direction. We have a great team fully capable of progressing through all stages of the tournament. Russia occupies a special place in my heart. I’ve got many friends and acquaintances here who support and love me. I’ll do everything I can to add a medal to the Team Russia’s trophy cabinet.”

It is quite possible that Russia could cross paths with the United States, which is considered one of the tournament favorites. However, Russia’s American point guard is optimistic:

“If we play the USA, I’ll give all my energy and emotions to secure victory for Russia,” Hammon said. “I’m here now, and I never look back and regret I’m not wearing the U.S. vest.”

Alex Bogomolov, another member of Russia's Olympic team, who was born in the U.S. Source: RIA Novosti / Alexei Danishev

For another member of the Russian Olympic team with an American passport, tennis player Alex Bogomolov, going for the gold for Team Russia runs in the family. His grandfather, Yury Predeha, coached the handball team to Olympic victory, and his father, also Alex Bogomolov, was a successful Soviet tennis player and later coach of Olympic champion Yevgeny Kafelnikov.

The elder Bogomolov went to Miami on a contract, taking his family with him. Later he returned to Russia, but his wife and children remained in the United States. When the younger Bogomolov was 15, he beat Andy Roddick to win the U.S. Junior Championship.

At 21, Alex married, and two years later divorced, a future Playboy star and one-time promising tennis player named Ashley Harkleroad. His failed marriage caused him to lose his focus on tennis. He appeared in the press not for his victories on the court, but because of a doping scandal and his victory in tennis’s “Battle of the Sexes.” However, when Bogomolov’s personal life calmed down – today he is engaged to a Brazilian woman named Luana, with who he has a son – his interest in tennis returned and his ranking began to rise.

“Luana, my wife, had no idea about tennis before we met,” said Bogomolov. “And then she became a real tennis aficionado. She fell in love with it, not just the way I play, but the sport itself. She could stand by the side of the court for six hours. She studies how the ratings are calculated, knows all my stats for different opponents, always tells me what surface I’ll be playing on next and the preferred style my opponent.”

Last summer, there was no hint that Bogomolov might change his national allegiance; he had played for the United States his whole career, and he had finished the previous season a respectable 33rd, chalking up a string of sensational victories in major tournaments along the way. But by the end of the 2011 season, an agreement had been reached to allow Bogomolov to play on the world tour and in Davis Cup matches as a Russian. Bogomolov had to pay the United States Tennis Association $75,000 in compensation for its investment in him during his years on the junior tour.

“That matter has been resolved,” Bogomolov said. “To be honest, I think the Americans’ demands were just. They did invest in me at some stage, so I don’t see anything shameful about compensating them for it.”

Bogomolov’s case is an exception in the world of tennis, where talented Russians often end up playing for the United States.

"I am 29 years old, and the door to the Davis Cup is closed to me in the U.S. team, let alone the Olympics,” Bogomolov said. “My dad was desperate for me to play at the Olympic Games at least once. Now I can realize his dream.”

Despite Russia’s total of just three Olympic medals in men's tennis, Bogomolov is bullish about the team’s chances.

“I recently learned that not only my grandfather, who was a handball player, but also my great-grandmother on my mother's side in her day was also an Olympic competitor,” Bogomolov said. “She was a track-and-field athlete. It turns out that I'm the third Olympian in our family, so motivation is not a problem. It’s a bad soldier who doesn’t aspire to become a general. Olympic gold is anyone’s for the taking. I’m no exception. Watch me pull out all the stops.”