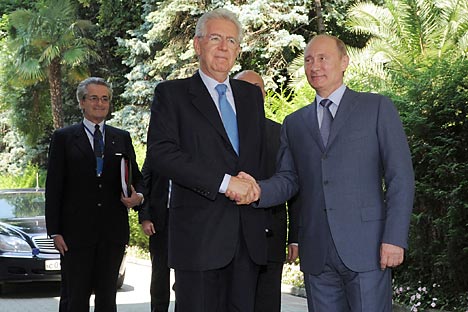 At a meeting with the Italian prime minister in Moscow, Russian President Vladimir Putin reaffirmed his stance than any the way forward in Syria lies through the Security Council and negotiation.

After a meeting on July 23 with Italian Prime Minister Mario Monti, Russian President Vladimir Putin made new statements proposing a way forward in Syria. Putin believes that the United Nations Security Council must remain the main agency for resolving the conflict. He noted that the Security Council’s decision to extend the international observer mission in Syria attested to the ongoing belief that the Syrian conflict can be resolved within this format. “The agreement to extend the UN mission, in spite of some differences, shows that it is possible to agree with all the countries, within the UN framework, for the common good and for the good of the Syrian people. We will go on working with our partners,” Putin said.

The Russian president listed the measures needed, in his opinion, to put an end to violence in the Middle Easter state. “The action plan should be as follows: a ceasefire and an end to violence on both sides, negotiations, a search for a solution, determination of the constitutional framework for the future state, followed by structural changes. A reverse order would bring chaos,” Putin said.

Putin is sure that the only way for Syria to move forward is for representatives of the government and the opposition to sit down at the negotiating table. “We do not want the situation to develop into a civil war and last indefinitely like in Afghanistan,” Putin said. “We want to see peace and we want all the citizens of the state to agree and find variants acceptable to all for participation in the country’s leadership and for ensuring the security of various religious groups.” Putin stressed that, if the Syrian leadership and President Bashar Assad were toppled by unconstitutional means, they would swap places with the opposition and an endless civil war would continue.

For his part, Monti said that the best way out of the situation would be creation of an interim government, as happened in Lebanon. The Italian prime minister said that his country understood Russia’s caution in discussing the Syrian problem, because the UN might invoke Chapter 7 of its charter, which would allow sanctions.

“But one has to bear in mind the risk that, if the UN fails to pass a timely resolution on Syria, the situation might get out of control. We think the most rational option is to form a transitional government, like in Lebanon, but such a decision cannot be adopted without Russia’s support,” Monti said.

On July 19, Russia and China vetoed another draft UN Security Council resolution on ending the conflict in Syria.

Fighting between the authorities and the opposition has been going on in Syria since March 2011. The opposition demands that President Bashar Assad resign and has accused government forces of atrocities against civilians. Official Damascus claims that “bands of armed terrorists” supported by foreign radical Islamist groups are running rampant in the country under the cover of democratic slogans. The armed confrontation has claimed between 12,000 and 17,000 lives.

The Western countries have taken an openly anti-Assad stance: official representatives of France, Britain and the U.S. have repeatedly declared that the Syrian President must go and an interim government must be formed in the country. Most recently, the Arab League also called on President Assad of Syria to resign and hand over power to a provisional government. The Arab League foreign ministers are united in thinking that this measure could stop the fighting in the republic.