An animator who draws a fine line between man and beast 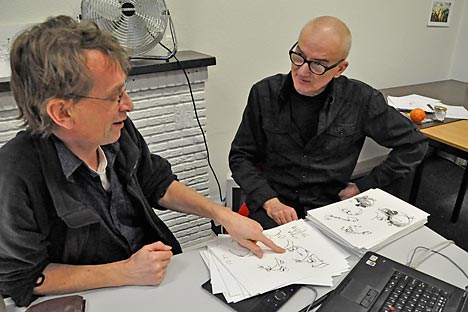 Igor Kovalyov is well known to Americans from "The Rugrats Movie," but his cutting edge shorts explore what it means to be human.

A lumpy blue man wearing a striped jacket attempts to clean his teeth, only to find himself and his whole flat engulfed by the paste, which, as the viewer discovers through a languid shift of angle, originates from his pet slug rather than a tube.

Such is the bizarre world created by Igor Kovalyov in the animated short, “Hen his Wife,” which tells the story of a man’s mental breakdown after he discovers that his wife is not who she appeared to be.

Russian animation in search of a hero

Kovalyov was a founder-member of the first independent film studio in Russia, Pilot, and he remains a significant figure in late and post-soviet animation, not least because he has made the transition from east to west, with commercial success as well as cult status.

At least one generation of youngsters are deeply familiar with his Hollywood venture, “The Rugrats Movie,” which was the 10th most successful animated film of the 1990s, grossing over $100 million. Kovalyov himself shrugs this off, saying “the main reason why I directed the Rugrats movie is I wanted to earn money for my own project.”

Kovalyov says that it was “hard to bring something of myself into Rugrats,” and more of his trademark style can be found in another successful 90’s Nickelodeon show, “Aaahh!!! Real Monsters.” This follows a group of young monsters as they learn how to scare humans, with their many failures teaching them what it means to be a monster.

Such existential concerns certainly echo Kovalyov’s independent work, critically acclaimed short films such as “Andrei Svislotsky,” “The Flying Nansen,”  “Bird in the Window” and “Milch.” These can be challenging works and their mystery is enhanced by Kovalyov’s somewhat elusive nature. He rarely does interviews, and when he does, they are peppered with enigmatic statements about his thought-process.

In an interview with “Izvestia” in 2005, he likened himself to “a child who has found their favorite toy and will not part with it” and he described “the creative process as a game.”  In a recent interview with Cinematheque he went to the other extreme, stating that “we perceive everything as philosophy.”

Part of Kovalyov’s appeal is the way he combines such elements, offering the casual viewer playful visual imagery and humor, while exhibiting technical brilliance and a philosophical depth that encourages experts to keep returning to his work.

Leading critic and friend Mikhail Gurevich said that “my experience clearly shows me that upon re-reading, re-watching, reviewing, [his works] seem much simpler, gentler, more straightforward, and much more real in a sense than surreal, than at the first encounter.”

Gurevich went on to say that “it took me some years to finally come to terms with regard to “Hen his Wife” and understand that it’s pretty soft and touchy and warm and innocent and in a sense straightforward. Like much of his work it is ultimately an intimate story of unhappy people, marriages, and relationships.”

Gurevich told RBTH that trying to interpret Kovalyov too deeply is “not to his taste,” but admits that his short films offer plenty for those who seek meaning. Indeed, one of the defining features of Kovalyov’s animations is their density. His works are packed with so many symbolic, or for Gurevich “potentially” symbolic moments that the viewer will not want to look away for an instant.

Kovalyov uses devices such as subtle time distortion, which emphasize certain events and force the viewers to make their own decisions about the meaning of what they have seen. At the beginning of “Andrei Svislotsky,” a hairbrush seems to float upwards into the man’s waiting hand, and his bed sheet floats down onto him slower than expected. Later a butler appears to linger over licking a letter, which makes the action seem almost affectionate. 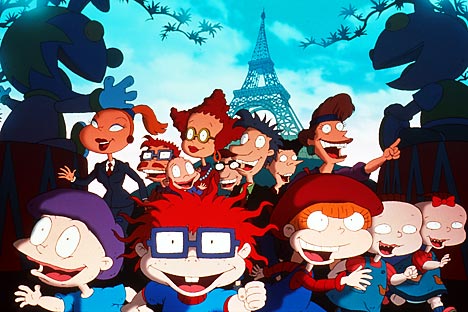 “The Rugrats Movie”  was the 10th most successful animated film of the 1990s. Source: AFP / East News

Gurevich explains that such effects are a result of the animator’s innovative and experimental style. He says that Kovalyov is “very sharp in his movies in terms of montage and how he combines and constructs movements. His animation is hand-made; it’s constructed movement, a constructed timeline. In this sense he gives us a syncopated, or the illusion of, syncopated movement.”

Such innovation may be lost on the average viewer, who can still appreciate the rough lines and seemingly fluid animation that allow Kovalyov to explore the boundary between the characters and their world. His characters sometimes seem to fade in and out of their background. With physical norms thus challenged, the viewer is left to question norms of identity, both their own and that of the characters.

Kovalyov’s alternate realities are often disarmingly tranquil, as he presents characters comfortable in their environment, over-confident even. He then creates a story, which cause them to reconsider what they take for granted. Kovalyov uses sound to heighten this effect, and his films are punctuated by songs and noise that suddenlyinterrupt the narrative. Kovalyov’s characters are often seen covering their ears, as they attempt to shut out the invasion of the outside world.

The resistance to such interruptions is oftena precursor to deterioration in the mental state of his characters, whofrequently regress to nakedness in times of crisis. The relationship between humans and animalsis a recurring theme throughout Kovalyov’s work, with animals often resembling humans and vice versa. The nakedness of his characters, their bestial appearance, and their odd behavior serves to eliminate theboundarybetween man and beast, as Kovalyov explores the delicate construct that is human identity.

Kovalyov’s works are largely wordless, which allows the viewer even greater freedom to respond emotionally and philosophically to the themes he explores. For example, there are few clues in “The Flying Nansen” as to why a stranger jumps into another’s arms and starts passionately kissing him.

Perhaps, when combined with the hallucinatory appearance of a woman that follows, it can be seen an exploration of sexuality. Or perhaps we should just take Mikhail Gurevich’s hint: “He’s a very witty guy who loves practical jokes.

Whatever path we follow in responding to his work, Kovalyov’s films defy easy interpretation and that is part of their allure. They transcend cultural boundaries and cause us to question exactly what human existence means to us, without limiting themselves to one specific answer.