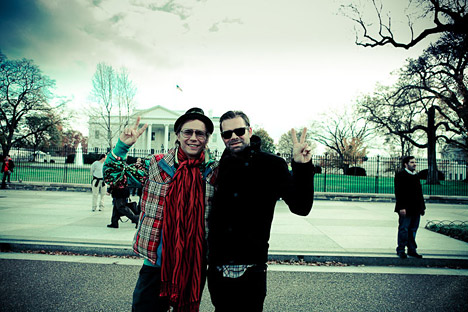 Russian band Mumiy Troll, led by charismatic headliner Ilya Lagutenko, is pushing for an English-speaking audience after more than two decades of rock stardom in Russia.

The group just released its first album in English. "Vladivostok" was recorded in Los Angeles with heavy-hitting producers Joe Chiccarelli, Greg Brimson and Mike Clink. The band's first North American release, "Comrade Ambassador," was released in 2009, and including an inspired rendition of the song "California Dreaming" in Russian. Once called the "one of the most socially dangerous bands in the world," Mumiy Troll just completed its U.S. tour, including a stop at the The Highline Ballroom in New York.

The group has now embarked on a round-the-world tour aboard what was once the largest sail boat in the world, the “Sedov.” During the voyage, the band will stop for concerts and meet with fans while also recording a new album, this time in Russian. Culture correspondent Xenia Grubstein spoke with Ilya Lagutenko during the band's U.S. tour.

RBTH: Why did you decide to record a new album on a 14-month tour on a sailboat?

Ilya Lagutenko: While sailing around the world, I’m hoping to get unusual influences and impressions that I could hardly have gotten from a "normal" tourist experience. When I was a child, I wanted to be a seaman more than a rock star. Funny enough, becoming a rock star turned out to be easier for me but I still cherish my fantasy and want to realize my second dream just as much.

I.L.: I always compare my band to wandering albatrosses, who can follow the ship for thousands miles, but still are able to find the way back home to feed and breed.

RBTH: Last time I saw you before your New York show, was in Moscow at Afisha Picnic in 2010. What have you been doing since?

I.L.: Same thing we've been doing for the last 15 years. Making music, performing, touring, trying to reach new horizons. Our first album in English that came out in April is a precious experience. For me it's a logical continuation of what we've been doing before. I think, everyone who ever dared to be in a rock band is aiming to conquer the world through rock-n-roll, not just to sing for his friends or family. I wasn't an exception. Since I was a teenager, I wanted to see the world, London, Paris and Pamir, playing my own music. Eventually it turned out to be not that easy, but, on the other hand, not that hard, either. By the way, this year is our 15th jubilee [from the first tour].

RBTH: "Vladivostok" was recorded with prominent U.S. music producers such as Mike Clink (Guns & Roses, Metallica, Megadeath), Joe Chiccarelli (Strokes, My Morning Jacket, Tori Amos, Killers) and Greg Brimson. What was it like working with them?

I.L.: As a matter of fact, it was harder than just “pay, and they are all yours.” To begin with, we were recording tracks in English for a while…

I.L.: Yes, but I think we weren't ready for a whole album in English yet. I think this fruit just needed more time than our albums in Russian. As for American producers, after working with them I realized that a producer's task is to be your second head. It was a very interesting and enriching experience. ...It doesn’t matter, where the recording equipment is, in New York or Moscow. A good producer helps you to understand what you want, at the same time boosting your confidence.

RBTH: Where do you spend most of your time now? Vladivostok? Moscow? London? Los Angeles?

I.L.: Honestly, on the road. Unfortunately for my family now – a few years ago I'd say luckily – I do spend a lot of time traveling.  I don't think I will slow down any time soon. This is the life of a performing artist, it's a requirement. It's not easy, but I still have enough energy and ambition to keep doing it. But of course, this is very tiresome, both, physically and mentally.

RBTH: You do tour a lot, even in China and Mexico, exotic venues for Russian musicians!

I.L.: Even in Greenland! Not many bands have been in Greenland, to begin with. The locals told me that Slade performed there in 70s, and then Blur was going to come, but never made it. So we were the second band ever to perform in Nuuk, Greenland's capital.

RBTH: How many people live in Nuuk?

I.L.: About 10,000 people, mostly whalers. (laughs). I call it «music tourism», because those are places I would never travel to on my own, but when touring, I have a perfect reason. That's how I'm learning about the world...because people's reactions to our songs vary. It's like backpacking, but you get to sing on the way.

RBTH:  What about China? I have the impression that China is so big that after touring there once a musician can live off of it forever.

I.L.: Theoretically yes. My theory is, that in the 1970-80s China was so closed from all external influences that rock music simply didn't penetrate the country. Therefore, there is not much appreciation for rock music. When the country was opening, little by little, its citizens gravitated more towards Taiwan and Hong Kong and their pop music. That's why [an unusually small crowd] gathered for the Rolling Stones in China, consisting purely of foreigners living in China. So for me touring in China is more music diplomacy.

RBTH: When were you last in Vladivostok?

I.L.: I go there frequently, usually for concerts and other cultural events. I'm really inspired by the changes the city is undergoing, the new bridge to Russky Island, the new Far East University, new visa-free airport etc. I feel like the futuristic plans I heard of as a schoolchild are finally coming true. Knowing personally many political leaders in the region, I want to believe that at last these people will think about the future of the region, and care for the youth that lives there. I think that Vladivostok now is probably one of the most convenient places in the country to do something new. This will give hope to people and bring investments to the city. Vladivostok is a unique place, ask anyone who has been there. It is rough, but roughness can be attractive, too.

RBTH: I know that you are obsessed with an idea of making an album of lullabies...

I.L.: I am, I think it's a very interesting project. But I can't find the time to finish it. We just released two albums, now we are working on another. I'm also finalizing my Tigerbook. It’s a series of three books in which I talk about tigers to children, teenagers and adults.

RBTH: Working abroad, do you have a key phrase to describe Russia? «Russia is...»

I.L.: I really would like Russia to be like Mumiy Troll songs: beautiful, a bit enigmatic, sometimes joyful, sometimes melancholy. I would really like all of Russia to be this way, but even Russian music is different. So I would like foreigners to at least begin discovering Russia through good examples, like our music [he chuckles].