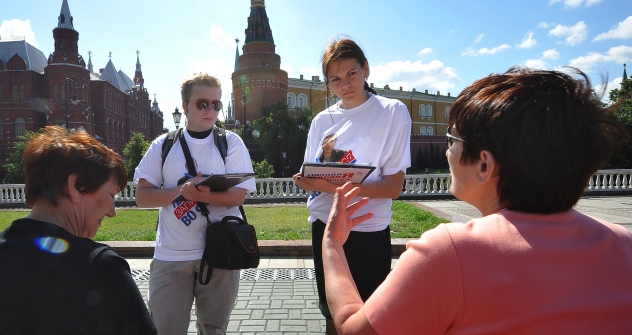 Surveys show that the majority of the population approve of tighter controls on speech in the name of security.

Although the press has made much of recent bills passed by the Russian State Duma to restrict the activities of non-governmental organizations, among others, a recent poll by the Levada Analytical Center shows that the new legislation has the support of the majority of Russians.

According to the Levada Center survey, Russians approve of the controversial initiatives recently proposed by the government and are willing to embrace tighter regulations for the sake of better security. Fifty-eight percent of respondents approved of the recent re-criminalization of libel, while only 20 percent disapprove. Sixty-two percent of those polled agreed with the new law creating a list of banned websites, compared with 16 percent opposed. Finally, 45 percent of those surveyed supports the bill that requires foreign-sponsored non-profit organizations to register as foreign agents, compared with 18 percent who disapprove of this initiative. That said, many respondents declined to respond to the poll questions at all – 37 percent failed to answer the question concerning non-profit organizations and 22 percent left blank the questions about libel and tighter Internet control.

Yuri Djibladze, head of the Center for the Development of Democracy and Human Rights, believes these results indicate that Russians have “a vague idea about what’s going on.” He adds that the nation does not grasp “the consequences of the application of these laws” due to a lack of information. For example, 36 percent of those polled by the Levada Center believe that the libel has been re-introduced to the Criminal Code “in order to better protect the rights of defamed citizens.” Another 22 percent think the initiative intends “to protect officials from unfounded accusations,” while 27 percent see the bill as an attempt “to safeguard the representatives of authority from criticism coming from the society.” According to 52 percent of those polled, the law on the black list of websites has been drafted “in order to prevent the spread of child pornography and encouragement of suicide.”

Alexei Chesnakov, deputy secretary of the General Council Office of United Russia, said that responses show that the nation understands “the authorities have made an appropriate step by proposing to regulate areas that arouse concern of the society. There is obvious demand for order among the Russian citizens. This is why people approve of the laws that will contribute to sensible regulation of certain activities,” Chesnakov said.

Not everyone is put off by a possibility that the new laws may be used to promote censorship. However, 44 percent of respondents agree (while 43 percent disagree) that restoration of the Criminal Code’s defamation article may restrict freedom of speech. Furthermore, 34 percent of those polled believe that creation of an Internet blacklist may inhibit freedom of speech whereas 51 percent disagree with this view. Alexey Grazhdankin, deputy director of the Levada Center, said in response “only a small share of the society” has an interest in the freedom of speech while most people think freedom is “somewhat dangerous” since not everyone can handle it “correctly.” “Therefore, the majority believes that the state is doing a service to the society by curtailing freedom.”

Maria Lipman, an expert at the Moscow Carnegie Center, attributes the poll results to the fact that “paternalism and dependency” sentiments dominate Russian society. When polled on the relationship framework between the state and its citizens, 82 percent answered that the state needs to take better care of people. A further 5 percent believe that citizens “need to agree to certain sacrifices for the good of the state,” while 12 percent say that “people need to act on their own initiative and take care of themselves.” A mere 20 percent of the nation presume that “the majority can survive without state patronage,” whereas 75 percent disagree with this statement. The poll was carried out on July 20 – 23 among 1,600 respondents.

“The conviction that the state is supposed to dominate the society is typically Russian. It’s a belief that the state is omnipotent while we’re powerless,” Lipman said. According to Djibladze, active people who realize that the relationship between the society and the authorities needs to change in order to give the people an opportunity to “make decisions and be in control” constitute from 10 to 20 percent of the population. “Although we embraced certain democratic elements in the 90s, we don’t really have experience of functioning democratic institutions,” he said.

Lipman admits that Russian citizens realize “how great the misuse of authority is, but there’s general consensus that the state needs to have substantial regulating functions at its disposal.”

This article was first published in Russian in Kommersant Daily.