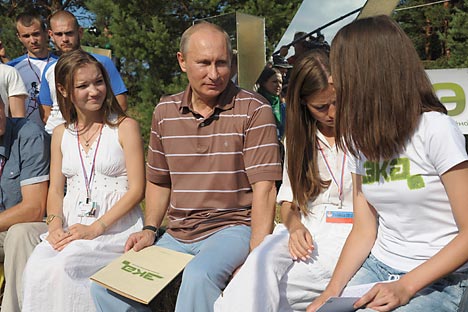 On the last day of the annual Seliger camp for young political activists, President Vladimir Putin took the stage to answer questions about Russia’s political traditions and beer.

Russian President Vladimir Putin flew in by helicopter to address the final session of the 2012 Seliger youth forum, which was dedicated to politics and civil society. Seliger has been known as the summer gathering of the pro-Kremlin youth group Nashi, but this year the meeting brought together representatives of opposition youth movements as well.

For the meeting with Putin, the entire camp gathered in the main tent and Cossack guards cordoned off the venue, preventing anyone from entering or exiting. Putin entered the tent to a standing ovation.

Photo of the day: Putin arrives in the Seliger camp

Dmitry Ternovsky, who moderated the session, told the president that today Seliger is a new place where people of different political views can have a real discussion. “The authorities are used to walking on safe spots, where no pointed questions are asked,” Ternovsky said. “But this chair needs to be kicked from under our feet.” Ternovsky highlighted some of the issues that needed to be discussed, electoral fraud, the politicization of the courts, the police, the media and Pussy Riot.

According to Ternovsky, the main problem with Russian politics is “the immutability of the authorities.”

“Will Russia ever have a removable authority?” Ternovsky asked Putin.

In response, Putin cited the Constitution, which bans anyone from serving as president for more than two terms in a row, explaining that this is why he stepped down as president. Putin said he did not “amend the Constitution for his personal needs and left only to occupy a less serious post, which was nevertheless exceptionally important for the life of the country.” The president added that he then he made use of his constitutional right and was nominated once again for the presidency. As for turnover of the authorities, Putin believes that continuity plays an important part in government.

The president did not comment on the court system, his attitude to the Pussy Riot trial or the bias of federal TV channels and there were no more questions about these topics from the audience.

There were, however, complaints about the police system. Specifically, Anna Levchenko from St. Petersburg, described some problems she had with the police in her work with an anti-pedophile movement: “I put 50 pedophiles behind bars last year,” Levchenko said, adding that unfortunately one of the St. Petersburg police precincts refused to cooperate with her group. Putin promised that he would raise the issue with Interior Minister Vladimir Kolokoltsev and Investigative Committee Chief Alexander Bastrykin, but also to do his best “so such things never happen again.” Vyacheslav Sayer of Moscow said that his friend was detained for taking part in the May 6 rally, although he was not in Moscow at that time. The president suggested that the matter should be addressed by the prosecutor’s office.

There were also questions about the white ribbons. “Last year you commented on our symbols while choosing quite ‘interesting’ words,” said Viktor Kuznetsov, spokesman for the Penza city white ribbon movement. “I was wondering whether you have changed your attitude.” Putin explained that in December he was speaking about the “color revolution” and said he was “sorry for the people that were using the technologies developed abroad,” but he went on to say that he knew there were many patriotic people at the rallies and that he had great respect for them.

Dmitry Kiryanov, who did not specify where he as from, told the president that he was planning to register his own NGO in Russia, but was concerned about how the new laws might affect him. Putin assured Kiryanov that there would be no interference, because the amendments only applied to NGOs engaging in political activities and financed from abroad. But, the president added, even these NGOs will face no real restraints – they will just be required to be registered as “foreign agents.”

Alexei Goryachev of Yaroslavl asked the president why bottled water was more expensive than beer, prompting the president to reply that the question was one for the market.

Anastasia Melnikova asked why the new laws to create political parties were so lax, saying that there was no need to have parties with no support. Putin responded that she had answered her own question.

“This is the answer – in order for them to see that they have no support,” Putin said.

Another girl, who did not give her name, asked Putin what he dreamed about. “I feel too shy to say,” Putin said, before adding “seriously, as a rule, I have no dreams.”

The text has been abridged from the original, which can be read in Russian in Kommersant Daily.