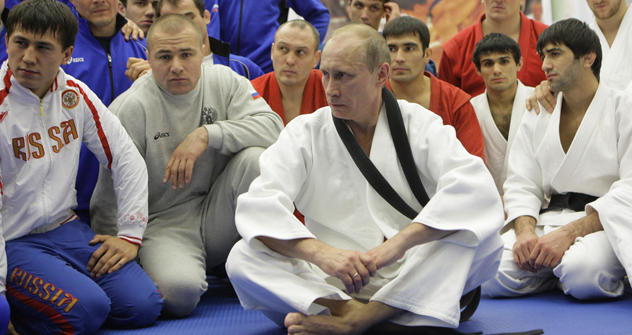 Vladimir Putin, who has been Russia’s most famous judoka, lauded the "brilliant" performance of Russia's judo exponents at the London Olympics, where they have won three gold medals. Source: Reuters / Vostock-Photo

Arsen Galstyan, Mansur Isaev and Tagir Khaibulaev took gold at the London Olympics in a sport few Russians had heard of before Vladimir Putin became president.

During the presidency of Boris Yeltsin, Russia’s young people took an unprecedented interest in tennis, the favorite sport of the country’s leader. In the space of a decade, Russia became an international force to be reckoned with in the world of tennis, producing grand slam champions on both the men’s and women’s tours.

Now, Russian judo is benefiting from a similar effect. Putin, a well known judoka (as judo competitors are known), emphasized development of the sport during his first term as president and although the sport does not have the international cache of tennis, the focus has paid off – Russian athletes have won three gold medals in judo at the London Olympic Games.

Russian judokas have achieved success on the world stage before. Arsen Galstyan won a gold medal in the European judo championships in 2009 and a bronze in the 60 kg event in the 2010 World Championships in Tokyo, but few considered him a gold medal prospect.

The buzz around Galstyan started only when he shocked the international judo fraternity by defeating the top-ranked judoka in the 60 kg category, Uzbekistan’s Rishod Sobirov, in the Olympic semi-finals. The victory over Japan’s Hiroaki Hiraoka in the final made the 23-year-old an instant sensation across the country, especially in the flood-ravaged territory of Krasnodar that Galstyan calls home.

His victory was widely celebrated by the residents of the Krasnodar Territory, and the story has additional positive aspects for the southern Russian region that has seen some of the country’s worst ethnic violence. Galstyan was born in Armenia in 1989, when the country was a part of the Soviet Union. His parents later immigrated later to Russia. Now, Galstyan has become a national hero.

Several days after Galstyan struck gold, Mansur Isaev followed suit by defeating Japan’s Riki Nakaya in the 73-kg class final to win Russia’s second judo gold. The 26-year old resident of the Chelyabinsk, was also not expected to medal in London. Isaev’s best performance before the Olympics was a bronze medal at the 2009 World Championships in Rotterdam. It remains to be seen whether the governor of the Chelyabinsk Region will honor a pre-Olympic promise to give $1 million to each gold-medal winner from the region. But Isaev will no doubt benefit from his instant celebrity. Isaev is also a poster-child for multi-ethnic Russia – he is a Muslim and an ethnic Avar, a community with origins in the Republic of Dagestan.

One of the keys to Russia’s gold haul in judo in London was the hiring of Ezio Gamba as the team coach. Gamba won a gold medal for Italy in the 71 kg class event in the 1980 Moscow Olympics, and both Isaev and Galstyan gave a lot of credit to their Italian coach and his rigorous workout regime.

Galstyan also gives credit to Putin for his support of the sport. In an interview with a Russian television channel, Galstyan spoke of his New Year’s Eve meetings with the president. In addition to encouraging Russian judokas, Putin was the brainchild behind the Zvenigorod Judo Academy, a facility that promises to produce many more champions.

That the gold medals were won by residents of cities far from Moscow indicates how the president’s efforts to popularize the sport struck a chord in smaller regions. The London gold medals are sure to build on these efforts and usher in a new wave of popularity for the sport.