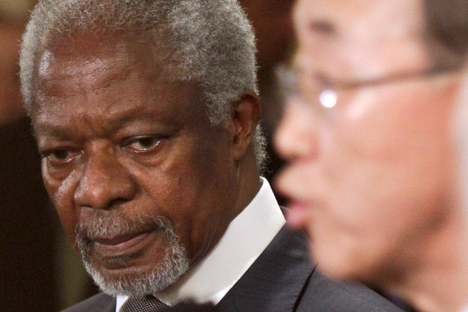 Annan’s mission may have failed not only because the parties to the Syrian confrontation have refused to seek a compromise, but because the international community has as well. Source: AP

The UN security council looks for scapegoats in the resignation of the UN special envoy to Syria.

The U.S. government has blamed Russia and China’s refusal to cooperate on Syria for Kofi Annan’s resignation as special UN envoy to that country. White House Press Secretary Jay Carney said Annan’s decision not to renew his mandate, which runs out on Aug. 31, highlights the failure of Russia and China to support resolutions on Syria at the United Nations Security Council, which he characterized as “meaningful resolutions against Assad that would have held Assad accountable for his failure to abide by his commitments under the Annan plan.”

In turn, Russia and China expressed regret over Annan’s resignation and blamed it on the West’s lack of approaching the situation constructively. “Some countries paid lip service to Kofi Annan’s peaceful initiatives but acted contrary to them. Their main task is to conceal what is actually going on in Syria,” said Russian Ambassador to the UN Vitaly Churkin.

Deputy Foreign Minister Gennady Gatilov tweeted: “Annan’s decision not to seek reappointment as UN Special Envoy for Syria raises a lot of questions over a future settlement in that country. He is an honest international intermediary but there are those who want him out of the game, in order to be free to act by force.”

The news of Annan’s resignation as special envoy came amid a flood of reports on escalation of the Syrian conflict. Government troops were engaged in fierce battles with the armed opposition for the city of Aleppo and other reports stated that Syria was amassing troops on its border with Lebanon to stop weapons smuggling. President Bashar al-Assad addressed the nation the day before, saying that the country’s fate was being decided in the current standoff.

It seems safe to say that Annan’s mission failed not only because the parties to the Syrian confrontation have refused to seek a compromise, but because the international community has as well – the West and the Arab League, on the one hand, and Russia and China, on the other. While the United States and its allies have made it clear that they see no possibility of a settlement involving Assad, Moscow and Beijing continue to insist on maintaining a role for the Syrian leader in the conflict resolution.