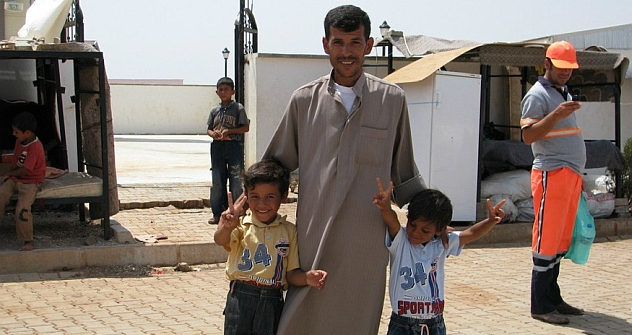 The Turkish town of Kilis, located three miles north of the border with Syria, brings together refugees of the Syrian civil war. Source: Leonid Pchelnikov

The small Turkish town of Kilis, a mere three miles north of the border with Syria, houses what is the largest camp for refugees of the Syrian civil war.

The Turkish town of Kilis, located three miles north of the border with Syria, brings together refugees of the Syrian civil war. Source: Leonid Pchelnikov

According to Syrian President Bashar al-Assad’s opponents, Kilis is precisely here that a corridor controlled entirely by the opposition leading deep into Syrian territory – right up to the country’s second city of Aleppo – begins.

The camp, which is located on a 36-hectare area in a neutral zone, doesn’t really look like a refugee camp. There are no tents here, no lines for food, no grief-stricken women pulling their hair out and no dirty children begging for alms.

Instead, some 2,000 containers painted white make up a small, but entirely livable town. There are two schools accommodating a total of 5,000 pupils, two mosques, each of which can hold 1,000 people, as well as a shop, a medical station, some small markets, a bank branch, some children’s playgrounds, a press center and a police station. There is also free Internet access. Each container-house has an air conditioner, water, and a drainage system. Many homes even have satellite dishes fixed to the roof.

A total of 11,000 people live in the camp, most of whom have come from the northern border provinces of Syria. There are essentially two demographic groups here: the very young, and the very old. There are practically no young men, and it is clear from the looks on their faces that the ones that do live in the camp have been involved in the fighting.

The camp was built last year and cost the Turkish government $35 million. A further $2 million is spent every month on keeping the place running – on paying the salaries of the 150-strong police force, taking care of utilities costs, and providing state benefits for the refugees.

Yet the people who live in these camps do not have the right to be called refugees; the Turkish Foreign Ministry has a much more complicated way of describing them: they are “people who are temporarily under protection [of the Turkish government].” What this essentially means is that they will eventually return to Syria. But they can only do so if the current regime is brought down, for the overwhelming majority of them are close relatives of those fighting for this very goal.

And this is no secret. Abdul Karim, an electrical engineer from Aleppo, said he had always been a successful businessman. He didn’t even have any real issues with the regime, although he was critical of Assad. But then he opened his eyes: he saw a country mired in tyranny and dictatorship. So, in the spring, he took his wife and his youngest children and left Aleppo, while his two oldest sons stayed on so they could help in the “fight for freedom.”

A bearded 25-year-old man named Fahed had until recently painted houses for a living. Now, he is a soldier for the “Free Syrian Army.” He said he is in the camp visiting his mother and father. He doesn’t have much time, as he is just about to head off back to the front.

“I took part in the street demonstrations at first, just like countless other young people,” Fahed said. “We weren’t thinking about taking up arms – we were hoping that democratic change could be achieved peacefully. But they started to get violent breaking up the protests, threatening us with prison sentences and other punishments. We had no choice: either fight, or die.”

Many of those living in the facility are happy to complain about how the West in general, and the United States in particular, has abandoned their country, leaving them to fight alone, providing neither military, nor monetary assistance. But they have plenty of machine guns and some recently acquired mobile anti-aircraft missiles. They also have a very nice refugee camp.

Others admit that the opposition is made up of al-Qaeda supporters. “They are Muslims, after all,” said an English teacher named Mahmoud, speaking about al-Qaeda fighters, “ and they can’t just stand by and watch how their brothers are being killed. I’ve met foreigners, people from Pakistan, from Afghanistan, who are fighting on our side.”

“We have some very difficult times ahead,” he continued. “It’ll be very hard to begin with, but gradually we’ll build a far more just society.”

This article is abridged from the original version, which can be found in Russian in the Rossyiskaya Gazeta website.