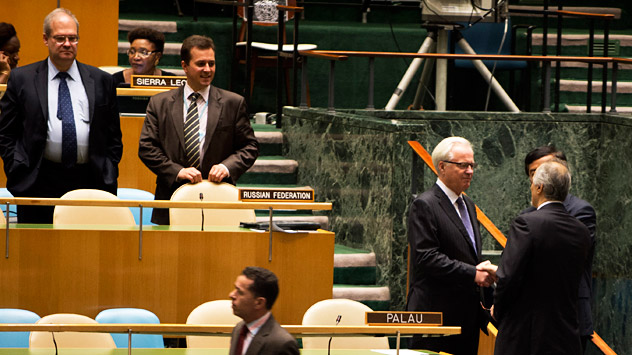 Experts note that the results of the General Assembly vote may provide further arguments for those who advocate unilateral actions against Damascus, not ruling out military action. Source: AFP / East News

Yet another UN resolution on Syria has been rejected by Russia, but this time the vote was by the entire UN General Assembly, not just the Security Council.

The resolution, which was submitted by Saudi Arabia and backed by the West, was supported by 133 countries; only 12 voted against. General Assembly resolutions, unlike those of the Security Council, are not binding, but they are seen as a kind of referendum of the international community. In that sense, Russia and China have suffered a serious setback.

In addition to Russia, China and Syria itself, the countries that voted against the resolution include Belarus, Iran, North Korea, Zimbabwe, Myanmar and representatives of the Latin American anti-imperialist bloc: Cuba, Venezuela, Nicaragua and Bolivia. Compared with the vote on the earlier Syria resolution in February, the change is minimal. At that time, the 12 delegations that were opposed were virtually the same, with the exception that this time Ecuador decided to abstain while Myanmar voted against.

Otherwise, the results of the vote give no comfort to Moscow. The resolution was backed by nearly all the European states, including Serbia, which dispelled any illusions that the new moderate nationalist Serbian president, Tomislav Nikolic, would pursue a pro-Russian policy. This test has shown that, in spite of the change of government, Belgrade votes along Brussels, and not Moscow.

The BRICS grouping once again failed to come out as a monolithic political bloc. Russia and China rejected the resolution; Brazil and South Africa voted for it and India abstained.

As for the Arab countries, the opponents of Syria’s President Bashar Assad closed ranks. Of all the Arab League members, only Lebanon and Algeria abstained. Yemen did not vote. Even Iraq and Iran found something to agree on in the vote.

Experts note that the results of the General Assembly vote may provide further arguments for those who advocate unilateral actions against Damascus, not ruling out military action. The United States, the EU and the Persian Gulf countries have repeatedly said that the UN Security Council, paralyzed by the inaction of Moscow and Beijing, does not reflect the opinion of the world community, so the “friends of the Syrian people” have the moral right to bypass the Security Council.

The original Russian text is available in Kommersant Daily.

“The UN General Assembly’s resolutions are used as an element of political pressure,” said Sergei Ordzhonikidze, a member of Russia’s Public Chamber who served as director-general of the United Nations Office in Geneva from 2002 to 2011.

Ordzhionikidze noted that the UN General Assembly vote on Syria was a political move by those countries that were dissatisfied with the fact that the UN Security Council had not approved the decision they have been trying to impose.

“This has been done not for the first time. There have been cases when some countries, not being able to have some decisions approved by the UN Security Council, tried nevertheless to push them through the UN General Assembly. This has been used as a political leverage,” Ordzhonikidze said.

He pointed out that the decision is non-binding and has as much power and influence as a newspaper article. "Well, maybe a little bit more," he added.