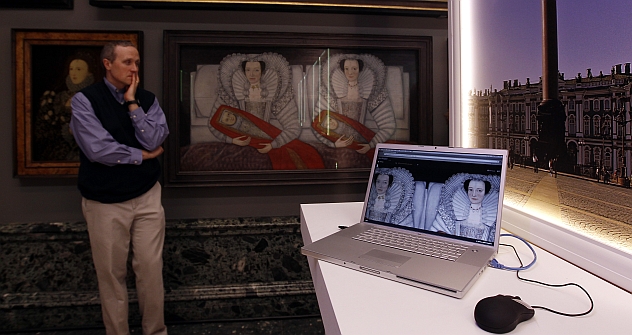 Google's Art Project website is seen on a laptop computer during its launch at the Tate Britain gallery in London February 1, 2011. Source: Reuters / Vostock Photo

Google Art Project's new features allow users to take walk through five Russian museums without having to leave their chairs.

Although the idea of putting art exhibits for view on the Internet is not a new phenomenon, the Google Art Project has taken the concept to a whole new level, allowing users to access collections from museums around the world from a single portal.

Russia was one of the first countries to join the project, and now five Russian museums are participating, along with 150 others. The impressive list of participants includes the Tate Gallery in London, Versailles, the Museo Thyssen-Bornemisza in Madrid, the Uffizi Gallery, the Metropolitan Museum, the Museum of Islamic Art in Qatar, Museums in China and Hong Kong and even some paintings that are currently hanging in the U.S. White House. The project can be accessed by telephones and tablets with Android and the finishing touches are being applied to a version for iPad. In Russia, initially only the Tretyakov Gallery and the Hermitage were a part of the project, but in April they were joined by the Pushkin Museum of Fine Arts, the Russian Museum and the Nikolay Roerich Museum.

A new culture of philanthropy found its way in UK

The project’s comprehensiveness, made manageable by an extensive search function, is not the only way Google’s project is different from anything that has come before.

There are three main elements to its uniqueness. First, thanks to the same special camera used for shooting the streets and buildings in Google Street View, parts of the museums have been photographed in panorama.  So rather than looking at separate slides, users can see how pictures or statues look in the museum's surroundings thus giving the viewer a much better idea of the curator's intentions.

The second bit of innovation is that some of the pictures have been photographed at an ultra-high resolution of 7 billion pixels.  Of particular note were two exhibits that were photographed in two different Russian museums this year – Canaletto's "Bucintoro Returning to the Molo on Ascension” at the Pushkin Museum of Fine Arts and "the Last Day of Pompeii" by Karl Briullov at the Russian Museum.  Users with high-quality screens and a lot of patience can now study each of these paintings in the finest detail.

The third and final advantage is that users can enter the Google Art Project via their Google accounts and create their own personal collections. The next step in the project will be a function allowing users to share their collections via social networking sites and choose friends whose interests coincide in much the same way as musical and literary preferences are currently shared on these sites now.

The site is open to new partners. "We are glad to hear from any organization that expresses an interest in our project.  Our site has a special form that any museum can fill out including Russian ones," said a Google representative, adding "we are not creating an alternative to actually going to the museum, but not everyone can actually go to the museum themselves. Our project will be extremely useful to students or other people with a limited budget."

Being involved in Google Art Project is only one way Russian museums are taking an active role in the technical revolution.  In February, the Hermitage launched its own free i-phone "Hermitage Museum app" including a version in English.  This app allows visitors to take standard excursions, buy tickets online and get the latest news from the Hermitage.  Its developers are planning to translate the app into several other languages.

The collection of the State Hermitage Museum in St Petersburg includes more than three million works of art, including paintings, graphic works, sculptures, handicrafts, archeological and numismatic findings and other artifacts of world culture. The museum was founded by Catherine the Great and is located in the Winter Palace, once an official residence of Russian monarchs. The regular exhibition is not limited to the main palace building; it is spread throughout five other buildings in the historic city center.

The Russian Museum is a unique depository of artistic treasures, a famous restoration center and an authoritative institute of academic research that contains 400,000 exhibits. It is also the first state museum of Russian fine arts in the country. It was established in 1895 by Emperor Nicholas II and is located in the Mikhailovsky Palace in St. Petersburg.

The Pushkin State Museum of Fine Arts is located in a museum complex in central Moscow. The complex includes the Main Building, Building of 19th and 20th Century European and American Art and the Private Collection. The museum was founded in 1893 by Ivan Tsvetaev, father of famous poet Marina Tsvetaeva. The museum contains many copies of ancient cultural monuments, Egyptian artifacts, antique sculptures and even architectural monuments. It also has a large collection of original impressionists and post-impressionists' works, including paintings by Claude Monet, Edgar Degas, Vincent van Gogh and Pablo Picasso.

The Nicholas Roerich Museum is situated in the very heart of Moscow, in the ancient Lopoukhin estate. The museum features a unique collection of Himalayan sketches painted by Nicholas Roerich. Visitors can also find various relics, gifts from Roerich’s Spiritual Teacher, manuscript and art rarities, books and monographs from the Roerich Memorial Library together with personal belongings and objects that accompanied him in his long wanderings, including photo documents and a collection of ancient bronzes from the Indian valley of Kulu. The Nicholas Roerich Museum is the only one in the country that organizes traveling exhibitions in the most remote corners of Russia, not confining itself to major cities and cultural centers. This gives millions of people an opportunity to come into contact with the Roerich canvases.