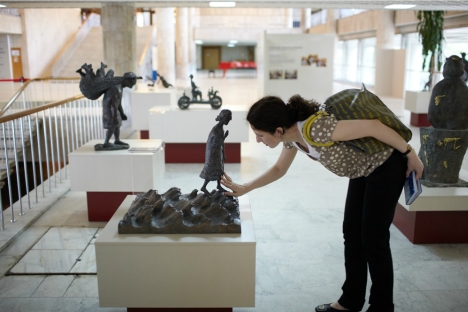 The exhibition “Language of Sculpture in Braille” in The State Tretyakov Gallery’s hall on Krymsky Val, Moscow. Source: Elena Pochetova

The State Tretyakov Gallery’s hall on Krymsky Val, Moscow, is hosting an exhibition for the blind and partially sighted as part of a bigger project called “Language of Sculpture in Braille.”

The exhibition “Language of Sculpture in Braille” in The State Tretyakov Gallery’s hall on Krymsky Val, Moscow. Source: Elena Pochetova

Visitors seeing the sculptures on the second floor of the State Tretyakov Gallery’s modern art facility for the first time might call them odd, awkward or grotesque. But these artworks are meant to be touched, not looked at.  They are part of a bigger project called “Language of Sculpture in Braille.”

Alexander Smirnov-Panfilov was born in 1963 and graduated from the Moscow Surikov Art Institute. He teaches a sculpture class at the Ilya Glazunov Academy of Fine Arts. His works appear in the collections of the Ministry of Culture, the Russian Museum, the American Institute of Architects in Portland, and private collections in Russia, Germany, Italy, and the United States.

The 25 works of art constructed from bronze, wood and stone by Moscow-based sculptor Alexander Smirnov-Panfilov are arranged on low, broad platforms so that visitors will not get tired of “looking” at the pieces with their hands. The display was designed by Germany’s Franke Steinert, which arranges exhibition spaces for visually impaired people in Berlin on a regular basis. All the sculptures have descriptions in Braille.

The display, entitled “Side notes,” opened in late May. The project is included in the bigger program “Museum Open to Everyone,” which was launched by the Tretyakov Gallery in 2007. The goal of the program is to bring works of art closer to people with disabilities, making them more accessible. In 2011, the exhibition received a grant from Vladimir Potanin’s charity foundation, which made this year’s project possible.

This display’s concept is the sculptor’s interpretation of characters from the history of art, including Toulouse-Lautrec, Van Gogh and Chagall. Van Gogh is represented in a slightly different way. Said Elena Gerasimova, the curator of the exhibit, “The display presents Van Gogh’s sculptural paintings – they are not exact replicas, but it is an excellent chance for the people who cannot see to discover what used to be unattainable. Exhibitions designed for people to touch give them a better opportunity to get to know this style in art and, for the blind, it might be the only way to discover the world of fine arts.”

U.S. and Russia work together to assist Russians with disabilities find employment

The display is popular not only with visually impaired people but also those with healthy eyes, especially children. The very fact that they are supposed to touch the exhibits delights them: “Normally you can’t touch anything in museums, but here you can, and I love it,” said a young visitor named Andrei.

“Side notes” will be open to the public in the State Tretyakov Gallery’s hall on Krymsky Val until late November 2012. A new “tactile” exhibition will follow in December.