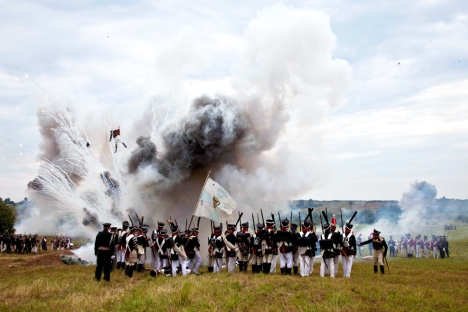 The reenactment of the Lubino Battlefiled was part of Russia’s celebration and commemoration of the 200th anniversary of the Patriotic War of 1812. Source: Olga Lisinova / Rossiyskaya Gazeta

Organizers of the large-scale reenactment of a major battle between Russian and French troops hope the event will remind people that Borodino was not the only battle of the Patriotic War of 1812.

In the beginning of August historical reenactors gathered on the Lubino Battlefiled on Russia’s Smolensk Region to carry out a large-scale reenactment of the Aug. 7, 1812 battle known in Russia as the Battle of Lubino and in France as the Battle of Mount Valutina.

The reenactment was part of Russia’s celebration and commemoration of the 200th anniversary of the Patriotic War of 1812.

View the gallery: Large-scale reconstruction of the 1812 war took place in the Smolensk Region

It is hard to say whether or not the Smolensk reenactment was able to beat any records of similar events that have taken place at the better-known Borodino battlefield, but more than 1,000 Russians and more than 150 Poles gathered at the site in an attempt to reconstruct the battle with the utmost in historical accuracy. Although the weather on the day of the reenactment was less than perfect, the highway leading to the battlefield was packed and the buses hired to transport spectators turned out to be too small to accommodate everyone who wanted to witness the battle

Oleg Sokolov, the founder of historical reenacting in Russia, appeared as French soldier and commander Michel Ney. In his opinion, the reenactment without a doubt surpasses all similar events that have been performed in Russia, but he was still disappointed in the celebration.

“It seems to me that the 200th anniversary of the Patriotic War was a bit blurry for us,” Sokolov said. “The reenactment of Lubino could have been on much larger scale, and this a realistic goal. Sure, you would need more money, more experienced organizers that have worked in this field, and this work should have been started earlier.”

Spectators, however, praised the reenactment. Onlookers coverd their ears as musket and cannon fire thundered through the air and smoke from the guns drifted over the field. The cavalry attacked the fortified redoubts and carried out cunning flanking maneuvers while the infantry lined up in a square and, bristling with bayonets, stood to the death; now and then heated fights broke out. French General Charles-Etienne Gudin was mortally wounded, militiamen helped their friends with spears and pitchforks, the French captured General Nikolai Tuchkov and the support staff took care of the wounded.

The fighting did not end as it did 200 years ago. The participants in the reenactment along with local Governor Alexei Ostrovsky and representatives of the French Embassy in Moscow lined up around a freshly dug grave and commemorated the memory of 28 Russian, French and Portuguese soldiers whose remains of whom had been found on the battlefield not long before and were buried in a tomb of the unknown in a service that included both Orthodox and Catholic prayers. A memorial stone was placed in memory of this event on Lubino battlefield.

“In any history, there are always periods that for various reasons people focus on, and forget about others, which are sometimes important events,” Sokolov said. In Russian history, practically all of the War of 1812 is reduced to the Battle of Borodino, making it so that the French basically fell out of the sky there. . . there was the Borodino battle, then it seems Moscow burned down, and it all ended there! Really, a war is a long chain of events, and the Smolensk battle played a very important role in it.”