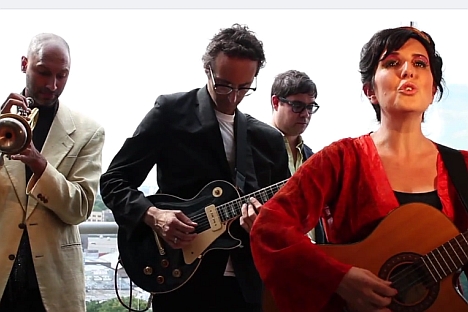 Russian music in New York is a far cry from the stereotypical balaiaka player in traditional dress. Today’s Russian-American musicians cover Lady Gaga, perform with sword swallowers and riff on the French chanson.

Brought to the U. S. from Ukraine, Brooklynite Alina Simone inherited traditions of not only her native Ukrainian folk, but also the Russian punk wave. Source: Vimeo / Break Thru Radio TV

Russian rockers live and thrive in New York, a city with a Russian population of more than 300,000. The Russian rock scene in the city is very eclectic and includes musicians performing in Russian and English in variety of styles, from “death folk” to “electro-garage with vaudevillian flare.” Regardless of the type of music they perform, the artists use their work to react and respond to their unique relationship with both Russia and the United States.

Broughtto the United States from Ukraine at the age of one-and-a-half, Brooklynite Alina Simone seems to have inherited traditions of not only her native Ukrainian folk, but also the Russian punk wave. “Simone may dream of that mythical Ukrainian home, but she expresses herself in the language of crunchy rhythm guitars, chiming leads, and confessional vocals that has soundtracked her American life,” wrote Pitchfork, an online magazine covering the independent music scene, about her latest album “Make Your Own Danger.” A renowned singer and songwriter, Simone plays dark, or death folk, and has a strong love for Yanka Dyagileva a, Siberian punk musician who died tragically in 1991. "I released an album covering Yanka Dyagileva a couple of years ago and also love Kino and Auktyon. I have a particular soft spot for old chanson, especially gypsy-style stuff from Odessa, Dina Vierny's one chanson album,” Simone said. She is also a writer and prefers dark satire, a kind of arch, black humor that she witnessed a lot growing up with her parents who came to the U.S. as political refugees. Simone’s next novel is coming out next summer in the U.S. and UK. The next chance to see her will be at Aquarium on Brighton Beach where she will be performing with a female sword swallower for the Art on Brighton Festival on Sept. 8. The festival has been described by its organizers as a "celebration of the creative post-Soviet immigrants of Brighton Beach, New York City, and beyond."

NewYork-based band Interzona, lead by Mikhail (Mike) Danilin, is probably the Russian-American band most recognized in Russia. Founded in 1998, Interzona gets its inspiration from both Russian rock and Western electronic bands such as Prodigy, Underworld, Orbital and The Future Sounds Of London. Danilin defines their style as “an intermediate state between rock and pop, live and electronic, dark and positive, reality and fantasy, retro and futurism.” The mood of modern urban neo-romanticism is a distinguishing motif of the band, which is in a state of constant transition from yesterday to tomorrow, now and here, according to Danilin. Interzona toured Russia this summer and played Moscow’s Gogol club in June. The band’s next show will take place at the DROM club in New York on Aug. 23. Among the band’s other plans is returning to Russia for a series of shows and recording several tracks for a big Berlin label, which as yet remains unnamed.

Eve Lesov is an alt-pop singer-songwriter whose strongest sides are her intense voice and masterful piano skills. She plays both solo and with the band, and has a long history of collaboration with various musicians. Lesov performs with an impressive accompaniment of vocals, piano, violin, drums, cello and bass. Her compositions normally “start with her voice and piano, opening fruitful ground for other instruments and electronic effects to embellish the sound,” according to one of her band members. Lesov shares darkness of her fellow Russian-American musicians with such songs as “Maniac,” “Phobia” and “Right through the window.”

“You don’t need a band to be able to express yourself,” said Dmitry Wild, who was born in Moscow, raised in New York City and now makes his home in California. This philosophy is why he performs solo, in a style of something he calls “electro-garage with vaudevillian flare.” Music for Wild isa “form of revolutionary expression;” it is him and the present moment and whatever he can do with it. Wild treats his guitar as a weapon and lives up to his name on stage. He has 5 albums out and is currently collaborating on a new EP with Volod, a producer and bass player from the famous Russian band Punk TV. On Aug. 31, Wild is playing the Cavestomp party at the Parkside Lounge in New York with a guest appearance by his wife, Mrs. Wild. “I’m not a nice artist,” Wild said, “and I’m not going to be nice at the upcoming concert.”

New York-based band Mad Meg plays hard urban ballads with an eclectic sound – partially the result of the fair amount of Russian minor key debauchery in their music. Mad Meg is international in a unique way; the band members hail from Russia, France, the United States and Kazakhstan, each bringing his own flavor to the sound. “My character is me, just a bit more brutal,” said bandleader Ilya Popenko, who is a professional photographer and considers the band a side project. The band’s repertoire includes songs such as the Russia-themed, mantra-like “I’ve bought tickets to Moscow” to a loud energetic cover to Lady Gaga’s “Paparazzi” that is strangely reminiscent of Tom Waits. “These are desperate songs but this is not suicidal desperation,” said Popenko. “The songs that I try to write are for that one guy who dances awkwardly alone and drunk at a wedding and sings loudly out of key. The desperation that takes form in creative self-expression and dark sarcasm.”  Mad Meg is now working on its first EP and shooting a music video. Both are due to be released early this fall.

Alternative rock singer and songwriter Ellina Graypel moved to the U.S. in 1992 but recently decided to reconnect to her roots and started writing songs exclusively in Russian. According to Graypel, her attempts to reconnect with the reality of her native country result in a knitting together of the two cultures – Russian and American – as well as the two languages. “It happens so, that dark motifs are more attractive to people because the public easier connects with suffering rather than happiness,” Graypel said. “I have a few dark notes in my music, too, but I prefer to consider it just another, different color.” Currently Graypel is recording a new album, which is due by the end of September, including a song with Shakespeare’s lyrics. Following the album release, Graypel is planning to tour Boston, Washington, D.C. and Philadelphia.

Experimentalfolk-ethno collective MOON SHAINYA was created by two musicians and an artist. Trying to give the band clear, yet not very direct connection with moonshine (“samogon” in Russian) the members started playing with words and ended up with ‘Moon’ from English and a Chinese hieroglyph, that in English spells “shainya” and means “shining” or “illumination.”  Among the band’s exotic instruments is a jaw harp, skillfully played by Rashid Akmanov.