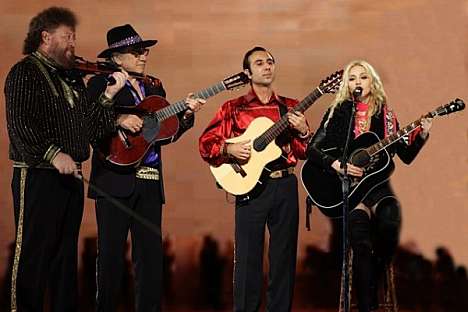 Vadim Kolpakov has sung, played his guitar and danced his way around the world, even joining Madonna for her world tour from 2008 to 2009. Source: Press Photo.

Virtuoso Romani guitarist Vadim Kolpakov, who is recording a new album with the 75-year-old Rada Volshaninova, has performed with musicians all over the world, even Madonna.

Vadim Kolpakov has the wanderlust. Not necessarily because he is a Romani, descendants of a people who migrated out of India a thousand years ago. Kolpakov is an exceptional performer – crossing continents and genres, he has sung, played his guitar and danced his way around the world, even joining Madonna for her world tour from 2008 to 2009.

Kolpakov, like many Russian Romani guitarists, plays a seven-string guitar. His touch is light and versatile; the music seems to flow effortlessly from his instrument, airy and poignant. Originally from Saratov, he is the nephew and pupil of acclaimed Romani guitarist, composer and singer Sasha (Alexander) Kolpakov.

It wasn’t easy to be Romani in the Soviet Union, where they were one of many minority groups who were discriminated against. Still today they face social problems and stereotyping. At the same time, Romani culture was, and is, wildly popular in Russia. One of the most famous and oldest Romani theaters in the world, the Romen Theater in Moscow, was built in 1931 and has enjoyed success throughout the decades, celebrating its 80th anniversary last year.

The theater opened on January 24, 1931 under the name “Indo-Romen” theater studio, and presented a performance in two parts. By the end of the year, the theater staged its first full musical-dramatic performance, “Life on Wheels”, a three-act show based on a play by Romani author Alexander Germano.

Since 1940, the theater performs all of its shows in Russian. Over the decades, many famous people have performed on its stages, including popular Soviet actress Rada Volshaninova; actor, poet and composer Dmitry Buzylev; guitarist, singer and composer Alexander Kolpakov; and singer Valentina Ponomaryova. The well-known Romani actor Nikolai Slichenko is the current director of the theater.

Kolpakov left his home in Saratov at age 14 to live and study the guitar with his uncle in Moscow, who was also the  Romen’s music director at the time. A year later, he was already performing at the Romen where he became a well-known fixture on the stage until he left in 2004 to go to the US, where he first performed with the Russian early music ensemble Talisman, then moved to Charlotte in 2006 to take up a post as artist-in-residence at the University of North Carolina in Charlotte, teaching guitar, dance and singing in the Roma tradition. Since then, he has since made the United States his home, and started a family. He founded the group Via Romen and recently returned from Israel, where he performed with Russian Jewish singer Svetlana Portnyansky.  Although his uncle is semi-retired, he also performs with him as a member of the Kolpakov Trio.

It was as a member of the Kolpakov Trio that Vadim found himself performing at Madonna’s London home for her birthday. A close friend and collaborator, Eugene Hutz (the leader of New York-based gypsy punk band Gogol Bordello) had given the pop singer a CD of the trio and she asked them to play at her party. An invitation to join her Sticky & Sweet tour soon followed.

Working with someone “so artistic, so creative” was an amazing experience, Kolpakov says, although at first he thought the idea was a little “crazy.” Their music, they felt, was very different from pop music and the kind of stadium shows the pop icon does. Their initial hesitation was soon forgotten, however. The third act of her four-act-show was called Gypsy and included a Romani-infused remix of her song “La Isla Bonita” and solos for the Kolpakov trio – Vadim found himself center stage dancing, playing guitar and singing.

Madonna and her entourage spent nine months on the road doing 85 shows on four continents. The audiences’ reactions to Romani music didn’t differ much by country, Vadim said; people didn’t necessarily recognize the music as Romani, “but it was so energetic and powerful and emotional that everyone liked that – they didn’t know in the beginning what it was.”

But it does worry Kolpakov that people are not familiar with, or are even hostile toward, Romani culture, which some think of as families in colorful outfits begging and stealing. His native Russia isn’t that bad, he says, but some countries in Eastern Europe, such as Romania and the Czech Republic, are particularly antagonistic toward the Romani.

He recalled that at the concert in Bucharest, Romania, Madonna made a statement in support of Romani people and other minorities. She was met with booing and jeers, Kolpakov said.

While Romani people in the United States may not face the level of antiziganism, defined as an open hostility to Romani or Gypsy culture, that they did in Europe, their culture remains very much misunderstood, as portrayed by “documentaries” playing up stereotypes. A new reality show on the National Geographic Channel already has viewers groaning – among them Vadim Kolpakov. “It’s filled with the same stereotypes as “Big Fat Gypsy Weddings” (a British reality series). I was just surprised because – well, they show such terrible things; things that are simply not true.” The show focuses on a Romani family in New York where daughters are supposed to be married off in their mid-teens and everyone is in the family business of fortune telling. The New York Times reviewer called the show “deplorable.”)

Kolpakov was born and raised in the oral tradition, a remarkable aspect of Romani culture, and taught to play not from sheet music but by ear. He laments the fact that even in Russia, these traditions of live music are being abandoned for pop music. “It feels like “real” music, live music, has passed away. And Romani music is a part of it.”

Vadim has made many recordings with his uncle and also with his group Via Romen, which is currently recording an album with the 75-year-old Rada Volshaninova, a well-known actress in Soviet movies and a Romani singer of the old school. Romani music is improvisational and spontaneous in nature and much is lost in recordings. Be it Russian traditional music, Romani music or any kind of world music, “the real thing” is in live performance. Kolpakov also keeps the music alive by teaching students at all levels, from beginners to professionals, in world music, improvisation and technique.