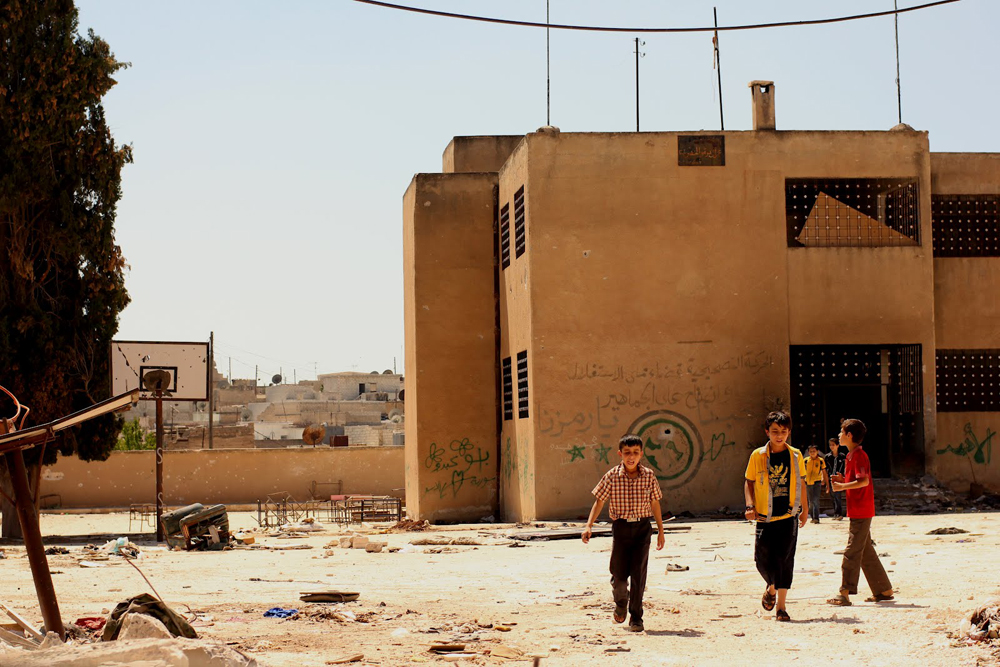 The main problem of the camps of refugees is the lack of water, a problem with the same repetitive diet, and suffocating boredom. Pictured: Children walk round the playground of their old school in Azaz, 50km north of Aleppo. Source: Spike Rogers, Al

For Syrian refugees in Kilis, life is safe, but boring. International volunteers are working to give the refugee children something to think about beside the war.

For more than a year now, the small Turkish town of Kilis has hosted a refugee camp for those driven from their homes by the conflict in Syria. Here, in a town three miles from the border made of metal containers and wire fences, more than 12,000 people including 4,000 children live an unsettled life.

The camp is considered one of the best of its kind. It has a shop that sells food and basic supplies along with a mosque, school and medical center.  Although the shop allows Turkish-government issued Ids to act as credit cards, there is a black market for cigarettes, makeup and other kinds of contraband that accepts either Syrian or Turkish liras.

Not just anyone can wander into the camp. To enter to the camp, residents must present an identity card and have thier index fingerprint read by a touchscreen. Nevertheless, the Turkish government was forced to build a concrete wall facing the Syrian side of the camp and a few months ago, two refugees were shot by army snipers inside the camp. Shots were also fired at the camp's water tanks. Today, the 10 meter-high wall is a bonafide mural, painted by the very children it protects, depicting the towns and cities most affected by the bombing. The faces and names of martyrs have also been portrayed. It blocks the view of the Syrian refugees from their homeland.

Volunteers from all over the world have come to the camp in an attempt to make life a little brighter for its reisdents. Italian citizen Giacomo, 25, volunteers with a small English-language program for kids. The main objective of the program is "social adaptation for children through creative process.”

“Of course, none of the participants are expected to speak perfect English, but we offer a distraction from the routine of doing nothing - that's for sure," Giacomo said.

The main problem of the camp, according to another volunteer, Tamas, 27, from Hungary, is not the lack of water, nor a problem with the same repetitive diet, but that people have nothing to do. The boredom is suffocating. Refugees receive daily news about the situation via satellite television, which is broadcast in almost every container-house, and can sometimes talk with family members who have stayed ın Syria. "In the beginning it was difficult for the children to talk about topics other than the war,” Tamas said. “Here, everything that surrounds them is war. We must not forget that some children have been in the camp for more than a year. And during this time, every newcomer asks the same questions. Questions about the war, of course. But slowly these same children are now talking about football, music and other topics.. that´s great to see. "

Lıfe in the camp has resulted in a mix of creeds, religious groups and classes. People who would rarely cross paths are now neighbors and share the same hopes. “Only here we finally got to know each other. Here in the camp we are all the same. Nobody has money, nobody goes to private school, nobody has a car.” said Yussef, 11.

Some of the refugees themselves also do what they can to help the conflict. Primary school teacher Kader has organised a theater class with the children. Together, they re-enacted the story of the war, with characters including President Bashar Assad and the Free Syrian Army played by the children themselves. One child was particularly pleased to represent the international community, his role consisting of doing very little. China and Russia were equally well represented.

Some students from the University of Aleppo who have been forced to temporarily abandon their studies are planning to arrange music lessons inside the camp with the hope that they can give the children something to talk about other than war.