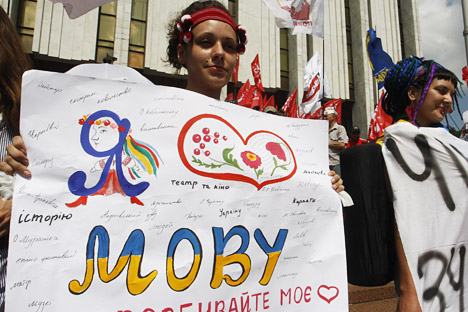 The recently adopted bill on Russian language fuelled debates within the Ukrainian community. Pictured: Protesters demonstrating against the language bill and chanting the slogan "I love the Ukrainian language." Source: ITAR-TASS

Although the Ukrainian parliament adopted the language bill and some regions started complying with it, President Viktor Yanukovich called for the bill to be reworked even as he signed it into law.

The Russian language has become official in Ukraine's Odessa Region today. This decision came in accordance with the recently adopted law on the Russian language which makes Russian one of the country’s official languages in nearly half the nation’s regions. Last week Ukrainian President Viktor Yanukovich signed the bill.

However, before signing the bill, Yanukovich said that the law needed to be reworked and amendments to it should be submitted to Ukraine’s parliament, the Supreme Rada before Sept. 27. Analysts believe the president’s move is related to upcoming parliamentary elections.

Photo of the day: Ukranian opposition opposes against Russian language

Yanukovich set forth his position on the law at a meeting in the Crimea on Aug. 7, in the midst of many supporters of the Ukrainian language.

Speaking before the president, Nikolai Zhulinsky, head of the Shevchenko Literary Institute, said: “I said that we should follow the experience of other countries and first pass a law on Ukrainian as the official state language and then consider the issue of other regional languages.”

Pavel Movchan, head of the Ukrainian Society Prosvita, said that he had alerted Yanukovich to “nine serious contradictions in the text of the law, including the choice of language for teaching in schools and universities.”

When Yanukovich took the floor, in a rather unexpected move, he agreed with much of the criticism and ordered a working group to be set up to eliminate the shortcomings in the language of the bill and to prepare amendments.

In his comments, Yanukovich reassured those who believe that the controversial law discriminates against the Ukrainian language. Former President Leonid Kravchuk, also speaking at the meeting, said that Yanukovich had instructed Prime Minister Nikolai Azarov to start work on a program to develop the Ukrainian language. Such an undertaking has not been attempted during the 20 years of the country’s independence, mainly due to financial reasons. “The president is in a decisive mood today,” Kravchuk said. Presidential aide Anna German explained that signing a law on the basic principles of the state language policy could itself “split Ukrainian society and do a lot of harm, while the implementation of the state program would fully eliminate that threat.”

Experts describe Yanukovich’s recent decision as “a political game,” pointing out that it is unlikely that the ruling Party of Regions drafted the law without the approval of the presidential administration. They attribute Yanukovich’s remarks in the Crimea to the need to score points with Ukrainian nationalists in the run-up to September’s parliamentary elections. “Viktor Yanukovich, who positions himself as the champion of the Russian-speaking population, has to deliver on at least some of his promises. On the other hand, he is rightly afraid to lose the votes of those who feel at least part Ukrainian,” said Ukrainian political scientist Vitaly Plotnikov, adding that even some Russian-speaking citizens were opposed to the law.

Plotnikov said that Yanukovich’s change in position could possibly backfire. “Anyone who becomes president of Ukraine is aware that the Ukrainian language is part of his legitimization. If this principle is renounced, the question will immediately arise as to why the Donetsk and Kharkov regions belong to our country. So Yanukovich has to somehow uphold state values,” Plotnikov said, otherwise Yanukovich would “cease being the president of all Ukrainians and would remain the head of the ‘Soviet-speaking’ citizens. And it’s a small step from there to Ukraine becoming a Russian province, a vassal of Moscow.”

This article is available in the original Russian in Kommersant.