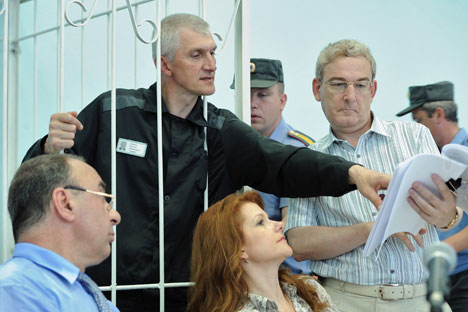 Mikhail Khodorkovsky’s partner, Platon Lebedev, convicted with the former Yukos CEO, had his prison term reduced by three years and four months under the liberalization of the criminal legislation introduced by then-President Dmitry Medvedev in 2011.

Although Legal changes result in more than 4,000 people being set free, including Platon Lebedev, the move doesn't resolve the basic problems of Russia's justice system.

There was a kind of breakthrough in the case of Mikhail Khodorkovsky last week. That day, the prison term for Khodorkovsky’s partner, Platon Lebedev, was reduced by three years and four months. Lebedev, who had been convicted with the former Yukos CEO, was resentenced under the liberalization of the criminal legislation introduced by then-President Dmitry Medvedev in 2011.

Platon Lebedev is a former chairman of the Board of Directors of the MENATEP Group and a senior manager of the Yukos Oil Company. In 2003, Lebedev was arrested on suspicion of fraud and two years later he was sentenced to eight years in prison along with former Yukos CEO Mikhail Khordorkovsky. In December 2010, his total prison term was increased to 14 years. The sentence was reviewed after the changes in the law were adopted. Platon Lebedev is set to be released in March 2013.

The legislative changes, which primarily affect financial crimes, were passed in 2011, and resulted in the review of sentences in a number of cases. According to data from the Supreme Court, 528 convicts were released because the actions they committed are not considered crimes under the new legislation and in addition, over 4,650 sentences were commuted. In March, the sentence of another of Khodorkovsky’s former partners, Vladimir Pereverzin, was reviewed and he was immediately released.

Despite these numbers, many have been disappointed in the results of the legislation. Lawmakers had assumed that the prosecutors responsible for bringing cases in the first place would supervise the review process, but this has not happened. "In our country if you’re drowning, you still remain on your own," said Lebedev’s attorney Vladimir Krasnov at Lebedev’s hearing, drawing the court’s attention to the fact that the process was initiated not by the prosecutor’s office, but by the defense team.

Attorney Konstantin Rivkin agrees that local courts receive numerous appeals to review sentences, but almost all of them come from prisoners and their attorneys, not the prosecutor’s office. And, according to Rivkin, the result of these reviews is often less than satisfactory: “It should be admitted that the Medvedev-initiated amendments greatly contributed to the humanization of the society. There were many appeals to courts from convicts and their attorneys to review the sentences. But in the majority of cases courts reduced the terms in prison by one to three months and not by a few years as they could have.”

According to the new legislation, first-time offenders convicted of tax-related crimes are released from criminal responsibility if they have compensated the budget for the inflicted damage in full. Those charged with illegal enterprise, deliberate and fraudulent bankruptcy, debt also have the same opportunity now. Additionally, a person who committed a minor offense without aggravating circumstances for the first time may not be sentenced to prison. And finally, a moratorium on arrest as a measure of restraint for the accused in financial crimes was introduced.

Defense attorneys also claim that the courts and prosecutor’s office find ways to get around the changes to the law. “Earlier, businessmen were often charged under the Fraud and Tax Evasion articles. According to the new code, they may not be arrested before the court hearing under these articles. Now, investigators find an insignificant additional component of the crime not related to the financial activity in the charged person’s actions and have him arrested till the court hearing on the basis of this component,” said a source from the law enforcement system, who preferred to remain anonymous.

Pavel Krasheninnikov, chairman of the State Duma Committee on Civil, Criminal, Arbitral and Procedural Legislation, said that the key task for the liberalization of the Criminal Code was to change the mindset of the court and law enforcement system representatives. “I am sure that the humanization of the Criminal Code has significantly influenced the mentality of law executors. They are people, too, and the amendments we are talking about, were taken with a wide public discussion. We should, however, admit that the Criminal Code humanization has not made a great impact yet as far as the results are concerned, but it is not over either,” Krasheninnikov said.

Khodorkovsky, Lebedev defense lawyers get Supreme Court confirmation their complaints will be investigated

Said Rivkin, “Considering the hierarchy of our court system headaches, the top problem is the issue of the law enforcement, or in the former judge of the Constitutional Court Tamara Morschakova’s apt words, law violation practice. The problem lies in the general accusatory character of our justice system. No humane amendments to the Criminal Code will work as they should until this problem is solved.”