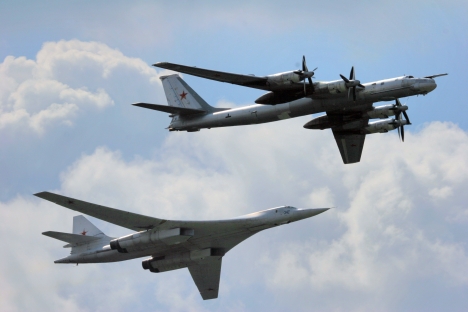 While new planes for the air force are still in development, the weaponry is already in place.

On the weekend of Aug. 11-12, a major air show was held near Moscow celebrating the 100th anniversary of the Russian Air Force. More than a 100 aircraft flew over Zhukovsky Airport, including the revamped Tu-160 strategic bombers, the multifunctional Sukhoi Prospective Airborne Complex of Frontline Aviation (PAK FA) T-50 fifth-generation jet fighter, the Su-34 fighter-bomber, modified SU-35 and MiG-35 fighters, the YaK-130 advanced jet trainer/light attack aircraft, and the Mi-28N and Ka-52 helicopters. Commander-in-Chief of the Air Force Viktor Bondarev promised that the armed forces would receive more than 180 new airplanes and helicopters by the end of the year, while President Vladimir Putin confirmed that there were plans to supply more than 600 new airplanes and over 1,000 helicopters to the Air Force by 2020.

Neither airplanes nor helicopters are capable of fighting on their own – they carry rockets, bombs, and missiles that must be delivered to their targets. Moreover, they must avoid enemy air defense facilities and remain undetected by enemy radar. This is only possible if the missiles have ranges exceeding 250-300 miles and travel at subsonic, supersonic speeds, or better still, hypersonic speeds, maneuvering and adjusting heights depending on the terrain.

The Russian Air Force possesses such missiles. These include two types of cruise missiles – the Kh-55 and Kh-555 for the Tu-95MS and Tu-160 strategic bombers developed by the Dubna-based MKB Raduga design bureau.

The former is capable of carrying a nuclear warhead, and the latter is designed for conventional warheads. Their range is similar to that of the U.S. AGM-86 and AGM-129 Tomahawk: up to 1,800 miles. The missiles are equipped with an autonomous guidance system capable of adjusting to the terrain – the map of the terrain is stored in an onboard computer. The control module also features counter-interception maneuvering capabilities.

The Kh-555 is a newer model with an additional guidance system – an optical-electronic adjustment system and satellite navigation. The Kh-55 allows a 300-foot deviation from the target center (which for a nuclear warhead is unessential), whereas for the Kh-555, the figure is 65 feet (the “bull’s eye” for a high-explosive or fragmentation warhead weighing 770-890 lbs).

Nevertheless, even these high-precision strategic cruise missiles fall short of the growing requirements of the military. First Deputy Defense Minister Alexander Sukhorukov told Moscow journalists at a recent news briefing that a new strategic long-range missile was under development, although he did not elaborate as to the characteristics of the new missile.

There is little information about it in the public media. It is known that specialists at the Raduga design bureau were working on a hypersonic strategic missile in the late 1980s. Its civilian equivalent, designed to explore outer space and displayed at international exhibitions, was codenamed Burlak. It was created under the guidance of Igor Seleznev, the chief designer and originator of the Kh-55. The project came to a halt in the early 1990s with the collapse of the Soviet Union and a lack of funding. But the developers may have dug up their old designs.

The media reported in 2010 that the Kh-101 missile had good prospects. Admittedly, to arm long-range aviation with the new missile, some changes will be required; specifically, the airborne guidance system of missile carrier aircraft will have to be replaced. Furthermore, the Tu-95MS bomber cannot hold the new missiles, which is why the Tu-95MS pictures that appeared in the Internet had Kh-101 missiles mounted on pylons under the wings, two on each pylon, making the total eight missiles.

It is impossible to say now what sort of features the new strategic missile will have. The idea that this will be the Kh-101 or the Kh-102, the conventional version, has not been confirmed yet. In the spring, Defense Minister Anatoly Serdyukov spoke about a new air-launched strategic cruise missile, which is already being delivered to the air force, so some of these missiles may already have been delivered to long-range aviation for tests and trials.