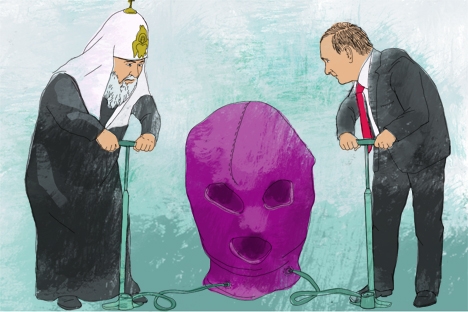 The Russian authorities have an exceptional talent for letting their mistakes be blown out of proportion.

After the inauguration of President Vladimir Putin, it seemed that the Russian opposition had disappeared into thin air with little chance of reappearing. No street protests had the potential to turn into serious political action and the opposition probably would have remained sidelined were it not for the show “Pussy Riot behind Bars.”

The Russian authorities have a nearly unparalleled knack for being unable to show properly what they do well, while letting examples of what they do badly be blown completely out of proportion – to the extent that not only the whole of Russia, but the entire world starts paying attention.

Any spin doctor with the most basic knowledge of publicity campaigns is perfectly aware of their elements. To engage artistic performances and culture for political causes is still a new trend, but there are still rules. The more fools there are among your enemies, the more efficient your trick will be; the harsher your enemy’s response, the more attention the most pointless act will enjoy, even if performed by utter morons. However, if attractive young mothers are engaged as the morons, the attention paid to your act will be almost limitless. The women behind the glass in Khamovniki Court fulfill all the stereotypes of members of a girl band – there is the experienced one, the clever one and the bombshell.

Try as they will, the Russian authorities will never manage to prove to the world that Pussy Riot can neither sing nor dance, and have no artistic value at all. All their attempts will be in vain. To the rest of the world, the band is the biggest act to come out of Russia since the Diaghilev seasons.

Pussy Riot may have no talent whatsoever, but the Russian authorities possess the exceptional talent of making something from nothing. No one else could have managed to create Russia’s most popular band at a time when the country is terribly short of heroes. Be assured that there are western producers falling all over themselves to help promote the group. The “Pussy Riot behind Bars” show is broadcast all over the world now, and the world isn’t willing to miss a tiny bit of it.

The funny thing is that the verdict announced on Aug. 17 could have been made months ago. They were sentenced to two years in prision. I wish they had been sentenced to community service, though – that would have been enough to satisfy the insulted citizens and churchgoers.

True believers couldn’t care less about Pussy Riot and, if they did, they would fight off this temptation. It was Jesus who said: “Love your enemies, bless those who curse you, do good to those who hate you, and pray for those who use you and persecute you.”

I wish the officials responsible for blowing up the story had resisted this temptation. I believe that three girls are incapable of ruining the Russian Orthodox Church and, if they are regarded as a threat to the church, maybe this is a problem with the church itself. Patriarch Kirill should consider addressing all people, irrespective of their religious beliefs and acts, and make people aware of the attitude of the church and its hierarchs towards the current developments. I do believe that the patriarch has sufficient speaking skills to shed light on the phenomenon and prevent immature minds from repeating such acts. To preach should be the main objective for a man who has chosen the burden of being a spiritual leader for vagabond souls. It would take one meeting, one conversation with the girls to put an end to this story. There is sympathy for those who try to understand and forgive, because everyone believes that the best is yet to come.