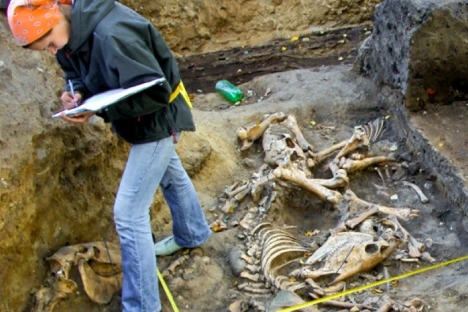 200 years after the battle, archeologists continue finding artifacts on the Borodino field.

A road leads from the center of the Moscow Region town of Mozhaisk, to Borodino Field. It is the road by which Russian troops first retreated and then advanced to take on Napoleon’s troops 200 years ago. Today, construction cranes are working at the approach to the legendary site reconstructing the imperial en route palace of Nicholas I, which was constructed to commemorate the 25th anniversary of the battle but demolished in the 20th century. Along with the building works, archeological digs are being conducted near the palace site.

The digs in Borodino go beyond the level of construction into the layers of cultural detrius, some of which dates from the time of Christ. Archaeologists have discovered that an early Iron Age culture settlement was located at this spot more than 2,000 years ago. Remnants of residences, ceramics and arrowheads from this settlement have been found.

But of course the site is preserved because of its significance in Russia’s war with Napoleon’s armies. The battle began to the west of the Borodino church, on a high bluff above the Koloch River. At dawn, this high point was attacked by the troops of Eugene de Beauharnais, the son of Empress Josephine from her first marriage. This sudden attack was a success, but soon the Russian artillery flung the enemy back to the river. About 800 French troops died in that first battle.

The Battle of Borodino itself is considered one of the bloodiest single-day battles in history. During the fighting, an average of 2,500 people died each hour on the Borodino field. According to varying estimates, between 80,000 – 105,000 people died, along with and 35,000 horses.

That fall, local farmers hired to work in funeral brigades received 50 kopecks a day – the same salary as a junior-ranking army officer – and two cups of vodka. At that time, an average apartment cost approximately 1 ruble a month and a pound of the best meat, 6 kopecks. Burials continued until May 1813.

Said archeologist Igor Kondratyev, taking part in the digs: “Nobody looked for these bones on purpose, although everybody knew that they are somewhere near here. An interesting thing: the Borodino Field was established as a field of combat glory in the 1830s. And it was the first field of combat glory in Europe. Along with a landscape, war graves should be a part of such memorial. But the Borodino field is full of monuments standing just on the land, not graves. Graves of common heroes have not been found yet. It is, however, known that there are up to 300 common graves. They were looked for, but only separate remains were found in small numbers and by accident. The common graves we have found in the basements of two burned houses are the first archeologically recorded find.

“It is strange that heroes remain forgotten for 200 years,” Kondratyev continued. “Those burials were considered temporary as the emperor ordered to bury bodies ‘till further order.’ For some people this order comes only now, 200 years later.”

In the middle of the 19th century, a garden with pavilions, flowerbeds and paths was established on the battleground the foreland. Its structure was also defined during the digs. Now, the garden has expanded and does not resemble a proper park, but the archaeologists have located some old trees that were likely the original ones planted and will be kept as the excavations and renovations continue.

Other finds are relevant to more recent history. Trenches and dugouts from 1941 have been found along with the bodies of two previously unknown soldiers. Locals identified the first one as a partisan who tried to blow up a bridge and was shot and buried near it. His body was found with a mine detonator, which gave further proof of his identity. The second one, an infantryman hit by a bomb fragment, was found at the depth of only half a meter. Along with the fragment, a Bronze Age arrowhead was found in his grave: mixed pages of history separated by thousands of years.

Near these bodies, a German field hospital and cemetery was discovered. Almost all of the 66 bodies of low-ranking German soldiers were identified using the hospital’s lists and medallions. Their remains have already been given to the German government to be returned to their relatives.