Russia – and its officials - still searching for its identity 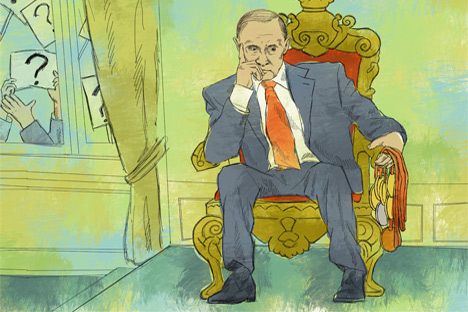 More than 100 days into his third presidency, Vladimir Putin has yet to propose a theme for Russia’s future development.

Countries, just like people, suffer from identity crises, which I would define as inability to fully comprehend their worldwide raison d'être (known, for example, in Russia as “the national idea”), their true values and aspirations, and, most importantly, their vision for the future. The identity crisis also often involves a gap between ordinary citizens and the country’s leadership as well as discontent between different social groups.

There is every reason to believe that a hundred-plus days into Vladimir Putin’s third presidency, Russia finds itself in the identity crisis of sorts. The situation was somewhat different even four years ago, when a young and energetic president, Dmitry Medvedev, began promoting his modernization agenda. Everyone would agree today that Medvedev’s attempts to reform the country’s outdated economic model and authoritarian political system did not yield much. Yet his efforts and, equally importantly, refreshing rhetoric helped usher in an image of Russia as a country aspiring to become better home for its own citizens, an image that was welcomed both in Russia and around the world.

Medvedev isn’t president anymore, but he’s still around and still pretends being a modernizer. These days, he runs a cabinet staffed with young technocrats with undeniably liberal credentials. The problem is that from the very beginning, Medvedev’s team has been suspiciously quiet, and its impact on the situation in the country is far from clear. The last thing I personally heard about the cabinet was the news that the government was spending $730,000 dollars on new furniture for the young modernizers’ offices.

Russians losing trust in president, according to polls

For his part, since his inauguration in May, President Putin has made no attempts to articulate any coherent strategic vision of the country’s future. Having tacitly rejected his predecessor’s idea of “modernization” and having completely exhausted his own promise of “stability” – the term he struggled to define during the last presidential campaign – Putin has offered virtually nothing in their place. The country’s problems are real – the economy is still humiliatingly dependent on oil prices and corruption is out of control – but the top Russian officials have spent the whole summer in a childish play of counting medals that Russia won or lost during the Olympic Games in London. It would appear that the only “national idea” the Russian political class can come up with would be winning the gold medal competition during the 2014 Winter Olympic Games in Sochi. Ah, by the way, the Sochi Olympiad is shaping up as the most expensive sports event in history; just don’t ask what all this money ($43 billion and counting) is going to buy.

And then, there was the verdict in the Pussy Riot case. It’s bad enough that a minor disturbance of public order has been allowed to reach the proportions of the major political and cultural event in the modern Russian history – all due to petty vindictiveness of Russia’s political and, much more disturbingly, spiritual leaders. It’s equally bad that at the time when unity must become Russia’s true “national idea,” yet another divisive factor that splits the country along ideological lines has been created out of nowhere – as if Russia hasn’t got plenty of those already. Worse, by igniting widespread protests and condemnations all around the world, Russia yet again lost the chance to define its identity on its own terms. Now, this will be done by others, and the Kremlin may not like the result.

One could argue, of course, that so far, the identity crisis hasn’t killed any single individual. Nor is there any history of countries collapsing under the weight of such a crisis. And this is true. Yet, identity crises must not be taken lightly, and the reason is simple: they are usually closely followed by other, much more damaging, crises.