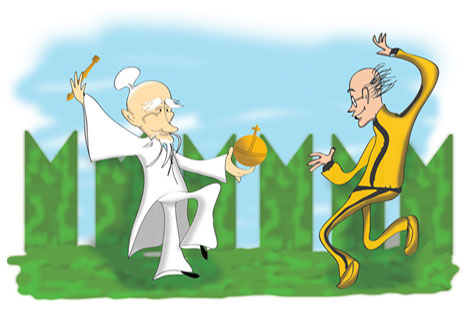 A utopian political experiment with an uneasy beginning and a happy ending. Fyodor Lukyanov takes a look at May 7, 2018.

On Monday, May 7, 2018, about one month before the opening of the World Cup Soccer Championship, a new President of Russia will be inaugurated in the Kremlin. Vladimir Putin, still an athletic man in his prime at 65 years of age, and not too much changed from when he came to power twenty years earlier, will hand the reins of power to his successor, this time leaving the political stage for good. In a two-hour interview with the four national TV networks, aired on the eve of the ceremony, Putin summed up the results of his years at the summit of Russian politics.

It was not without trepidation that he had made the decision to return in 2012. The decisive factor was the threat of a new world crisis, signs of which were visible on the horizon, and his desire to be at the helm himself in the event of a real storm. Things did not go too smoothly at the outset. Even his closest allies were offended at the way they had been informed of the impending switch of positions between the president and the prime minister, which was presented as a fait accompli at a congress of what was supposed to be the ruling party. The Duma elections were also less than perfect: Officials went overboard in an attempt to secure a reliable tool for the work ahead. These two developments combined to provoke an outbreak of unrest such as had not been seen before and that Putin had not expected. It should be noted that the opposition proved quite unable to exploit the awakened civic consciousness of the population, while the authorities took advantage of the turbulence to make some dramatic moves in the direction of self-revitalization. The powers that be replaced regional governors, brought new faces into the cabinet, started massive modernization projects in the real sector, continued privatization, made a breakthrough in attracting investment, and made progress on structural reforms that had been started back in 2000, but remained unfinished.

However, Russia did not manage to prepare properly for the upheavals that subsequently shook the world. A new global financial crisis broke out in 2013, touched off by Portugal’s sovereign default, and then Spain’s. The Iran War, however, kept oil prices high. Israel’s attack on Iran’s nuclear facilities, which the United States had to join despite newly re-elected President Barack Obama’s opposition to it, caused disarray throughout the oil-producing region from the Caspian to North Africa. Then the world economy really started to slide: China slumped, demand for raw materials fell, and Russian revenues tanked.

Putin realized that the crisis had opened up opportunities for a thorough-going reform of Russia and for repositioning the country internationally. He offered Europe very close cooperation. At the beginning of the 2000s, the European Union had still believed in its own fundamental superiority, and would not accept the idea of an asset exchange, uniting economic capabilities on a mutually beneficial basis, and combining Europe’s technological and social resources with Russia’s financial ones and raw materials. In the middle of the second decade of the century, the leading European capitals sat down in earnest at the negotiating table with Moscow in order to save their economies. It turned out that the eternal question of visa-free travel could be solved within two months – when there was enough motivation – and the seemingly fatal problems of Russia’s investment climate and access to European assets for Russian investors were not problems at all. When the Eurasian Union began to function in 2015, it was no longer seen as an affront to the European Union, but as its natural extension.

Things were more difficult with China. The prospect of dependency on Russia’s rapidly developing neighbor had always troubled Putin, although he missed no chance to play the China card in order to remind the West that Russia had other options in choosing partners. The crisis, which coincided with conflicts within the Chinese leadership, opened up an unexpected opportunity. Beijing was at a loss in the face of the combination of adverse domestic and external factors, whereupon Moscow offered a massive program of economic cooperation on new development plans for Siberia and the Far East. The prospect of a Russian-Chinese rapprochement alarmed Washington and Tokyo, making them finally understand that they had to take the Russian factor into account in the complex Asian context. In 2011-2012 the American strategists could not see Russia right under their noses, as they pushed ahead with preparing beachheads for a build-up of the U.S. presence in the Asia-Pacific Region. Two or three years later, however, the situation had changed, and something like a competition for Moscow’s favor unfolded, although the territorial dispute with Japan remained unsettled and there were still numerous unresolved issues with the United States.

While Russia and the U.S. were unable to overcome the inertia of their former standoff in the Euro-Atlantic region, absurd as it was for this to persist in the 21st century, things were able to move ahead in the Pacific Rim without such baggage. And the shift of the focus of attention to the Pacific began gradually to transform Russian-American relations in a more up-to-date and reasonable direction. This process was aided by the fact that, by the mid-2010s, Washington really began to grasp the necessity of revising its global strategy in light of scarce resources. Even the 2016 electoral victory of a hard-core conservative did not change this attitude: finally, the United States got to work on its own domestic problems, rather than trying to fit the rest of the world to its own requirements. The chaos in the Middle East, demonstrating that all attempts at crisis-management had been in vain, only served to confirm the need for a strategic review.

Thus, Vladimir Putin was passing to his successor a Russia that was already standing firmly on its own two feet. The young and ambitious successor, with a fair amount of experience under his belt already, had first come into the public eye in May 2012, when Putin announced a radical facelift for the cabinet. In 2017, the future successor became prime minister. Putin was leaving him a country that had not only survived the powerful blow of the latest crisis, but also had used it to achieve steady integration with the leading economic and political zones of Europe, Asia, and America. Though still burdened with a fair number of problems, the country could look ahead to seek solutions, rather than backwards to its identity as a defunct superpower. And Putin was sure that the state was on the right path now. Now he could calmly pass on the trappings of supreme power and turn to his favorite activity — rooting for our team. It wasn’t for nothing that, way back in 2010, soccer boss Sergei Fursenko had promised that the national team would win the championship when Russia hosted the World Cup.