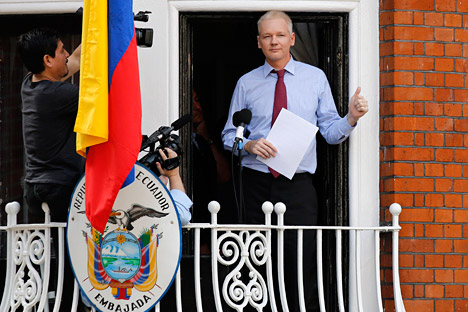 The Russian Foreign Ministry is puzzled by the decision of the British Foreign Ministry to deny WikiLeaks founder Julian Assange his right to political asylum – especially considering that London previously turned down Moscow’s requests for extradition of some high-profile figures.

On Aug. 16, Ecuadorean Foreign Minister Ricardo Patino said that his country would grant Assange political asylum. The British authorities claim that, despite this decision, they have plans to arrest Assange and extradite him to Sweden. Assange has been living in the Ecuadorean embassy in London since June.

“It is known that dozens of suspects of grave crimes have found refuge and feel safe in the UK, despite demands for extradition, including from Russia. What about Assange’s right to asylum, considering that London absolutizes this right when it comes to anyone else in this category?” said Foreign Ministry spokeswoman Maria Zakharova in a statement.

Specifically, Moscow is seeking extradition of businessman Boris Berezovsky, who moved to the UK in 2000. In 2003, a British court refused to extradite him at the demand of the Russian General Prosecutor’s Office. Instead, Berezovsky was granted refugee status in the UK. Meanwhile, back in Russia, Berezovsky was twice tried in absentia and found guilty of fraud, embezzlement and laundering corporate money from AvtoVAZ, LogoVAZ and Aeroflot. At the end of these trials, he was sentenced to 13 years and six years in prison. Russian Prosecutor General Yury Chaika has previously said that Russia would continue its efforts to seek Berezovsky’s extradition.

Zakharova also said that the situation was a reason to think about “observance of the spirit and the letter of the Vienna Convention on Diplomatic Relations, specifically Article 22 spelling out the inviolability of diplomatic premises.”

In mid-June, Julian Assange, a 41-year-old Australian, requested political asylum at the Ecuador Embassy in London. He is wanted for questioning in Sweden on allegations of rape and sexual abuse dating fro August 2010. In November 2010, Sweden put Assange on the international most wanted list; he was detained in London in December 2010.

Sweden has not brought any formal charges against Assange, but he was convicted in the UK for failing to give testimony to the Swedish police and leaving the country. Assange appealed the decision, but lost at every level, including Britain’s High Court.

Assange is best known as the founder of WikiLeaks, which has made public tens of thousands of documents about the activities of the U.S. military in Iraq and Afghanistan as well as confidential U.S. diplomatic cables.