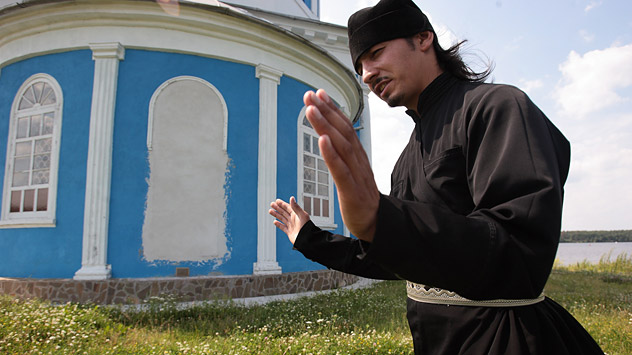 Elizbar Ivanov broke with the traditions of his gypsy family to become a deacon in the Russian Orthodox Church; Ivanov's example has led others to convert. Source: Sergey Kaptilkin.

Gypsy Elizbar Ivanov went against his family and became a deacon in the Russian Orthodox Church. Eventually they gave up drug trafficking and followed his example.

When Rev. Elizbar Ivanov was known simply as Edik, the town of Kimry in Tverskaya oblast had a reputation for being the heroin capital of Central Russia. Commuter trains from Moscow were nicknamed “green needles” (in reference to their color) and regular passengers avoided the end carriages, which was the exclusive domain of drug addicts. Every junky within a 200 mile radius would come for cheap heroin here, to the Savyolovo station, or, more accurately, to the local gypsy settlement dubbed Hollywood. Local teens soon cottoned on to the situation and, before long, it was impossible to find a single youngster in the town that wasn’t under the influence.

“To tell you the truth, going to church was like going to a jewelry store,” Ivanov said. “I wanted to wear a cross around my neck, but you cannot wear one unless you are baptized. And you know what? I still cannot understand what happened to me then; it wasn’t as if the priest said any memorable words. But two days later, I gave up drinking. Two days after that, I stopped smoking, and a lot of other stuff besides. A month later, I was coming to every single service.”

Fr. Andrei, rector of the Transfiguration Cathedral, first thought the young man was some kind of secret agent. Why else would a 17-year-old gypsy hang around after every service asking questions about spiritual life? Such commitment is a rare thing even for Russians, let alone gypsies. “You’d better read the New Testament, and the Acts of the Apostles,” Fr. Andrei replied, when he realized the boy was getting serious about the church. “I certainly will, father,” Ivanov replied. “Let me just learn to read, and I will.”

It turned out that Ivanov – like most local gypsies – had not had a single day of schooling in his life. And so he set about reading the New Testament in Old Church Slavonic, an ancient form of Russian that is still the language of Russian Orthodox texts. The edition was supplemented with a brief guide to the language. After that, he proceeded to the Book of Psalms. A few months later, he went to see Fr. Andrei. He was by now a rather unique entity: someone who understood the language of the earliest Russian Christians better than he did the speeches of political leaders like Vladimir Putin or Dmitry Medvedev.

“The most difficult thing wasn’t even learning to read and write,” Ivanov said. “You know what the most difficult thing for me was? To give up dancing. I was a very good dancer, both in the Russian and the gypsy style. In nightclubs, everyone would be cheering me to carry on when I stopped. I haven’t danced for seven years now, and I miss it immensely. Sometimes I dance in my dreams, and they are so real that even my muscles ache when I wake up.

“A gypsy’s only faith is superstition.”

Down in the gypsy settlement, however, the mysterious shift in Ivanov’s soul was flatly dismissed. He himself describes what followed half-seriously, half-jokingly, as “persecution.”

“‘You are a disgrace to us all!’ is the kindest thing I heard,” Ivanov said. “In a fit of anger, my mother promised to hang all priests. My stepfather egged her on. My siblings didn’t say anything: they were a bit afraid since I was the oldest.”

Russian gypsies are considered Christians, but as Ivanov explained,  “As a rule, the Romani people identify themselves with the religion they see around them. But we mostly have only one religion, and I don’t even know what to call it. Gypsies are the greatest believers in superstitions. They believe in everything – and in nothing. They are ready to observe all kinds of rites, but not out of love – out of fear. They turn any religion into paganism. They don’t know prayer. For them, praying is akin to witchcraft.”

After Ivanov began spending a lot of time in church, everything that went wrong for his family was blamed on him. If anyone was taken ill or died, jailed or got hooked on heroin; if anyone crashed their car or gambled their money away, the response was always: “It’s you - you’ve brought a curse to our family.”

Ivanov found a way to practice his faith out of the prying eyes of his family. “We don’t have running water at home, but we do have a big water tank in the attic. Water has to be pumped into it every day so that it would go down into the bathroom. I volunteered to be the one that pumped the water. I hung icons in the attic and prayed while the pump was working. It was a good system, and it worked for several years until some neighbors spotted me and came to my house to tell me off. They were sure that my ‘sorcery’ was a public matter, since it was hurting not only my family, but the whole camp.”

“I drove junkies away with a club.”

The last straw for the camp was when Ivanov, with Fr. Andrei’s blessing, took a stand against the gypsies’ main business – drug trafficking.

“When I have the father’s blessing, I am not afraid of anyone, be they my family or foreigners,” Ivanov said. “So, at some point, I shook away all my fears. I grabbed a club, and I just beat the junkies off our gate.”

He eventually led his family to extreme poverty. His stepfather took a job at a construction site, and his mother started breeding pigs. The family shifted from the drug business to buying up scrap metal. His family did not react very well to this chain of events. At one point, Ivanov only went home to sleep. He prayed wherever he could find a place.

“I noticed once that, when the cathedral was closed, he went to a nearby park and spent hours kneeling there, even in winter,” Fr. Andrei said. “I told him then: ‘You’ll freeze to death out here! Come to my place, I will give you a room to pray.’ So he started spending a lot of time at our place. At that time, we were showing a drug education movie in schools, and Edik was eager to join the cause. Last Easter, he even took part in the Procession of the Cross around the gypsy settlement.”

Ivanov remembers the day well: “When they saw a crowd with religious banners, police and even a fire engine approaching the camp, our folks thought they were coming for them. The coolest gypsy guys jumped into their cars and raced away, while the simpler folk just hid inside and pushed their women and kids out as cover. When they realized, though, that we had come in peace, they went wild with joy, swarmed into the street, and even applauded Fr. Andrei saying ‘Christ is risen!’ They eyed me suspiciously, though, but that’s ok.”

“Romani, we will build our own temple!”

Ivanov was so wrapped up in his relationship with the Lord that he barely even noticed Lyudmila’s wily grandmother who, upon seeing him in the street, would start complaining that she was getting so old she was afraid she would never see her granddaughter marry, and was praying for a good grandson-in-law.

Ivanov and Lyudmila were married six months after their first date. It did not go down well with the gypsy family at first. Only two women from Ivanov’s large family attended their nuptials: his sister and his cousin. They are both in prison now. Soon, however, the family had a change of heart. As it turns out, Lyudmila, although an ethnic Russian, looked very much like a gypsy herself. Ivanov’s family has not yet visited their home, but when he and Lyudmila come to visit them, they are always hospitable and cordial.

“They just don’t like seeing me in a cassock,” Ivanov said. “They are very much afraid of such things. For gypsies, a priest is someone who deals with the dead. And our people are very fearful of the dead. Touching a dead body is considered to be desecration. It’s something Old Testament-like. I tell them: ‘It’s ok, get used to it. Do you think I’m the only gypsy priest there will ever be? Not even close! We will build our own church, you’ll see!’ My mom was baptized recently. She did it in secret, just like I did. My second cousin, just a short while ago, he brought his kids to me to get baptized. He’s stopped selling heroin and lays asphalt for a living now.

Ivanov says he is happy with his role as a deacon and doesn’t plan to become a priest.

“You see, in liturgy, a priest symbolizes Jesus Christ, and a deacon – merely an angel. I don’t think I can even be worthy enough to be the image of the Savior, not now, not in the future. What’s more, the deacon has a different task. The priest gives a message to the service; the deacon makes it beautiful. It’s like dancing, don’t you see? I wanted to dance – so I’m dancing,” Ivanov said.

“There is nothing surprising in this story,” said Fr. Alexander. “I grew up close to gypsies, and I know the people pretty well. They are tainted with a lot of vices, but they have one very important merit: They are open, sincere, and ingenuous. They are open-hearted in vice or virtue – depending on where to guide them. The New Testament says: ‘Unless you change and become like little children, you will never enter the kingdom of heaven.’ Gypsies are exactly this kind of evangelical children. They are vagrant children, for the time being, but I will not be surprised to see them setting an example of piousness for us in 50 years. There have been many such cases in the history of Christianity.”