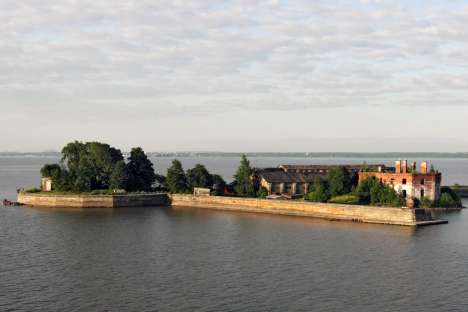 Fort Citadele was build in 1721-24; now it's one of the abandoned forts in the Gulf of Finland. Source: ITAR TASS.

Once the proud protectors of St. Petersburg against its enemies, the forts are today all but forgotten.

If you pass the necklace of forts of Kronstadt Harbor today, you will see apparitions of the past, once-mighty fortresses being laid claim by the sea. Yet it is fascinating to observe these stone behemoths, and to imagine the empire they once served.

Saint Petersburg’s world-known, sumptuous palaces and parks were once well protected by the forts. For almost three centuries, situated in a row across the Gulf of Finland, they bravely served as the guarantors of the splendid city safety from the sea. Along with the batteries on Kotlin Island, they constituted the strongest fortress of the Baltic Sea – Kronstadt.

Created by eminent masters but with the hands of workmen, these fortifications kept the hostile armadas at bay: Kronshlot, Citadele, Risbank (Pavel), Aleksander (Chumnoi), Knyaz Menshikov, Totleben, Shants, Krasnaya Gorka, Ino and many other wonderful forts are part of Kronstadt’s stone and concrete necklace. They were, and still are, the grandest artificial creations on water and land.

The Gulf of Finland’s narrow navigable channel stretches in the shallow water not far from Kotlin Island, where Tsar Peter I was reassured when he measured the depths. Here the Gulf is as narrow as 9 miles, with the island (slightly more than 1.2 miles wide and 7 miles long) like a cork, creating obstacles for the enemy on his way to Saint Petersburg. Peter I created a wooden model of the future fortress . By the end of 1703, he ordered the first fort, which was called Kronshlot.

The builders of the fort copied the Arkhangelsk coast-dwellers: in winter they put wooden blockhouses (the so-called ryazhi) on ice and filled them with stones from the inside. As the ice was melting, the ryazh moved down to the bottom of the gulf, creating an island. Even thought the builders were stressed for time and the working conditions were tough, the fort was finished by the spring of 1704. The fort, fitted with a military garrison and a dozen of cannons, faced two attacks of Swedish squadrons later the very same year.

Peter I was so confident that the forts he was building were impossible to conquer that once he even invited the Swedish ambassador to have a look at the constructions they built so that the enemy could see that all the attempts to seize Saint Petersburg from the sea would be a failure. Some time after that the Treaty of Nystad was signed, thus ending the 20-year long Northern war.

Kronshlot was strengthened and by May 1724 it had a harbor with gates, protected walls that were equipped with inner parapets and batteries. The number of cannons reached 106. Then the fort’s walls were covered with granite and in 1803 the gunpowder room was established.

Kronshlot had to face not only enemy’s attacks but powerful natural disasters. For instance, in 1824 during the flood the water line reached 11 feet above normal. The tempest was so strong that it destroyed some bastions and pulled quite a few cannons into the sea.

However by the beginning of the 20th century the forts would begin to lose significance in terms of defense, as high-explosive shells could suddenly destroy the thick walls.

St. Petersburg: A cultural blast from the imperial past

The spectacular Fort Alexander was built to defend the southern fairway from hostile ships. Its construction was launched in 1836 after Nicholas I approved the plan. The stones for the fort were squared according to a special mold, giving them a distinctive double curve in both directions; the parabolic shape prevented water from reaching the walls when the sea was stormy.

The Alexander Fort took nine years to build. It was opened with a formal ceremony only in 1845 with Tsar Nicholas I as master of ceremonies. The construction of this fort became an example for all the Russian engineers, as well as for the well-known Fort Boyard in France and several forts in America.

But by the turn of the century, these forts were already obsolete for naval defense. In 1897, the St. Petersburg Institute of Experimental Medicine transformed the fort into a laboratory to research the plague. Here they created vaccines against the epidemics of plague, typhus and cholera that were spreading at that time.

During the 1920s, the fort was used as a depot for mine equipment and it was not until the early 1980s that the explosive materials were entirely cleared. At that time they started building a complex of anti-flood constructions. In the wild 1990s, Fort Alexander was a place for private parties, raves and discos.

No one guards the forts anymore. Everything that was at least slightly valuable was stolen or damaged by thieves. Today the forts are sad testaments to a kind of indifference to history. The signs of the Russian Navy former glory are dying in the leaden waves of the Baltic Sea. With a silent reproach, these historical and cultural monuments are observing the cruise liners passing by the Kronstadt harbor.

This article has been abridged from the original Russian version, which is available in Russian in Travel.ria.