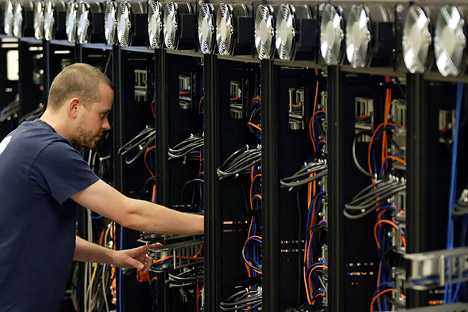 The supercomputer will be constructed at the laboratories of the Russian Academy of Sciences. Similar models are already operating in the US and Japan. Source: AP.

New system will vault Russia into the ranks of countries with the world’s most powerful computing systems.

The Russian Academy of Sciences (RAS) has announced that it has begun development of the most powerful computer system in Russia. The system will have a capacity of 10 petaflops. One petaflop corresponds to 1 quadrillion calculations per second. The first two elements of the system (2 petaflops) will be installed by the end of the year. Even before its completion, the new supercomputer will surpass the current most powerful computer in Russia, the Lomonosov, which today has the highest capacity of 1.7 petaflops. The supercomputer is expected to cost a total of around 2 billion rubles ($63 million).

“It is the beginning of the era of 10-petaflops computers. We are absorbing and utilizing the technology. Our goal is to complete the first two elements by the end of the year, and then the technology will make it possible to upgrade its capacity to 10 petaflops within a reasonable time – over the next year – provided there is adequate investment,” said Boris Shabanov, deputy director of the Joint Supercomputer Center of the Russian Academy of Sciences.

If such a computer could be completed now, it would be one of the three most powerful computers in the world, but by the time it is expected to be completed, it will most likely only rank among the top 10. On the other hand, the computer will be one of the most energy efficient machines in the world – it will lay claim to the second place in the Green 500 supercomputer rating, which evaluates computers by the amount of power they require to perform a certain set of calculations. The leader in this rating is BlueGene/Q by IBM.

“Energy efficiency is the distinctive feature of this new computer,” said Shabanov. “It is achieved with the help of the unique cooling system and cutting-edge x86 coprocessors.” Shabanov says that the director of the Joint Supercomputer Center, Gennady Savin has negotiated the supply of these cutting-edge coprocessors directly with the top management of one of the major microchip manufacturers.

Moscow State University is also about to join the supercomputer race. Andrei Mitrofanov, PR manager of T-Platform said: “We are developing a similar 10-petaflops project for the Moscow State University – it’s a conceptually new system with water cooling. It is expected to be complete in 2013-2014. So it’s possible that the RAS will have the most powerful computer – depending on when they complete it.”

Technically, this goal has been achieved: for example, the Lomonosov supercomputer ranked 13th among the 500 most powerful publicly known computer systems in the world.

But experts question the assumption that supercomputers designed to rank high in ratings can actually contribute to solution of important strategic problems in Russia. Leonid Chernyak, editor of the Otkrytye Sistemy (Open Systems) magazine believes that such computers are often built only to set a new computing capacity record and to give a reason to announce a new achievement. Chernyak explained that a supercomputer solves a problem by breaking it into many small calculations, and it is not the number of these smaller calculations that the main problem is broken into that matters, but the way it is done. Very often such computers can demonstrate their high performance in solution of only one problem – passing the performance measurement test with the Linpack software used for the top 500 supercomputers rating.

“As a result, it turns out that there are no actual problems what would utilize that maximum capacity. A supercomputer would run a great number of small calculations which can be done with smaller computers,” Chernyak said.

Users of Russia’s supercomputers disagree with this position and believe that these systems are useful for the purposes of science, industry and for the country as a whole.

“Calculations made with the Lomonosov were used in four successful doctorate and over 40 candidate theses. Each of these works is a fundamental achievement,” said Vladimir Voevodin, deputy director of the Research Computing Center at Moscow State University. “Important calculations have been made for many practical purposes – for example, in ecology we have made calculations relating to the status of permafrost in different scenarios of human influence for the next 50—100 years. The computer has been used in development of new materials.”

Voevodin says that over 600 teams are working at the Research Computing Center at university today.

The article is abridged and first published in Izvestia newspaper.