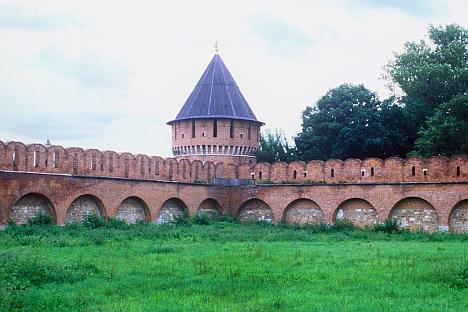 The city of Tula is identified with three things: samovars, gingerbread and guns.

No Russian city is more defined by what it makes than Tula. If Magnitogorsk means steel, Tula means samovars, gingerbread—and guns.  Many historians claim that Tula was Russia’s first industrial center, beginning with its role as producer of armaments in the 17th century.

Located about 120 miles due south of Moscow, the historic center of Tula is bounded to the north by the small Upa River (a tributary of the Oka) near its confluence with the even smaller Tulitsa River. The earliest reference to the town in medieval documents is under the year 1146--a year before the first reference to Moscow.

In this early period, the town was at the northeast limits of the principality of Chernigov. However, Chernigov was distant (it is located some 400 miles to the southwest in contemporary Ukraine), and the exposed location made Tula an ideal target for the princes of Ryazan, who held it in the early 13th century. After the Tatar invasion (1237-40), Tula was included in the domains of the Golden Horde, although still within the control of the Ryazan princes. In the 1430s, the town was briefly a part of the Grand Duchy of Lithuania. Thereafter, Tula moved into Muscovy’s orbit, initially during the rein of Basil II (r. 1425-62) and then firmly during the reign of Basil III (r. 1505-33).

Basil III understood the strategic significance of Tula as a defensive outpost against Moscow’s most dangerous enemy, the Khanate of Crimea. As in other towns to the south of Moscow, such as Kolomna, Basil initiated the construction of a brick kremlin, completed in 1520. During the 16th century, the fortress proved its worth against the Tatars, although the town itself experienced a number of devastating raids. As a result, it became a center of a southern chain of fortified settlements known as the zasechania cherta.

Ironically, the Tula fortress was also used against state authority during the Time of Troubles, a decade of social and political conflict between the death of Tsar Boris Godunov, in 1605, and the establishment of the Romanov dynasty in 1613. In May 1607, the town became a rallying point of rebels from several oppressed groups under the leadership of Ivan Bolotnikov. For four months, the rebels resisted the forces of Tsar Vasily Shuisky (1552-1612) until their surrender on Oct.10. Bolotnikov was executed in 1608, but his resistance became a legend in Soviet history. Shuisky was himself deposed in 1610. 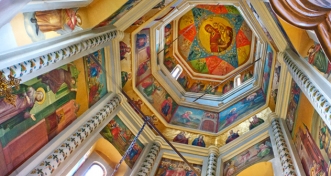 Although Tula’s kremlin was not as impressive as that of Kolomna or Smolensk, it has been relatively well preserved and today functions as an important museum in the center of the city. The fortress is dominated by the Cathedral of the Dormition of the Virgin, a large five-domed structure. Although the cathedral was built in 1762-64, its ornamental brick facades resemble the "Moscow baroque" style of the late 17th century. In 1765-67 the cathedral interior was painted with frescoes that are among the best examples of 18th-century monumental church art in Russia.

During the 17th century, Tula became a center of metalworking and armaments production, as small operations drawn from local iron deposits coalesced into larger units. A major step in this process occured in 1632, when Andreas Winius (1605-62), an entrepreneur of Dutch origins, established the first modern metal working plant in Tula. His son—also Andreas—became a close associate of Peter the Great, and in 1712, Peter founded the State Armory in Tula, which became a primary supplier for the Russian army.

Despite its role as an arms producer, Tula for the general public is associated with samovars. The first documented production of samovars began in the 1770s at a family workshop belonging to Fyodor Lisitsyn, a worker at the Tula armory. His sons continued the business, and by the 19th century Tula samovars from several factories were sold throughout Russia.

With the increasing diversification of its factories during the late 18th and 19th centuries, Tula acquired the architectural trappings of a regional administrative center. Its houses, churches, schools and commercial buildings displayed the neoclassical style promulgated throughout the Russian empire. In 1779, Tula acquired its first regular city plan, attributed to Andrei Kvasov as part of a general redesign of provincial towns during the reign of Catherine the Great. In 1824, the architect William Hastie provided the enlarged town with a new plan, elements of which survive to this day.

The size of Tula’s work force grew rapidly with the insatiable demand for armaments during the Russo-Japanese War and the First World War. Following the overthrow of the Romanov dynasty in 1917, the city’s factories were seen as an essential asset for the Bolsheviks during the Russian civil war and afterwards.

The most heroic page in Tula’s history occurred in Fall 1941, when units of the Red Army and workers’ militia successfully defended the city from near encirclement by German forces, including a tank army commanded by Hans Guderian. During those desperate months, the defense of Tula was a rallying point in the Soviet victory at the gates of Moscow.

Today Tula remains an important administrative, cultural and industrial center. After a decline in the 1990s, the city’s population has stabilized at the half-million mark. Tula’s popular museums devoted to samovars, gingerbread and armaments are complemented by a distinguished art museum, whose displays range from icons and applied art to modern painting. The city’s history and architectural monuments make Tula an interesting stop for visitors on their way to the estate of Leo Tolstoy at Yasnaya Polyana, about 8 miles away.