Russia to develop an a new air-cushion icebreaker 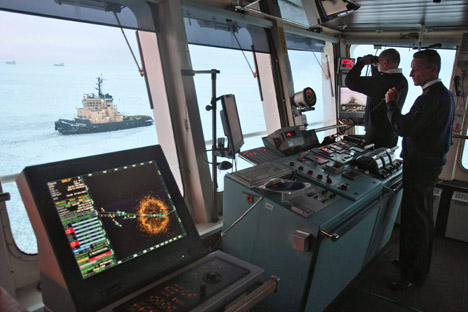 The air-cushion icebreaker should assist in the construction of shallow-water oil and gas platforms in the Kara Sea, the Gulf of Ob and the Caspian Sea. Source: RIA Novosti / Vadim Zhernov

A project halted under Perestroika has been resumed.

Russia’s Ministry of Industry and Trade has resumed the development and production of a new type of icebreaker: the air-cushion icebreaker. This vessel type was under development in the USSR in the 1980s, but the project was later halted. The new icebreaker model should assist in the construction of shallow-water oil and gas platforms in the Kara Sea, the Gulf of Ob and the Caspian Sea. The project is a part of a larger program to design equipment for hydrocarbon resource development on the continental shelf.

According to Valery Zuev, founder and designer of the Soviet icebreaker program and departmental head at the Alekseev Nizhny Novgorod State Technical University, this icebreaker’s prototype was ready in the Perestroika period. “I worked on this project and I am now preparing to return to it again. I can explain its operating principle in a simple example. Imagine the water covered with ice. How can it be destroyed with no force applied? If some water is pumped from under the ice, an air cavity appears between ice and water. The water does not support the ice cover any more and it starts breaking on its own.”

An icebreaker does not pump water from under the ice. The base of the icebreaker, or its ‘cushion’, has a compression plant, which pumps the air under the ice through its flaws. The ice then loses the support of the water below, via the air pocket, and starts self-destructing under the icebreaker’s weight.

Breaking into the Arctic with new ship technology

Clearing the way for cars, tanks, planes... and caviar

The Ministry of Industry and Trade has budgeted nearly 90 million rubles over two years for the prototyping, development, and testing of the air-cushion icebreaker. The new vessel is planned to stand at 17 meters long, 20 meters wide and about 320 tons heavy. According to Zuev’s estimates, the icebreaker will cost about 45 million rubles. At around 3 billion rubles, modern icebreakers such as Moskva and Sankt-Peterburg cost more. “It will be a crucially new type of icebreaker. Nuclear-powered icebreakers are used to provide navigation channels in the Northern Sea Route and thus have absolutely different capacities and aims. Our vessel is limited in its ice-breaking capacity: it can smash up to 1.5-meter thick ice... Probably, this parameter will be improved in the future,” Zuev explains. The designer also added that the icebreaker can be used on the Volga River. This waterway may become an international channel if the vessel-traffic schedule can be maintained.

Zuev points to oil- and gas-extraction companies, shipping and trade companies and uniformed departments as potential buyers for his new icebreaker. Still, there is a sense of caution and, perhaps, hesitation in the private-sector, when it comes to endorsing Zuev’s design. “The ice covering the inner waters of Russia has become increasingly commonplace recently. At present, there are different types of icebreakers available: diesel and nuclear-powered, river and sea ones,” says Nikolai Smirnov, vice-president of the Association of Shipping Companies. “To make any conclusions, we have to see a new vessel in operation. We always welcome new ideas if they work,” he asserts.

The United Shipbuilding Corporation has been cool to Zuev’s project, as well. The corporation's official representative, Aleksey Kravchenko, says, “The icebreaker’s purpose is to smash ice. The idea of an air-cushion vessel is to reduce the contact with the surface and it is not the best option for breaking ice. Russia has always been a leader in building icebreakers. And now considerable attention is paid to inner waterways. However, the final decision whether a system would work or not can be made only after its prototype is produced.”

Original text in Russian is available at Izvestia.ru website.