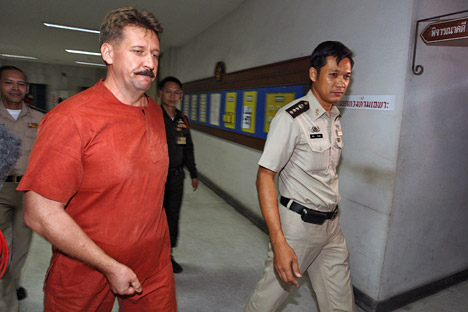 The court sentenced Victor Bout to 25 years in prison and a $15-million fine on April 6, 2012. Source: Kommersant.

The Russian Ministry of Justice has asked the United States to allow Bout to serve his sentence in Russia.

The Russian Ministry of Justice has officially requested the extradition of Russian businessman Viktor Bout from the United States. Bout was sentenced in the U.S. to 25 years in prison for intent to sell a shipment of arms to rebels of the Revolutionary Armed Forces of Columbia (FARC). The Russian authorities now propose that Bout serve out the remainder of his sentence in Russia.

According to Bout's wife, Alla, she approached the Russian Ministry of Justice in late July with a request for the handover of her husband from the U.S. to Russia. “That was the official start of the procedure to secure my husband’s extradition,” she explains. “The Ministry of Justice then made a formal appeal to its U.S. counterparts, and through Russia’s Foreign Ministry the request made its way to the Russian Embassy in Washington.”

Before dispatching the document to the U.S. Department of Justice, the consul secured an agreement with Bout himself. “It was a formality,” says his wife. “My husband gave his consent, adding that he would like to leave the U.S. as soon as possible.”

As clarified by the Russian Ministry of Justice, the handover of Bout to Russia could be achieved under the Council of Europe’s Convention on the Transfer of Sentenced Persons, adopted in 1983. “The extradition of a Russian citizen requires a tripartite agreement between the sentencing country, the receiving country, and the prisoner,” notes the Department.

In April 2012, a federal court in New York sentenced Bout to 25 years in prison. A Russian citizen, Bout was convicted of intent to supply weapons to the radical leftist group FARC, which is listed by the U.S. as a terrorist organization. However, Russia considers neither the charges against Bout nor his conviction to be fair.

In May, the Plenum of the Supreme Court of the Russian Federation considered a draft resolution on the issue of extradition. The intention was to establish a common practice that courts would pursue under Russian and international law in cases of extradition, the transfer of persons for criminal prosecution, and enforcement of punishment. One clause of the resolution relates directly to the Bout affair, because it implies that Russian citizens could be allowed to serve their sentences in Russia. Moreover, once in Russia, extradited persons will remain convicted, even if the two sides differ in the interpretation of the alleged offenses.

Victor Bout was born to Russian parents in Tajikistan in 1967. He attended the Soviet Military Institute for Foreign Languages in Moscow and ultimately learned to speak six languages fluently. According to some accounts, Bout worked for the K.G.B. in Angola when the Soviet Union dissolved in 1991.

In an interview with The New York Times in 2003, he told the reporter he had never been with the K.G.B. and that his mother cried when she heard those reports. Bout also explains his business to reporters as air-freight and cargo operations.

The Council of Europe's Convention on the Transfer of Sentenced Persons has been used only once before. In late 2008, former senior UN official Vladimir Kuznetsov, sentenced to 4.4 years for money laundering in the U.S., was handed over to serve his term in Russia.

Meanwhile, Bout’s attorney, Viktor Burobin, has made it clear that they stand ready to withdraw the application filed with the U.S. Court of Appeals. “If we get a guarantee that the U.S. authorities are ready to extradite Bout to Russia, we are prepared to withdraw our appeal,” he stated.

Mr Burobin also clarified that should his client be returned to his homeland, Russia will recognize both the crime for which Bout was convicted in the U.S. and the sentence handed down by the U.S. federal court. The 1983 Convention stipulates that the receiving country must not relax the punishment. “He cannot, for example, be pardoned unilaterally,” he explained. “That can only be done under a general amnesty.”

According to the Russian Ministry of Justice, the case of another Russian citizen, pilot Konstantin Yaroshenko, who was sentenced to 20 years in prison for conspiracy to smuggle a large consignment of cocaine into the U.S., will also be examined with a view to extradition.

This article has been abriged from the original, which can be read in Russian in the Kommersant newspaper.