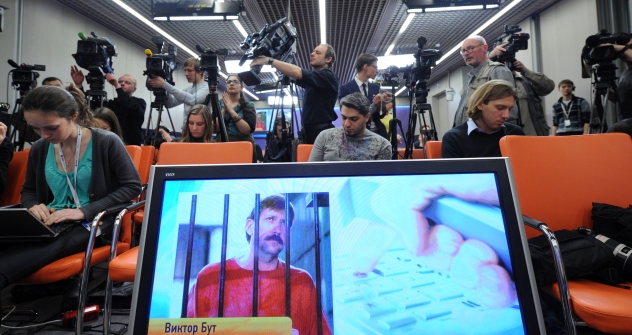 Moscow : Journalists sit near a screen displaying convicted Russian arms smuggler Viktor Bout in Moscow, on April 12, 2012, during a teleconference with Bout from his US prison. The unusual teleconference involved a video link between Moscow and a Ne

For the U.S., he is the prolific arms smuggler portrayed in the 2005 film, “Lord of War.” For Russia, he is a martyred citizen convicted, in part, by a Hollywood film.

Moscow fought the legitimacy of the U.S. federal court case against Victor Bout every step of the way. Bout was sentenced to 25 years in U.S. prison last month. Just as interesting as what came out in the courtroom is what didn’t come out—his not entirely resolved history with the U.S. government and American businesses.

It took less than an hour last month for Federal Court Judge Shira A. Scheindlin to reach a verdict in the four-year-long high-profile case, “United States vs. Victor Bout.”

Related: What will happen to Bout?

But a month later, Moscow is still stinging from what the Russian Foreign Ministry considers the extra-territorial nature of the case—the prosecution of a Russian citizen after a sting operation in Thailand— and said that it intends to bring 45-year-old Bout back to Russia. Some observers thought a deal might be reached between the United States and Russia regarding the controversial figure; Bout is known as the merchant of death in the United States and a martyred businessman in his native Russia.

Bout pleaded not guilty to charges of conspiring to kill Americans with the weapons he apparently tried to sell in Thailand. He faced life in prison, but received the minimum sentence of 25 years behind bars and a $20 million fine—a deep disappointment to federal prosecutors.

U.S. Drug Enforcement Administration special agents nabbed him in a thrilling Hollywood-style sting operation, which resulted in Bout’s arrest in Thailand in 2008 and his subsequent extradition to the U.S. in 2010.

However what didn’t come up in court is the fact that companies associated with Bout made money from the U.S. government. Some American companies also may have had ties to Bout.

According to U.S. Treasury documents, the Pentagon was working with at least two air cargo companies belonging to Victor Bout in 2004 to 2005, when his planes made dozens of flights back and forth to Baghdad. But the U.S. government said they did not know that Bout owned or was associated with these companies. Former President George W. Bush’s Deputy National Security Adviser Juan Zarate told 60 minutes that hiring Bout was a mistake.

Experts who have tracked Bout have said that there needs be a public accounting for American companies that colluded with Victor Bout in the past. “There was U.S. law prohibiting U.S. companies and U.S. government agencies from doing business with Victor Bout, there were U.N. sanctions in place and yet these companies violated,” these rules, Kathi Lyn Austin told CNN. Austin investigated Bout’s activities for the United Nations.

Bout was prosecuted for trying to sell a large package of arms to representatives of the Revolutionary Armed Forces of Colombia who were undercover informants for the DEA.

The DEA informants who testified against Bout had criminal backgrounds themselves as cocaine traffickers and were paid by the U.S. government.

Moscow said the verdict was "baseless and biased." The fact that the judge did not impose a life sentence – something that Preet Bharara, the U.S. attorney in Manhattan was pushing for – meant that the prosecutors failed to make the strongest case against Bout, observers said.

Judge Shira A. Scheindlin said in court that there was no evidence presented to support the claim that Bout had anything to do with terrorism. The Judge added that Bout wasn’t voluntarily seeking an opportunity to sell arms until he was engaged by the DEA, which lured him in a sting operation.  Bout’s lawyer, Albert Dayan, called this case politically motivated. He tried to make the case that the U.S. government not only overstepped its mandate and applied American law to a foreigner in a third country, but also was enforcing a “political order” from the White House.

“In the case of Victor Bout, it is not a question of discovering the commission of a crime and then looking for a man who has committed it. It is rather a question of picking the man and then searching the law books or putting investigators to work to create and pin some offense on him” Dayan told RBTH. 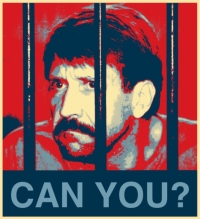 RBTH interviewed Bout one year ago, in April 2011, at the notorious Metropolitan Correction Center (MCC). “This myth was intentionally created and money has been invested in it as if it were a trademark,” Bout said then about his nicknames—“lord of war” and “merchant of death.” Bout spent more than a year at MCC in solitary confinement.

Awaiting transfer to a maximum security prison, Victor Bout still thinks he will get back home. “I’ll get back to Russia. I don’t know when, but I feel sure that sooner or later this will happen,” he said.

Victor Bout was born to Russian parents in Tajikistan in 1967. He attended the Soviet Military Institute for Foreign Languages in Moscow and ultimately learned to speak six languages fluently.

According to some accounts, Bout worked for the K.G.B. in Angola when the Soviet Union dissolved in 1991. In an interview with The New York Times in 2003, he told the reporter he had never been with the K.G.B. and that his mother cried when she heard those reports.

Bout also explains his business to reporters as air-freight and cargo operations.

Before expanding to Europe, he worked in Angola, Congo and other African countries. He told The New York Times reporter in 2003 that he witnessed how “Western donations to impoverished countries, often in the form of state-of-the-art industry, lead to the destruction of social and ecological balance, mutual resentment and eventually war.”