Russia’s ‘Tower of Babel’ auctioned off 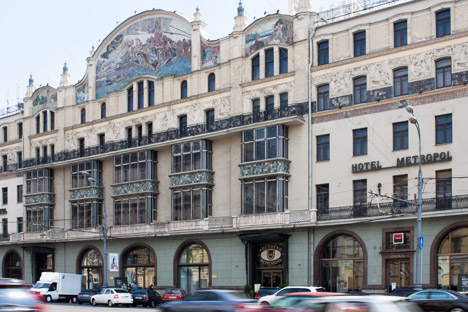 The new Metropol owner will be responsible for preserving the cultural legacy of the hotel (pictured). Source: ITAR-TASS

Moscow’s oldest Hotel, the Metropol, has been sold to the Azimut Hotel chain.

The imposing building of the Metropol Hotel, a stone’s throw away from the Bolshoi Theatre, is encircled by a majolica belt that features a quotation from Friedrich Nietzsche: ‘And then again, the same old story! When we have finished building our house, we suddenly notice that we have learned something in the process.’ Once you step inside the hotel, you feel as though you have entered a very special museum, where you will sit in old chairs, sleep in century-old beds, use antique tableware and put flowers in vases that are more than a hundred years old. The Metropol is still a place for the select few; ordinary tourists and Muscovites can only enjoy a rare tour of the building.

Nevertheless, there was barely any haggling to be seen yesterday, as the Moscow authorities sold the Metropol Hotel for 8.9 billion rubles ($275.6 million) to Alexander Klyachin, owner of the Azimut Hotel chain.

Moscow’s five-star, 424,000-square-foot hotel complex features 362 rooms, including 72 suites; it is one of the most significant architectural landmarks of the modern era. Recent guests of the hotel have included the King of Spain Juan Carlos I, former French President Jacques Chirac, Kim Jong-il, Hu Jintao, Montserrat Caballé, Pierre Richard, Sharon Stone and Gérard Depardieu. During its heyday in the mid-20th century, the hotel accommodated equally distinguished guests such as Bertolt Brecht, Bernard Shaw, Mao Zedong and John Steinbeck.

A Tower of Babel for the 20th century

Construction on the Metropol began in 1889, in large part due  to the efforts of  the prominent Moscow philanthropist and entrepreneur Savva Morozov. It took six-and-a-half years to build, and, when it was finished, Muscovites immediately christened it ‘The Tower of Babel of the XX century.’ It stood out not only for the originality of its design, but also for the fact that it was equipped with state-of-the-art facilities, including electric lifts, hot water, refrigerating machines and special ventilation systems. Seven years later, the first two-screen cinema in Moscow, ‘The Modern Theatre’ opened in the Metropol.

In the early 20th century, the Metropol’s many restaurants were frequented by celebrity actors, as well as bass opera-singer Feodor Chaliapin and composer Sergei Rachmaninoff.  The Boyarski restaurant, which was originally named ‘Russkaya palata’, was Rasputin’s favorite place to dine and go on his famous binges.

After the victorious proletarian revolution of 1917, this three-bedroom suite became home to Georgy Chicherin, the People’s Commissar for Foreign Affairs. Little has changed here since 1917 – the room still has the same sofa with carved lions, the old piano and the Venetian armchair. Since Chicherin, King Juan Carlos of Spain  and North Korean leader Kim Jong-il have been among those who have stayed in the suite. The latter stayed here anonymously and, according to staff, appreciated the  sauna most of all. He also noted that all of the windows in the suite overlooked Lubyanka Street. ‘We have had them all,’ said the staff at the Metropol.

Nietzsche’s quote encircling the Metropol was then extended to include Lenin’s ‘Only the dictatorship of the proletariat is capable of liberating mankind from the pressure of capital.’ Unlike the original inscription, you can see this phrase perfectly well on the façade.

In the late 1920s, the Metropol was restored to its original status of world-class hotel and began catering for foreign guests, something it had not done before the revolution.

In 1931, writer Bernard Shaw was accompanied to Moscow by the Astors, an aristocratic British family. Lady Astor brought a two-week supply of food  with her to the Mteropol, fearing there would be shortages in Russia; she had  to give away all of her cans of food to the hotel staff before she left.

Witness of the Khrushchev Thaw

Legend has it that it was in the lobby of the Metropol that Sergei Yesenin fell to his knees and first professed his love for Isadora Duncan. It was a Mteropol restaurant that the cellist Mstislav
Rostropovich met Bolshoi Theatre opera singer Galina Vishnevskaya in April 1955. The legendary singer Alexander Vertinsky, after he was allowed  to return to Russia and before he was given an apartment in Tverskaya Street, lived in one of the Metropol rooms with his wife and daughters Marianna and Anastasia. After renovations were carried out in 1986, the hotel was opened for business once again. In 1993, Michael Jackson stayed in the hotel and offered to buy an old lamp with a bear-shaped handle. As of today, there are more than 800 antique items in the hotel. Some of the interior items have alarm systems attached, just like museum exhibits.

Sale of the Metropol

The presidential suite is currently available at 80,000 rubles (about $2,500) per night. The Metropol is the third Moscow hotel to be auctioned off by the municipal authorities. In December 2011, Sait-Salam Gutseriev’s Smarts Finance Group acquired  the National Hotel for 4.5 billion rubles ($139 million). Earlier, the Hotel Ukraine was sold for 190 million euros ($239 million).

The new Metropol owner will be responsible for preserving the cultural legacy of the hotel – Klyachin will own the the building itself, while the antiques (furniture and paintings) will remain in ownership of the state.